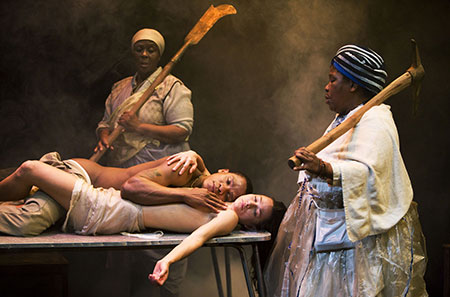 The story takes place 18 years after the end of Apartheid, on the midsummer’s eve of the election of Nelson Mandela’s National Freedom Day. On the backdrop of a desolated farmstead’s tension-filled kitchen, Julie (played by Hilda Cronje), the daughter of a White Afrikaner landowner, John (played by Bongile Mantsai), the Black Xhosa son of her father’s servant, and Christine, Julie’s former nanny and John’s mother, all interact in thought-provoking ways.

As World Stage artistic director Tina Rasmussen, who first saw the play at the Edinburgh Festival Fringe in 2012, recently told AfroToronto.com: “When there's a large socio-political shift, such as Perestroika or the like, the rest of the global world sort of moves on; but there remains concrete tensions and hangovers. The affected societies grapple with having to reconcile, in this case with the legacy of Apartheid from within in a post-Apartheid state some 20 years later. There are undoubtedly wounds and scars. How does the society come to terms with that?”

It is of particular significance that the farm where the action is set is built on an ancient burial ground. As Rasmussen further expounds, “the idea of legacy around ancestral burial rights informs a broader global debate about the rights of first nations people -- be in is South Africa, Australia or Canada.” During the play John and Julie confront each other on that thorny topic. They argue about the land’s proprietorship given the fact that both of their Boer and Xhosa ancestors are buried there.

In addition, much like the sexual dynamics underlying the class, power, and gender relationships in the original Strindberg version, Yaël Farber’s Mies Julie tackles the interracial underpinnings in Julie and John’s tempestuous relationship. How does John come to terms with confronting the generations of attacks against his blackness and manhood? How does he react to Julie and what she represents? How do they each fit both individually and in relation to each other in a post-Apartheid world?

In order to further explore those themes, the Harbourfront Center will hold pre and post-show talks featuring the playwright, artists as well as academics from the University of Toronto (Denise Cruz and Alan Ackerman) and York University (Marcia Blumberg). The guests will offer their perspectives on Strindberg’s message, the ideology behind the play, the current relevant context, and examine South African theater in general. The post-performance talkshow will take place on Wednesday, May 7th and the pre-show event is scheduled for Thursday, May 8 (admission is free with the purchase of a ticket to Mies Julie).

Earning rave reviews, the play has been touring in over 100 venues around the world. As part of the work’s first Canadian representations, it arrives in Toronto following shows in both Vancouver and Montreal.

Tickets for Mies Julie and other World Stage 2014 productions are available via Harbourfront Centre’s Box Office. Patrons can call 416-973-4000, visit 235 Queens Quay West and/or go online for all ticket inquiries.