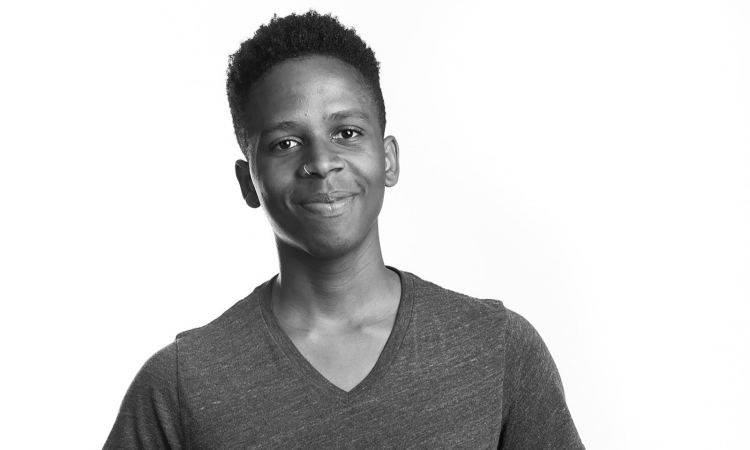 One of the central characteristics of the immigrant experience is the need to define one's place in a new land, and new culture, while finding the best way of incorporating, or not, one's own cultural roots into a new narrative. In his play speaking of sneaking, Jamaican-born and raised emerging artist daniel jelani ellis, who has immigrated to Canada in 2004, explores those themes -- also incorporating his queer identity. Playing at the Theatre Centre until May 11, as part Why Not Theatre's The RISER Project 2018, speaking of sneaking investigates the complex relationship between immigration and displacement, yard and foreign, home and abroad. The play is directed by d’bi.young anitafrika and choreographed by Brian Solomon.

Speaking to AfroToronto recently, daniel took us back through the evolution of the play. I learned that working on speaking of sneaking gave him an outlet to stay grounded in his culture at times when he felt disconnected from home.

"It was an outlet where I could be Jamaican on my own terms," as he shared.

When Buddies in Bad Time Theatre artistic director Evalyn Parry asked daniel at the genesis of his journey to come up with a central question he wished to explore, at the time it was: "What is the language of an uprooted black queer body."

"Those are still things that I’m fascinated by and exploring in this piece but I expanded it to include physical vocabulary and movement. But looking at same ways that code switching occurs. What happens to your body? How to you switch up … how the choreography plays into it," he said.

Finding his voice and artistic identity

The journey which ultimately led to speaking of sneaking, in its current form, began when daniel successfully applied to be part of Buddies in Bad Times Theatre's Emerging Creators Unit in 2012. Selected to be one of only four participants, each paired with a director, he was tasked to write a 25-minute show for the Rhubarb Festival. Previous to that, he had taken part in PrideCab, a program for queer youth at Buddies, where he was able to examine how his own queer identity fit within the collective queer history. He described these formative experience at Buddies in Bad Times Theatre as "a really useful, healing and awesome space for me."

As an associate director for Black Boys and Dark Love at Buddies in Bad Times Theatre, he also admittedly faced his own misconceptions and prejudices about blackness.

"A whole important aspect of what Black Boys was exploring was that blackness is not a monolith. I was realizing that, yeah, some of my ideas about blackness is aligned with that. ... I think the Caribbean queer identity is a bit of a unique identity."

"It’s been a tough thing to reconcile. I don’t think it’s fully reconciled. It’s a constant negotiation," as he acknowledges.

Even after moving to Canada, it would be an illusion to believe that homophobia would not be an issue anymore. Racism is another form of oppression that is encountered. How can blackness and queerness coexist? "Apparently not in foreign," he said.

"In my experience, it's a matter of finding your own community and taking up the space. At first it may seem pretty isolating and that there is no space but it's there. It takes initiative but there is a community," as he expressed.

Finding meaning and purpose as "the other"

Following his experience at the Emerging Creators Unit, daniel felt more determined than ever to pursue and hone his craft. He felt that if he were to be taken seriously he needed to get proper training. He had previously dropped out of a theatre studies program at UofT after two years because of the lack of hands-on and practical experience he was getting. Since he ultimately did obtain that experience at Buddies, he felt he was ready to pursue his studies at the National Theatre School in Montreal.

While at NTS, the intensive nature of the program (six days a week and twelve-hour days) allowed him only to work on speaking of sneaking during his down time. Nevertheless, it was a necessary thing for him to continue pursuing. "I was feeling very disconnected from my home and my culture," as he recalled.

It was a way to force himself to go outside of the NTS community bubble and forge friendships with people outside of that overwhelmingly white space and mingle with diverse and queer people. Describing his experience as the only black member of his NTS class, daniel recounts:

"It was really challenging. I was finding that it’s either I was the authority on all things black, on all things Caribbean and all things Jamaican. As the only black person in my class I was looked upon to speak on those things. But then, in the same breath, I was also asked to leave all that at the door at the same time."

"There are expectations that there’s a general way that we’re all going to be trained and there’s no room for any analysis of your intersecting identities. They don’t want to hear that I’m a Jamaican who had just been living here for eight years and a queer person. They didn’t want to hear any of that. Unless we were reading a play that featured black people and then they were looking to me to speak to it."

"It was a very complex time for me and a source of lots of anxiety. And this is where speaking of sneaking was an outlet for me."

An opportunity to revisit the story

After graduating from the National Theatre School, daniel heard about a call out from the festival director at Rhubarb, Mel Hague, for a new program she was mounting called The Rhubarb Haunted House. It was a space for old works that had premiered at Rhubarb, a festival highlighting new works, to be revisited.

It was a great opportunity for daniel to pick up speaking of sneaking from where he had left off.

“So I was working on it and from a new place after having trained at NTS and spent more time as a Canadian, as a theatre artist, I found that my experiences were different,” daniel said.

He submitted an application and was invited to be part of the installation.

"I rediscovered my interest and my excitement for it. I continued to expand it because it was only twenty-five minutes at the time."

He feels honoured to have this latest incarnation of speaking of sneaking being directed by d'bi.young anitafrika. “It is awesome, it is truly truly a dream come true,” as he expressed. Just a few months after moving to Canada, he recalls seeing d'bi perform on stage in early 2005 as part of Da Kink in My Hair.

“It was a landmark moment for me. I saw d’bi on stage; she was a standout in that production and ever since that moment I drew inspiration from her, aspired to her incredible artistry," he said.

After following her ever since, he finally had a chance to perform with d'bi in her show Lukumi: A Dub Opera. "That was another landmark moment. I could see her work on a thing she had created. So yes, now it feels like another level in terms of sharing a space with her. What I’m most grateful for and aspire to is her integrity, her artistry and her humanity. They are all wrapped up."

An important aspect of the dramaturgy and their collaboration is the use the Anitafrika Method in the crafting of the piece. “This is a system that she also uses for life coaching to help people in self-actualization so they can really realize the full potential of themselves,” as daniel explained.

"It’s not entertainment done for entertainment’s sake. Yes it going to be entertaining; but it’s also going to be really reflective and introspective and a bit antagonizing in the sense that it will hopefully cause me to want to be agitated about things that we’re identifying. All this I credit to d’bi."

speaking of sneaking
created and performed by daniel jelani ellis
directed by d’bi.young anitafrika | choreographed by Brian Solomon
May 2-11, 2018
an sos collective production