Nothing really big opening this weekend.  But the smaller films are worth a look especially NO.

A 911 operator, Jordan (Halle Berry) receives a distress call from a kidnapped teen, Casey (Abigail Breslin from LITTLE MISS SUNSHINE) and realizes that she has encountered this serial killer before.  Determined not to make the same mistake that killed the first victim, Jordan goes all out to save the teen.

For a small budgeted little thriller, director  Anderson no stranger to the horror film genre (SESSION 9, THE MACHINIST) has concocted quite the edge of the seat suspensor, using the basics like camera placement, pulsating music down to the modern technology displayed at the 911 Centre (nickname ‘the hive’).  THE HIVE was the original title of the film.

It helps too that the villain of the piece is a believable psychotic, aptly played by Canadian Michael Eklund.  One can tell when the audience applauds at the film’s end when he finally gets his come-uppance.  Berry does a fine job as well as does Breslin showing both fear, strength and determination as the troubled teen.

But Anderson’s film is not without its flaws.  The script conveniently has Jordan’s boyfriend have the role of a cop (Morris Chestnut) investigating the same kidnapping.  The film also contains uncomfortable intercutting at the start with Jordan’s work and Casey’s day at the mall.  The script also totally omits Casey’s family in all this, the only mention being her wanting to see her mother again.  The film generates additional interest though, with the introduction of the kidnapper’s family, brief though it may be.  The discovery by Jordan of the kidnapper’s lair is a bit far-fetched when the cops are unable to discover anything.

Yet as a taut thriller, THE CALL lives up to its title and delivers the scares and suspense.  Audiences should not complain.

From the film title GREEDY LYING BASTARDS,one can tell that Activist and filmmaker Craig Rosebraugh has very little regard for his subjects as he attacks the organizations that cast doubt on climate change in order to further company profits.  And with good reason.  Who would have nothing but disgust for those who want to destroy our planet for the purpose of monetary gain?

Despite the very angry tone of the documentary, Rosebraugh shames ‘the bastards’ in a winning fashion, often playing them at their own games.  The film also details communities that are directly affected by global warming, such as Inuit communities at the Arctic.

But most hilarious and effective at the same time, is Rosebraugh’s final list of bastards from the senators to bogus scientists.  His favorite target is a Lord Christopher Monct who supposedly is a Lord but exposed as a complete fraud at the end.  Rosebraugh, who appears as himself in the film is depicted as a humble knight in shining armour travelling from one convention to another, exposing those GREEDY LYING BASTARDS.

But the results of all the climatic conferences are not new.  Many documentaries have echoed the same frustrations.  The solution, is the same and the only way is for each individual to do her/his part.  How?  Like all the other docs, wait for the end credits and there will be a few websites one can connect to in order to obtain more information and to offer help.

The film also offers scary images of Hurricane Sandy, wildfires in the West and “Brown-Outs” in the East.  Farmers are losing crops to the worst drought since the Dust Bowl as disheartened communities are shown banding together to fight useless government agencies supposed to help regulate oil corporations.

Bastards numero uno are the Koch Brothers and numero duo is the Exxonmoblil Oil Company.   Rosebraugh marks its clear how the audience can do their part to save the plant and embarrass these bastards.  Of course, the website has the glorious word, bastard in it. 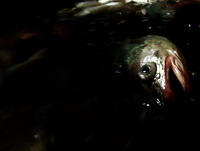 LEVIATHAN is not about some monstrous sea creature but a documentary about fish, ugly fish and more ugly fish.  Dozens of cameras (handheld) are tossed between cameramen and fishermen to capture the wild life of seafarers.

LEVIATHAN belongs to that category of documentary in which there is no voiceover.  Even the characters in the film that engage in conversation are barely audible or their dialogue meaningful.  What the audience has to contend with is therefore their interpretation of the images on screen.

These images are not that pleasant.  The film starts with a night catch segment in the rain. One can hardly make out what is happening half of the time.  When the camera moves into the light in the boat, the audience is offered a fish eye view of events.  The camera is often at fish eye level and the audience sees dead fish with bulging eyes or other disgusting sea creatures caught in the net.  Otherwise, the camera is on the fishermen gutting the fish or cutting off the fins from the stingrays.  The directors appear fascinated, if not obsessed with ugly images as their art.  Apparently, there is a market for these images as they have been granted some exhibition in the U.S.

Once all the catch been sorted, the refuse is dumped into the sea.  The sea birds have a field day and again, the camera goes into weird positions to capture these segments.  The segments remind one of Hitchcock’s THE BIRDS.

Other segments make no sense at all.  These mainly show the crew doing their thing.  One shows one of them in the shower, scrubbing and scrubbing.  But not to worry, as no genitals are shown….nor faces.

If one decides to see LEVIATAHN for whatever reason, be prepared for a weird experience, that might be satisfying or not, that is if one can make out what is happening on screen.  A sea monster of a documentary!  One might never eat seafood again after viewing LEVIATHAN.

The star of this film is Mexican Gael Garcia Bernal who plays a savvy young ad exec, who makes use of their designated fifteen minutes per day of airtime to craft the political opposition''s publicity campaign when the rule of dictator Augusto Pinochet is put to a national plebiscite.

The history goes on like this: In 1988, succumbing to international pressure, General Augusto Pinochet''s regime in Chile called for a national referendum on the proposal to extend the dictator''s presidency a further eight years. The ballot presented two choices: Yes (extend Pinochet''s rule) or No (no more Pinochet).   Much of the population believed that the referendum would be rigged, and was merely a front to placate the international community.  There was also the problem for many that participating in the referendum would legitimize it. But many in the opposition did not want to pass up this opportunity to peacefully overthrow Pinochet''s near two-decade reign.

This is director Larrian’s (TONY MANERO, POST MORTEM) account, though biased against Pinochet of how René’s NO campaign eventually won.  For s historical political drama, NO is pretty hilarious and the lightest of Larrain’s three films, while still hitting the mark in riling the audience up against Pinochet.  NO also is believable in that it still maintains René’s stand for staying commercial during all the execution.

The film was nominated for this year’s Best Foreign Film Oscar but lost out to AMOUR.