Two major surprises opening this week!  First good surprise is ADMISSIONS is a sure-fire hit comedy and the other sadly is the disappointing THE CROODS.

Credit to Karen Kroner’s bang on script and director Paul Weitz (ABOUT A BOY, AMERICAN PIE) that this new comedy hits all the right spots.  All the current issues such as aiding 3rd world countries, getting a good education, adoption (just to mention a few) hide the fact that ADMISSION is essentially a romantic comedy on how two strangers meet and fall in love.  And what a romantic comedy!  The best one to be seen for a long time.! And judging from the extremely funny script just from the first 10 minutes (I was laughing out loud so hard), ADMISSION is a sure winner.

The story concerns a straitlaced Princeton University admissions officer Portia Nathan (Tina Fey) caught off-guard when she makes a recruiting visit to an alternative high school overseen by her former college classmate, the free-wheeling John Pressman (Paul Rudd).  The film gives equal time to male and female, not taking sides – something rare in films these days.  Pressman has surmised that Jeremiah (Nat Wolff), his gifted yet very unconventional student, might well be the son that Portia secretly gave up for adoption many years ago. Soon, Portia finds herself bending the rules for Jeremiah, putting at risk the life she thought she always wanted -- but in the process finding her way to a surprising and exhilarating life and romance she never dreamed of having.  But the script is full of both surprises and related subplots.  There is never a dull moment or a stretch in which there re no laugh out loud moments.

Fey and Rudd make a good screen couple.  Wallace Shawn (MY DINNER WITH ANDRE) steals the show as Clarence, Portia’s boss, even though he has nothing to say that is funny.  But Lily Tomlin as Portia’s mother is a real prize.  But great performances all around from even the kid actors.

The comedic timing is what makes this film so entertaining.  The timing can be observed for example in scenes when Portia’s ex’s (Michael Sheen) new girlfriend always shows up to edge him on his way.  But the key to this romantic comedy working is that the romance appears to play second fiddle to the other part of the story involving Portia trying to get Jeremiah into Princeton at all costs.  The fact that a mother would do anything, yes anything to see her son do well is something very believable.

Shot also at Princeton Campus, ADMISSION is a must-see for an overall good time!

THE CROODS is a 3D animated family adventure comedy, the first collaboration between Dreamworks and 20th Century Fox directed by Kirk DeMicco and Chris Sanders (HOW TO TRAIN YOUR DRAGON).  The story concerns the Croods a cave family forced to look for a new place to settle after an earthquake, attributed to continental shifting destroys their home (cave).  In the process, the family not only discovers new territories but a few of life lessons as well.

THE CROODS is surprisingly built upon other successful animated features.  The heroine of the story is Epp (Emma Stone), the brave daughter who breaks the rules set on the family by father Grug (Nicholas Cage).  This treads on last years BRAVE heroine as the family in peril is reminiscent of THE BORROWERS.  The several earthquakes that occur (it seems only too convenient for another to occur just as the film starts to drag) are of course, ICE AGE material and the many animals in the movie similar to MADAGASCAR.

Into the picture comes a boy with brains (Ryan Reynolds) to help the family out.  Nothing is said of where he comes from or his family background.  Though the film has a main story line, the bits in between appears to be hastily put together strung together with earthquake occurrences.

The film contains no exciting or suspenseful segments.  The chases like the egg one (which is a tad too long) at the film start are played mostly for laughs.  But the comedy is mediocre at best with no sharp lines or goofy humour found in say the SHREK films.  The action is not layered as in the SHREK or last year’s PIRATES BAND OF MISFITS.

The result is a disappointing unimaginative feature that relies on retreaded material that is all too easily recognizable. 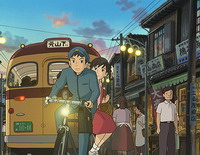 This animated feature from Japan’s Ghibli Studios is one to watch as it is the first directed by Goro Miyazaki, the son of the famous legendary Master, Hayao Miyazaki.  POPPY HILL is written by the father and the animation directed by the son.  Unlike most of the father’s films, this one has no mythical theme, no fairies or spirits or folklore.  The film follows Umi, a shy teenaged girl, who manages a boarding house on the Yokohama seaside. Her father was killed in the war and her mother travels constantly, so in addition to attending high school, Umi must also run the family business. Her classmate Shun, an orphan unsure of his lineage, lives with a few other students in the old high-school clubhouse, a French-style, mansion that’s set to be demolished as part of the current modernization project.  The two meet and it is love at first sight.  The story is not all that important but the setting and atmosphere are.  The post-war pre-Olympics era is effectively evoked.  POPPY HILL will win audiences on pure charm alone.  Sentiment is overdone occasionally.  Miyazaki also evokes the old famous tune SUKIYAKI from the early animated feature ALAKAZAN THE GREAT, a song not heard for a long time.  It would be good to see this film in original Japanese with English subtitles before the Disney studios dub the dialogue in English with stars like Dakota Fanning and Freddie Highmore.

The undercover police mole in crime organization is a premise that has been exploited successfully in films like THE DEPARTED and INFERNAL AFFAIRS.  NEW WORLD is a South Korean crime action drama similar in plot to these two films, but memory will fade for many moviegoers, even for fans of those two hits.

Undercover cop Lee (Lee Jung-jae) remains undercover even though he wants to get out.  He is nervous for his girl is pregnant and he stands very close to being exposed, especially after computer hacklers have hackled into the police files.  As the film begins, the big crime boss dies in a car accident after visiting his mistress, the accident suspected to be orchestrated by one under thinking of taking over the organization.  One of these is Lee’s crazed ‘bro’ (Hwang Jun-min) whose temper gets him in more trouble than expected.

Director Park’s (I SAW THE DEVIL) film is full of twists and turns.  Not only action but also suspense abounds, and the film is a neat compelling watch from start to end.  Park includes a most exciting middle half when Lee is about to be discovered for his cop activities.

At times, the film feels like THE GODFATHER for the way mobster competition are done away with.  The violence is just as disturbing with blood and guts ripped off ever so often.  NEW WORLD is so called for the new name the police operation is so-called when a new mob successor is to be found.

As far as Korean films go, the recent THE THIEVES proved how good Koreans are at coming up with slick, high-class heist capers.  NEW WORLD proves again that they have what its got to produce an exciting crime thriller and drama.

Never a dull moment and never short of surprises, NEW WORLD is one of the best foreign flicks to open this year.

OLYMPUS (the secret service code for ‘the white house’) HAS FALLEN is the kind of action flick similar to INDEPENDENCE DAY that rallies Americans to feel good about the United States and thus about themselves.  The story deals with the White House being infiltrated with the American President (Aaron Eckhart) held hostage.  Of course, every American would love to see the terrorists involved brought down to their hands and knees and this film has terrorist Kang (Rick Yune, who also played the Bond villain in DIE ANOTHER DAY) have his brains carved out with a knife by hero Mike Banning (Gerard Butler).  Cheers are in order as is the money likely flowing through the box-office.

The trouble with Fuqua’s film is that the whole film on the whole does not make a whole lot of sense.  The real reason for the White House take down is not important enough.  How the entire infiltration is orchestrated is quite implausible, considering that everything is masterminded by just one man, Kang.  Also there is the fact that Agent Banning being reduced to desk duty has not that much to do with the plot though the subplot makes interesting fodder.  But the little parts of the film are what make the film tick.  The initial segment Banning failing to save the President’s wife (Ashley Judd); the release of a kicking and screaming Melissa Leo (as Secretary of Defense); the individual action sequences are all executed with exhilarating spirit.

The story is simple enough.  It deals with Agent Mike Banning, a Secret Service agent assigned to Presidential Detail.  After a tragic accident, he is demoted and assigned to desk duty. When the White House is captured by terrorist Kang with the President and a few of his aides held hostage, Banning finds himself trapped within the building.  As the National Security Team led by House Speaker Trumball and General Clegg (Morgan Freeman and Robert Forster) scrambles to respond, they are forced to rely on Banning''s inside knowledge to help retake the White House, save the President, and avert an even bigger disaster.

Fuqua has also not forgotten to include humour to lighten the load on what could be a heavy laden piece.  The humour comes in odd spots such as a telephone call between Banning and wife (Radha Mitchell) in the middle of a medical operation.  President Detail is also shown kicking ass as a President who boxes with Agent Banning.

Best Animated: From Up Poppy Hill