Opening this week are THE SAPPHIRES and LOVE, MARILYN.

Made up primarily of old footage and interspersed by interview enactments performed by well known actors, this doc/enactment Marilyn Monroe biopic fails to offer any substantial new information or insight to the life of the star who everyone knows took her life from an overdoes of sleeping pills.  A number of actresses (including Viola Davis) play Marilyn but one wonder the choice behind some of the pickings, the oddest being Adrien Brody playing Truman Copote.  Clark’s film plays the star as a victim of the Hollywood studio system while still being able to hold her own within reason.  The film is perhaps more suited to younger filmgoers who would otherwise obtain an acceptable enough history lesson on the life of Marilyn Monroe.  Love?  That is up for

the audience to decide.

Originally entitled FINDING NORTH, A PLACE AT THE TABLE initially examined the hunger faced by the northern U.S. settlement of Collbran, Colorado.

But the film settles on 3 subjects who face the problem of hunger.  The filmmakers define hunger as the problem faced when one does not know when the next meal comes from.  Barbie, a single Philadelphia mother who grew up in poverty and is trying to provide a better life for her two kids; Rosie, a Colorado fifth-grader who often has to depend on friends and neighbors to feed her and has trouble concentrating in school; and Tremonica, a Mississippi second-grader whose asthma and health issues are exacerbated by the largely empty calories her hardworking mother can afford.

The directors intercut the routines faced by these three, interviews with food exports and policy makers as well as footage on relevant material.

The film also takes the usual path of attacking easy targets like the government and multi conglomerates.  There is footage from previous and past Presidents including Clinton, Reagan, Bush and Obama recognizing and vowing to solve the hunger problem at home.  But the numbers have now grown to 50 million people in the U.S., one in four children.  The film emphasized the only short period of time in the early 70’s under he Nixon Administration when hunger was actually kept under control.

The film appears to be not a real eye-opener at first as most would know that there is hunger around us.  But the directors offer a few interesting points such as the difference between hunger and starvation (though the word starvation is never used), the presence of food deserts and how obesity is tied closely with hunger.  Hunger is shown to be the result of poverty while starvation the shortage of food.  The U.S. is emphasized to be the richest nation in the world and not short of food, but where poverty is abundant.  The psychological effect of the hungry is emphasized.  As the film progresses, other important facts are put forward.  For example, the audience sees a fully employed mother not ale to put food on her table fro her children as her full time job disqualifies her family from food stamps immediately.

Actor Jeff Bridges speaks his mind and puts in his important two cents worth on the topic.  Bridges has been an active advocate in the end hunger program for decades.  Music is by T-Bone Burnett and The Civil Wars.

Besides the depressing nature of the documentary, the film contains a few high points, such as when the children learn about nutrition or when fellow Americans help out with the good banks.

The solution?  As expected, the solution is up to the individual.  And particularly up to the U.S. for the American problem of hunger there.  The audience is to write or make their say as well as do their part in donations.  For Canada, the spokespeople of FoodShare, will be available to provide local and national perspective on issues of hunger and food policy in Canada. 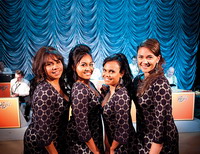 THE SAPPHIRES is a rise to singing fame of Black singers similar in theme to DREAMGIRLS.

This is as far as the similarity goes.  The minority singers here are Aborigines and the setting is Australia.  All the actors are unknown except Chris O’Dowd, the familiar face of the actor who played Kristen Wiig’s love interest in BRIDESMAIDS.  THE SAPPHIRES (the original group name to difficult to pronounce) is 4 girls, sisters and a cousin Gail (Deborah Mailman), Julie IJessica Mauboy), Kay (Shari Sebbens) and Cynthia (Miranda Tapsell) who travel to  Saigon, Vietnam with their manager (Dowd) and make I back with success and romance.

THE SAPPHIRES is a feel good movie.  There is little bad happening except for perhaps the part when the lead singer has t be told that her voice is not good enough to be the lead.  The funny lines are really funny and the film contains lots and lots of catchy ‘soul’ searching songs.

The film is a period piece set in the 60’s and is based on the play by Tony Briggs of the same name which itself is based on a true story.  The real characters are shown in photos during the end credits to show the audience what has transpired is not a made up fairytale.  There is a lot to be learnt about Australian culture in the film a well.

So what is there to dislike?  Nothing!  THE SAPPHIRES is contagious fun – and good clean, fun for the whole family.  And the film will have you dancing, if not singing in the aisles.

THE SAPPHIRES broke all Australian weekend records last year but it failed to do that well intentionally.