It is Ethan Hawke week.  Two new films BEFORE MIDNIGHT and THE PURGE open.  The first of the end of the world films THIS IS THE END makes its debut Wednesday.

Starting off with BEFORE SUNRISE and BEFORE SUNSET, the third in the trilogy of romance between Jesse (Ethan Hawke) and Celine (Julie Delpy) is pretty much more of the same.  The American and French who met years back on a train in Europe are still in love.  They make love, argue and talk, talk and talk.  If smart talk is not your cup of tea, then avoid BEFORE MIDNIGHT at all costs.  If you don’t mind the occasional banter, which a times turns pretty clever, then you are in for quite the treat.

Jesse has divorced his wife (not seen in this film) and is now married to Celine with two daughters and living in Paris.  But the film is set in the Greek Islands, where they are vacationing.  Jesse has just said to goodbye to his son from his wife and feels guilty as hell for not being there in the States for him.  He secretly wishes Celine move with him to Chicago so that he can be with his son.  No way for Celine, who has just found her dream job.

So sets up the big argument for the couple, which is part of the premise for the movie.  They each argue their points, almost break up, and discover that the love for each other still binds.  All this happens amidst smart talk, written by Linklater and actors Delpy and Hawke.  Though it is all an obvious set up, the film still grabs and moves as there is some truth in their arguments to very couple’s encounters.

The climax of the film is the reconciliation of the couple.  Jesse seeks out Celine, angry and sitting lone outdoors at a cafe BEFORE MIDNIGHT.  He practically woos her again.  That makes the movie.

Love or hate the BEFORE series of movies, one cannot deny the chemistry between Julie Delpy and Ethan Hawke.  They obviously bring their own personal baggage into their characters as well.  The series always contains interesting dialogue!

THE KINGS OF SUMMER originally titled TOY’S HOUSE tells the story of three kids, the kings as they decide to build their own house in the middle of the woods, away from their parents and authority.  They thus rule as kings and hence the film title.

The main protagonist is Joe Toy (Nick Robsinson), escaping his single father Frank (Nick Offerman).  He brings along his best friend Patrick (Gabriel Basso) whose parents are driving him insane.  A strange kid called Biaggio (Moises Arias) with a machete tags along.  This is a tale of the kids, their family, their interactions as well as lessons learned.

Example, when Kelly appears at Joe’s door, his immediate response is “I don’t do cookies!” or when Joe falls out the house window.  The humour is amusing at most but hardly laugh-out loud funny.  The result is either, enjoyment of the humour all the way throughout the film or pure irritation when everyone around you laughs except for yourself.

The other flaw is the film’s credibility.  It is unlikely that three kids could build such a functional house in the woods.  Another factor is where they obtained all the proper building materials and haul it all to the woods.

Performances are top-notch, given the relative experience of the newcomers.  The three kids are nothing short of excellent.  But it is Moises Arias as the strange Italian kid Biaggio who steals the show.  Every scene he is in, he is a welcome surprise, whether it be delivering a serious line or goofing it up, dancing on the pipe in the woods.

Another problem is the film’s predictable ending.  It is clear and no surprise half way through the film how it will end.  The lack of a good punch in the climax makes a let-down given the upbeat nature of the film throughout.

The William Shakespeare play MUCH ADO ABOUT NOTHING has been made into films countless of times, the latest being this one in 2012 and the last one in 1993 directed by Kenneth Branagh with an all star cast including himself, Emma Thompson and Denzel Washington.

The 2012 one by Joss Whedon is a modern adaptation, which means it is set in the present with all the modern technologies like camera, phones fast cars and airplanes.  But the characters still speak in the Bard’s prose though one wonders the director’s decision to shoot the film in black and white.  The film is aided with a rich soundtrack by family member Jed, the highlight being an original song sung by an Asian by the piano as a trapeze act is performed by two beauties on a swing at a party.

The actors are all apt and absolutely good-looking, right out of fairy tale territory.  It takes a while to get into the language of Shakespeare, but if English is your mother tongue, it only takes 15 minutes or so before your ears become fluent with the rhythm and rhyme of the olde English.

But the story though universal and the Bard’s words immortal, the story of MUCH ADO ABOUT NOTHING is already all too familiar.  Whedon’s film contains no new insight or surprises, no matter how well made it is.  The film would thus not disappoint.  It is more than pleasant, entertaining and fun but unfortunately still mired in all too familiar territory. 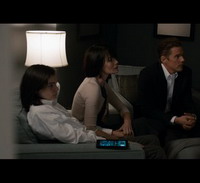 The film THE PURGE is set in the year 2022 when the United States has been taken over by a series of multinational corporations known only as the "New Founding Fathers of America", who in order to keep the population under control, have instituted an annual 12 hour period, commencing from 7pm on March 21st to 7am on the morning of March 22nd.  During this period all criminal activity, including murder, becomes legal. This annual event is known as "The Purge".  The only rules during the purge are that "Level 10 ranking Government Officials" must remain untouched and usage of "Class 4" weaponry and above is forbidden. During this emergency services are suspended and all external calls are unanswered.  The Purge is designed to serve as a catharsis for American citizens, giving them a chance to vent all negative emotions however they desire and express dark impulses. The result is a prosperous America with employment rates as low as 1% and a huge decrease in crime.

There is an inherent problem with films containing preposterous premises like THE PURGE and similar ones like THE ASTRONAUT FARMER in which the audience has to believe that a farmer is capable of building a rocket from scratch and using his brains in his backyard or WARM BODIES in which zombies can turn back to human beings.  The director has to spend an enormous effort trying to convince the audience of the film’s credibility.  And often and not when this does not work, the film falls completely apart, no matter how well made.

But for THE PURGE, considering that the United States grants its citizens the right to bear arms with the result of idiot citizens blasting their weapons and killing people in schools, the premise might be quite believable.  Still, during the promo screening of THE PURGE, there are lots of scatters wolf wild laughter amidst the serious scenes.

James Sandin (Ethan Hawke, surprisingly well groomed for a change) is a wealthy home security developer living in a picturesque neighbourhood, who has made a fortune exploiting fears of the annual purge, by flogging security systems that turn homes into impenetrable fortresses.  At home, Mary Sandin (Lena Headley) struggles with her two children: teenager Zoey is dating a considerably older boy named Henry (Tony Oller) who her parents do not approve of, and Charlie (Max Burkholdr), who has autism and has been home schooled by Mary and has little knowledge of the outside world is obsessed with the moral justifications of the purge, much to the concern of the rest of the family.  When the purge begins, Charlie lets a stranger into the house and the violence begins.

The film has not much story and the basically horror flick with the futuristic premise grows boring really soon despite its 90 minute running length.  The story is totally predictable from start to end, if not laughable.  Hawke, Headley and cast try their damndest hard to save the film but to no avail.

For a film that must the filmmakers be thinking when making this movie?

(This film opens Wednesday with a Tuesday night evening screening)

THIS IS THE END concerning the end of the world, Bible Apocalypse style in which God’s chosen ones are drawn up to heaven according to the Book of Revelations is not the kind of film Christians would condone despite its general accuracy.  The film has tons of swearing, drug abuse, foul language and wild partying.  But it is also one of the most hilarious films of the year, one filled with surprises at every corner.

The film begins at the L.A. airport, where Jay Burachel arrives to meet buddy Seth Rogen.  After smoking up for a few hours they decide to attend a big party thrown by James Franco also attended by Jonah Hill, Craig Robinson, Emma Watson and lots of other celebrities.  (The stars play themselves in the movie.)  After Jay and Seth decide to go to the corner grocery store to buy cigarettes, all hell (literally) breaks lose with people beamed up into the sky while an earthquake swallows up the city.  The two barely escape back to Franco’s place, where nothing has happened inside except the continuing party.  Then the house shakes up.

No one knows what is happening so the less the audience knows about he plot or story, the more entertaining the film will be.  I knew nothing of the story prior to the screening, nether had I seen the trailer.  So, as more of the story is revealed, the film grows more and more intriguing.

The special effects are top notch from the car crashes, earthquakes and the gigantic monsters.  The one that shows up with a huge dick to possess Jonah Hill is an inspiration in crudeness.  Surprisingly, the film also contains a few genuinely scary scenes.

The actors are all game for almost anything.  Take Michael Cera and Channing Tatum for example.  They play off each other characters very well and with much hilarity.  Channing Tatum’s cameo at the end is so off beat that it has to be seen to be believed.  The Back Street Boys also lend their touch in a grand musical number.  Who could tell that the end of the world could be so much fun?

Best Film Opening: THIS IS THE END

Best Film Playing: THIS IS THE END