THE WOLVERINE also makes its debut.

This is one of he oddest films of the year.  Shot in black and white 80’s style with the period atmosphere (clothes, hair, speech and even the computers) so convincing that one can swear that the film is from those times.  Looking like a documentary, it would surprise many that what transpires on screen are all made up.

Set over the course of a weekend tournament for chess software programmers thirty-some years ago, Computer Chess transports viewers to a nostalgic moment when the contest between technology and the human spirit seemed a little more up for grabs. On display here are the eccentric geniuses possessed of the vision to teach a metal box to defeat man, literally, at his own game, laying the groundwork for artificial intelligence as we know it and will come to know it in the future.

Director Bujalski’s characters are all eccentric in their own way.  The tournament organizer himself is a nerd, filled with his own pride and also proud of what he thinks is the best competition ever organized.  He gets o f*** p n the last of the tournament.  The weirdest one is a cheap bloke who has no money to rent a hotel room.  The only decent person is also a nerd, who is given the runaround by his equally nerdy boss.  Also sharing the hotel is a group of new age meditators who are in search of peace and love.  The groups clash in the film with hilarious results.

But the novelty of nerds on display in an 80’s setting can also get tiresome after a while, no matter how well the mood is created.  After half the film is through, the jokes grow less funny and the characters more annoying.  One also wonders what the point (or message) is in all this that director Bujalski is trying to show us.

Chilean director next outing after his touted Best Foreign Film Oscar Nominee THE MAID, the film sees, once again an outsider (this time the American tourist Michael Cera) in an unfamiliar familial setting (Chilean 3 brothers and a Chilean free spirit).  The task again is to adjust and to come to agreeable terms with the unlikely circumstances.  Though not as satisfying as THE MAID, Silva’s new film is subtly funnier and has a winning performance from a major non-Chilean star (Cera).

The full title of the movie is CRSTAL FAIRY AND HE MAGIC CACTUS AND 2012.  The 2012 of the title refers to the possible end of the world in the Mayan calendar.

Cera stars as Jamie, a saggy, boorish and over-excited American tourist searching for a great hallucinogen experience hat he believes can be obtained by cooking the San Pedro, a breed of cactus.  Travelling wit three Chilean brothers, who speak Spanish most of the time, he meets a hippie at a party who he calls Crystal Fairy (Gaby Hoffman) whom he invites on their trip to the north.  Needless o say, they do not get along mainly because their cultures and beliefs are so different.  Worst still, she often parades around total nude, to the great discomfort of Jamie

Their travels include hunting down the San Pedro, procuring it and ten cooking it.  Director Silva allows his actors a free hand during most of the film, while controlling the main sprit of the story.  Both Cera and Hoffman are excellent and they make the movie.

The film is full of surprises though the film heads towards a predictable ending.  But the characters are hilarious, mostly because Silva allows the audience to see the imperfections of people.  The film’s funniest moment arrives when Crystal Fairy, who initially condemns processed food, takes a handful of fruit loops and gulps coco-cola early in the morning.

The film also serves to display the beautiful scenery or Chile that most Americans are unfamiliar with.  The sandy while beaches and rough waves are beautiful rugged sights away from the crows of tourists.  And the Chileans on display in the film are largely friendly and helpful.  Everyone seems happy except the American.

Whatever the message Silva intended in the film is still unsure, but his faith in human beings shows off in films like THE MAID and this one.  Which has a major impact on the characters as well as the audience in each film.

In short, FRUITVALE STATION is a reenactment of the fatal shooting of an innocent 22-year old African American, Oscar Grant (Michael B. Jordan) by a BART police officer for no reason at all.  This is the classic case of being at the wrong place at the wrong time.  Even the young man’s mother, Wanda (Octavia Spencer) blames herself for persuading her son for taking the train when he wanted to drive on New Year’s Eve.

With hardly any material, the first half of the film is a real bore.  It feels as if director (who also wrote the script) is out of ideas with fillers put in.  The man is shown to be imperfect (who is perfect these days?) being caught by his girlfriend (Melonie Diaz) cheating with another bitch.  A lot of family scenes are displayed on screen, obviously to evoke the audience’ sympathy even more, when the mishap occurs.  What’s on display at least appears to be what African American like these people live and go through, though it may be argued that there is nothing here that audiences have not seen before.  Or is this any masterpiece filmmaking.

But when the fight starts aboard a train leading to huge cops taking control with that trundgeons, the film takes a dramatic turn.  The altercation between the cops (played by Kevin Durand and Chad Michael Murray) and the African Americans are executed with authenticity, brutality and conviction so that what transpires on screen comes to pass as acceptable truth.  One feels for the poor innocents being beaten up while also understanding how events can escalate to such a catastrophe.

But once again, once the man is hospitalized and the mother visits, it feels like filler time again.

Still, because of its volatile content, the film won the Grand Jury and Audience award when screened at Sundance. 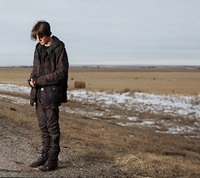 RUFUS is another teen vampire romance film, which no doubt the filmmakers wish would cash in on the success of the TWILIGHT films, BYZANTIUM and WARM BODIES.

When the film opens, Rufus (Rory J. Saper) is advised by an elderly lady who could be his grandmother to try to blend in the new town he is headed.   Truck hits and annihilates her.  Rufus is taken in by a cop, Hugh Wade (David James Elliot) and his wife, Jennifer (Kelly Rowan) who look after Rufus.  Rufus befriends the neighbor girl, Tracy (Merritt Patterson) who discovers he is not normal.

The film has a cool Canadian slant.  The characters are polite, always saying please, and taking risks (like the vet) risking losing his license to help others.  The atmosphere is authentic countryside Canada with vast and bare open spaces.  There is one scene featuring a deli shack featuring Shultz’s meats.  One wonders if the director really owns one and advertising his wares.  The cinematography has won Craig Wrobleski several awards.

The script takes on too much that it can chew including a subplot involving a gay teen, Clay (Robert Harmon) who has the ’hots’ for Rufus and the couple’s dead son who Rufus is apparently filling in the shoes for.

But the film, despite its flaws moves on at a good pace with the interest of the audience on track.  The result is a fair film that at times tries to hard but is nevertheless intriguing enough.

It is really rare that two films from Chile (a rarity for a single film itself) open this week in Toronto and rarer still that both involve travel to the sea in the north of Chile.

For this film THURSDAY TO SUNDAY,  two children go on a vacation via car with their parents to the north of Chile.  It all begins on Thursday and ends on a Sunday. Lucía (Santi Ahumada) (10) and Manuel (7) travel for the long weekend with their parents, Ana and Fernando.  The couple has decided to break up but has previously promised their children to go to the north, so they decide to travel anyway.  The journey slowly turns into a final goodbye but a long route.  The landscape's loneliness and the car's confinement begin to surface the troubles of the couple. The children just want to get to the beach; Fernando, to a piece of land his father has left him; and Ana, to a non-existent place where things are fine again.  This film is Lucía's distant and fragmented outlook on this last family trip.  The film moves at a very slow pace but patience is needed to get the feel of what is happening among the family members.

The film is occasionally, very artfully shot, if one is into this kind of thing.  For example, there is one scene at the film’s start when an event can be observed through the reflection of a glass wall.  But the film is a slow journey just like the one Lucia experiences, and one hat can be a bit frustrating as well.

THE TO DO LIST is an uninspired female teen comedy that leads the protagonist Brandy Klark (Aubrey Plaza) to tick off all the items of her list like blow job, French Kissing, finger *ucking in order to lose her virginity before entering college.  This is not the first teen comedy dealing with the topic of losing ones virginity though having the story redone in a female setting is a welcome change.

Straight A student and valedictorian high school graduate Brandy gives her speech but is booed off the stage for being a virgin.  Her two friends, Wendy and Fiona who have an obsession to watch Bette Midler's BEACHES help Judy in her quest.  Nerdy Cameron (Johnny Simmons) is in love with Judy but Judy has the hits for hunk Rusty Waters (Scott Parker).  Judy gets a job at the local pool run by Willy (Ben Heder) where Waters also works.  Judy gets item after tem ticked off and finally gets her act together in this somewhat variation of a coming-of-age losing virginity comedy.

The list of items on the list provide ample opportunity for comedic set-ups  In fact that translates to one set-up per item.  Unfortunately, director Carey misses many chances of laugh -out loud laughs.  The dialogue could have been funnier and the timing comedic timing more precise.

As for vulgarity, diector is not ashamed of letting everything lose.  The lewd lyrics of the opening song prepares the audience for what to expect.

Aubrey Plaza as the main lead does a satisfactory job as do most of the other actors playing general goof balls.  One can never *uck up playing  goofy?

The film leans towards sending the rather cool message of how important sex is to a teen.  Not that any above the age of 21 really cares anymore.  Most of the film’s antics come across more as annoying than anything else.  The climax of the film is how Brandy loses her virginity.  This does not mean much.  However, to the select target audience, this film might hit the perfect G-spot.  But thank God, I have passed this passage in life and I do not miss it at all.  Nor do I need to be reminded of it in a generally unfunny movie.

Best Film Playing: This is the End