Quite a few big films opening this week.  The biggest is ELYSIUM followed by Disney’s PLANES, WE’RE THE MILLERS and the new PERCY JACKSON movie.  But other are other smaller gems such as INFORMANT and IN A WORLD making their debut.

If you are in Toronto, TIFF Cinematheque begins its series on the films of Leos Carax entitled Modern Love.

Based on the true story of a sole survivor of a fishing boat wreck, THE DEEP is a mesmerizing, offbeat drama that plays to its roots that it is a true event.

The actor portraying Iceland hero is an unlikely choice, Ólafur Darri Ólafsson is overweight, hairy, sloppy.  But when the end credits reveal what the true survivor, Gulli looks like, there is an uncanny resemblance. One would expect a fit, bulked seaman to survive swimming the extreme cold waters, not a fat man.  But when tests are carried out between Gulli and the local marines, it is Gulli that comes up on top.

The film is split into three parts.  The first establishes the characters in the story.  There is Gulli, the new cook, his friend, his wife and children and a few other mates.  They take to the local bar, get drunk and fight.  Though it seems unconnected to the story, the first half of the film creates an excellent feel of Iceland, the fishermen, the cold conditions and comraderie.  In fact, without the atmosphere, the film will fall flat.

The second portion is the one at sea, the capsizing and Gulli’s swim to the rocky coast and 2 hour hike to safety.  It is believably shot, and very well shot at that, showing the brutal terror of nature.

The third is Gulli’s adaptation back to normal life and the village’s acceptance of him.  Though there is no exciting climax, the drama more than makes up for it.  Kormakur also injects quite a bit of humour that results in a few laugh-out loud moments.

THE DEEP directed by Kormakur who directed both CONTRABAND and 2 GUNS is undoubtedly his best and most meticulously made film.  It is a gripping exciting drama from start to finish and a very human one at that.  THE DEEP was Iceland’s entry to last year’s Best Foreign Film Oscar.

Directed by Johnny To

Johnny To’s (ELECTION and SPARROW) latest crime flick is another edge of the seat thriller about the drug war between the cops and a drug gang.

The film begins with drug lord Tmmy Choi (Louis Koo) arrested. He has a wide influence that includes the ownership of meth labs that have exploded causing deaths of his wife and brothers.  He is offered a reprieve of the death penalty if he cooperates with Captain Sun (Louis Koo) which he does.  But it is never certain where his loyalty ultimately lies – right to the end with the violent shoot out.

To’s film, being made and shot in mainland China has a slightly different look from his other Hong Kong crime action films.  For one, the film has more sights and the action takes place in more open spaces that confined sets.  The setting including the climax is both Hong Kong and China where the drug war takes place.

The climatic shoot out is exciting enough with a high body count and cars crashing into other vehicles and human beings.  One problem is that it is not always easy to distinguish the good from the bad guys.  It does not help that the plot keeps Choi’s loyalty a secret with him shooting at both parties.  Do not expect any character development or strong narrative, though the script is solid.  The strong action scenes (continuity especially the chases are excellent) more than make up for other flaws.

INFORMANT tells the intriguing story of one man, Brandon Darby – an alpha male, as described by an acquaintance.  The reason he is the subject of a full documentary, whether he is worth or not is arguable, is that this person did so much good as a radical activist aiding the Hurricane Katrina victims that it became so weird that he finally became an FBI informant.  In U.S. terms, that means he became a rat in the human race.

The film begins with interviews by both the subject himself followed by those who now or who have worked with him.  Director Meltzer then uses old footage to show the ma doing work with the relief workers in the lands devastated by Katrina.  In the process, he attempts to show Brandon’s character and his ideals as they are formed.  All this, no doubt without incurring the wrath of already an inborn angry alpha male.  But the trouble is that his motives, which is what the film aims to reveal are never uncovered at the end of the film.  The mystery teased to the audience still remains a mystery.  There are only clues such as his childhood that includes running away from home at 13 is talked about by the subject himself.

But a documentary is often as interesting as its subject.  Odd or weird that Brandon is, it is also clear that the world is full of such people.  Why Brandon is chosen just because he became an informant is questionable.  The subject matter and the man loses the audience’s interest quickly as the documentary progresses.  Halfway through the move, one would hardly care anymore about this egomaniac person, who cannot take orders and who is full of himself.

Already opened and played a few weeks in the U.S., KEVIN HART: LET ME EXPLAIN has already grossed Lions Gate Entertainment over $30 million based on a $3 million production cost.  It is easy to see why.  The standup comic has an infectious personality.  Hart will make you laugh as you would never before, looking at everyday routines from the hilarious Hart point of view.

The film opens with Hart’s throwing of his own Mingle and Mix party in which he has paid for all the drinks.  But he is given the slack by people he does not know.  For example, he is accused of not sleeping with dark skin bitches no more.  Angry, Hart decides to explain it all at Madison Square Garden.

But running at just over an hour and 10 minutes, the film runs out of material.  Quite a few fillers have already been added, such as Hart’s tours around the world.  But these segments hardly make any sense in the move except to prove that Hart has been around the world.

Hart’s comedy is geared towards the young adult.  He pokes the most fun on male/female relationships, his best material being his imitation of a crazy lady accusing the boyfriend of cheating.  Whether the jokes make sense or not, Hart is still funny doing his best, contorting his face, body and voice.  Vulgarity takes the form of the ‘f’ word and bitches word, with the material occasionally turning too off coloured (dick sucking jokes).  Director Small is smart enough to have the camera focus ever so often on the hysterical audience.

The climax of the film is Hart’s live performance at Madison Square Garden. It is nothing short of miraculous to watch this short man wow such a large crowd.  When Hart goes teary eyed at the end of the show, one can clearly understand why.

Besides being one of the few opportunities to see Kevin Hart perform, the film is a welcome change, a mix of documentary and fiction.  Hart will have you laughing out loud from the aisles.

Of the 10,000 that have ventured the illegal voyage from Africa to Europe on rickety boats, more than 5,000 have drowned.  The film LA PIROGUE, an official selection at Un Certain Regard at Cannes 2012 serves as a dedication to those who have perished, as the end titles say. Pirogue is a type of fishing boat and the one used for transport of Africans in the film.  The trip here is from Senegal to Spain with 29 men guided by Captain Baye Laye (Souleymane Seye Ndiaye).

Director Moussa Toure’s powerful voyage drama is divided into several parts – the preparation for the journey and the introduction of key characters, the journey itself and the well-shot climatic storm followed by the conclusion on Spanish shores.  It is safe, formulaic filmmaking though not primarily commercial box-office material but still an eye-opening entertainment piece.  The story offers ample opportunities for drama that Toure utilizes to the maximum.  These include the tension between the different tribes on the boat; the rough seas and storm; the encounter of a stranded boat with similar refugees but desperate to the point of death; scanty rations to be divided among everyone; a stowaway and a passenger that goes crazy.  There hardly needs the additional story of a stepfather and son sorting out their relationship that is introduced at the start of the film.  This subplot is brought up only once or twice and after the audience had already forgotten about them.  Music is sparse with the film relying on sounds to create dramatic effect.

There have been other films telling tales of immigrants making harsh journeys to promised lands.  In YOL, a Turk and his woman brave the bitter ice and wintry winds and other films like INCANDESTINE also portrayed ship voyages.  But LA PIROGUE is a faithfully told tale and if you ask me, there is hardly anything I could think that need be added to the film for more dramatic effect. 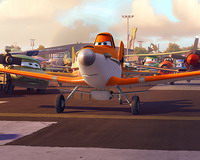 Right on the heels of CARS, Disney’s PLANES with a goofy hero dreaming it big is a varied re-tread of the former, though the former was not that great an animated feature despite its huge box-office success.

Dusty (Dane Cook) is a one propeller cropduster who wishes he was an ace flyer similar to TURBO in which a slug dreams of speed.  Dusty enters an around the world race, (held for no real reason) and of course comes up a hero (after saving British flyer bulldog (John Cleese) and maybe number uno in the process.  Don’t want to have to include a spoiler alert here but one can guess the film’s outcome anyway.  Dusty is trained by veteran Skipper (gruffly voiced by Stacy Keach) and serviced, mechanically that is by best friend, Dottie (Teri Hatcher).

The long race diminishes the effect of a good climax.  The villain is also not evil or goofy enough.  The film looks good, however, especially in 3D but there is more in a film than looking good. Hill’s film is neither exciting, funny or imaginative enough compared not only to recent Disney fare (MONSTERS UNIVERSITY) or others (TURBO, DESPIABLE ME 2).  The lines like: ”It does not how fast you fly but how you fly fast”, appear weak and pathetic.

Lets hope that TRAINS will not be the next Disney outing after PLANES (following the John Candy comedy PLANES, TRAINS AND AUTOMOBILES).  PLANES is unimaginative, boring after the first 10 minutes (I wanted it tot end right then) and should be avoided.  But the film will make money from the tied-in toys and merchandizing and there should be enough kids who dream of becoming a pilot to make this sorry Disney film a tidy profit.

BEST BETS FOR THE WEEK:

Best Comedy: This is the End