No super blockbusters opening this week, but there are a fair number of films that bare worth a look.  KICK-ASS 2, JOBS and THE BUTLER (a sure-hit because of its wide target audience) make their debut.

African American themes are found in the films THE BUTLER and CALL ME KUCHU. 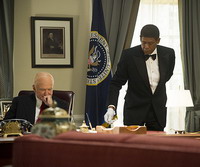 What is it with the Lee Daniels’ film with odd titles like PRECIOUS BASED ON THE NOVEL BY (bah..blah..blah) and this one also called LEE DANIELS’ THE BUTLER?

THE BUTLER based on the book of the same name and written by Danny Strong is best described as an epic biography of one so-called butler Cecil Gaines (another Oscar performance by already Oscar winner Forest Whitaker) who has served 6 U.S. Presidents from Eisenhower.  The film starts from Cecil’s humbler beginning as a boy on a cotton plantation.  Witnessing the killing of his father by a white man after the white man raped his mother (not shown on screen), Cecil is forced to leave the plantation after being taught to be a ‘house nigger’ by Miss Annabeth (Vanessa Redgrave).  Cecil’s self control and careful retorts eventually lead him to be employed as one of the prestigious staff of the White House.  He serves as an efficient butler, supporting his family, wife Gloria (Oprah herself) and two sons Louis and Charlie.  Louis (Owelowo) joins in black activist

Daniels film is incident driven.  Daniels shoots each scene emphasizing emotion and drama.  But the problem is that the film is just made up of these strings of incidents so that after a while, the poor pacing leads the audience to feel the monotony.  Though the incidents are interesting enough, there is a feeling of a lack of purpose in the narrative.  So much so, that in the film’s best and most dramatic segment – the family dinner scene with the confrontation between father and Louis, the effect is tremendous, thanks to the break in the monotony.

Daniels shows both sides of the coin in the fight of black civil rights.  He is for the rights of blacks voting and served equally in public places.  But he is against the violence of the Black Panthers.  The father/son relationship appears a major part of the story as Cecil’s service as a butler.  Daniels himself suffered father abuse as a kid for his sexual orientation.  But Daniels seems unable to convince what his main theme is really on.

THE BUTLER passes as a bio-pic but it lacks the punch of Daniels’ earlier films like MONSTER BALL and PRECIOUS.

Uganda says no to homosexuality!  Homosexuality is illegal in Uganda.  95% of the population do not support it.  If caught in the act, life imprisonment will be the result.  Just as these harsh lines are narrated to the audience at the beginning of this documentary, the camera focuses on a gay couple’s 9th Anniversary in Uganda.

The focus is the new bill (as if it can not get worse) that threatens to make homosexuality punishable by death.  The film follows David Kato – Uganda’s first openly gay man – and his fellow activists work against the clock to defeat the legislation while combating vicious persecution in their daily lives. But no one, not even the filmmakers, is prepared for the brutal murder that shakes the movement to its core and sends shock waves around the world.  This occurs just past the half way mark of the film and is enough to jolt the audience out of their seats, especially after the directors have invested so much time into this man in terms of screen time.

The film also captures vividly the harsh environment suffered by the LGBT group and their desperation to gain acceptance.  The audience sees the same stubbornness faced here as in the U.S. decades ago, and again it is the Christian fundamentalists that preach evil than anything else.  The climax of the film is whether the bill is passed or not, whether David Kato died in vain.

This film has a special screening engagement at the Bloor Doc Cinema from the 16thto the 20th of August.

A hijack drama Norwegian style, which means a freighter ransomed by Somali pirates and not an aircraft by terrorists.  Not many films have been made on this particular subject, so it is a welcome change of drama, suspense, information and education.

The film starts with the life of the ship’s cook, so that the audience can identify and be sympathetic to the kidnapped.  His employer, Peter who works in a no-nonsense corporate environment is a very cold, efficient bargainer, especially when coming down to business acquisitions as demonstrated by a Japanese takeover.  But negotiations are different with the pirates as lives are as stake.  The director moves his film at a tight and suspenseful pace which keeps the audience riveted and curious of the outcome throughout the film.

The negotiation between Peter and the pirates and the trauma suffered by the hostages are both vividly captured by Lindholm.

But rare as this subject as in film, last year saw a riveting documentary entitled STOLEN SEAS that dealt with Somalian hijacking along the African coast.  Though both films cover the topic of hijacking and negotiating the release and payment of a ransom, STOLEN SEAS provide more insight on Somali piracy.  One argument is the lack of a central government, the other the theft of their fishing seas and poverty that surrounds them as the wealth of ships passes them by daily on their shores.  Many Somalis believe that it is their right to plight and plunder.  But it is difficult for audiences, especially those in North Americans to condone these activities, nevertheless.

A HIJACKING is a film as efficiently executed (though not always with happy, satisfying outcomes) as the hijacking negotiation process.

JOBS is a biography of Steve Jobs, best known as the founder of Apple who sadly had passed away from a brain tumor last year.  This selected biography shows the years he started out as an entrepreneur up to the time when he was brought back to Apple as CEO in 2000.   His success in the other fields in Pixar, at Disney and as an innovator for the iPhone, iPod, etc. are not included in this film.  Neither is his illness dealt with or mentioned in the film

First thing is that despite all the negative news of Ashton Kutcher playing Steve Jobs, Kutcher does a pretty good job with both his Jobs’ mannerisms and acting.  The script by Matt Whiteley requires the audience to be on Jobs’ side and for the most part, Kutcher has his audience reeling for him.  The supporting cast that includes J.K. Simmons, Kevin Dunn, Matthew Modine and Dermot Mulroney all do impressive work.

The film begins with a shot of Jobs, hippie like lazing around campus in 1974.  He drops out and with the aid of his best friend, Steve Wozniak (Josh Gad) gets into the computer hobby business.  His grand scale of dreams leads him to assemble a team to form a company to produce electronics thanks to the finance of Mike Markkula (Dermot Mulroney).  The film gets pretty detailed, even technically wise (there is a part talking about the substitution of a 16-bit Motorola microprocessor for the 8-bit 6805) that should not disappoint the part of the audience in the know of such stuff.  The 70’s atmosphere is also effectively created, music and all.

But it is the business sense of Jobs that gets his company in trouble and the film going.  Like the recent THE SOCIAL NETWORK, this film concentrates on the business part of the company and how Jobs infuriates the shareholders.  This makes for high drama, which this film needs to create interest.  The audience is not really interested in the love or sex life of Jobs or how the mac was developed in detail.

So as a film on the story of Steve Jobs' ascension from college dropout into one of the most revered creative entrepreneurs of the 20th century, all the dramatic business associations were highlighted with his vision on creating a practical computer for the ever person realized.

When KICK ASS opened a few years ago, it blew me away making it to my best 10 list of the year.  While its sequel does not match up to the first, it still earns a 4-star rating.  The film retains the spirit of action heroes, the energy of youth while not forgetting the problems youth faces at the same time.

KICK ASS (Aaron Taylor-Johnson) has retired from donning his mask and action hero costume.  But he still trains with Mindy (Chloe Grace Moretz) also known as Hit Girl.  Hit Girl is finally forced to give up crime fighting and keep her promise to her father (played by Nicholas Cage in the first movie) before he died.  But super villain wannabe Mother-F**ker (Christopher Mintz-Plasse) emerges, assembling his gang of baddies.  Kick Ass assembles too his troupe of super heroes resulting in a big showdown fight which forms the climax of the film.

There are actually three stories (all just as interesting) in the script.  The first involves Kick Ass, David and his father (Garrett M. Brown) (similar to SPIDERMAN), the other Chloe and her guardian, Detective Marcus Williams (Morris Chestnut) and adapting to high-school (playing like MEAN GIRLS) and the third with the villain trying to be as bad as he can be despite counter advice from his late parents’ butler (John Leguizamo).  The film, besides being a kick-ass action film also features real teen problems, though looking at it at a humorous standpoint.

Jim Carrey has a role as the commando outfitted guy, Colonel Stars and Stripes and ex-mobster born again Christian who forms and trains the vigilante group.  Carrey refused to promote the film citing the film’s violence as the reason.  Of course this resulted in his co-stars rebuttal that promoted the film even more.  To his defence, KICK-Ass 2 is very, very violent with hands chopped off, stabbings, baseball bat bashing heads and mouths with lots and lots of red.  This of course, excites the audience more.  The fight scenes are also brutal especially the one involving Hit Girl and Mother Russia (Olga Kurkulina).  There is one adrenaline flowing action sequence played with the tune of “When the Saints…”

Director Wadlow paces his film extremely well.  When Hit Girl finally dons her costume again after a spell, the action sequence of her fighting the baddies in a van on the highway is the best and obviously saved up for the last.

KICK-ASS 2 sure kicks ass, there is no doubt about it.  It is action packed, hilarious and full of spirit and energy.  This series demands another sequel.