Big movie of the week is the teen vamp romance actioner THE MORTAL INSTRUMENTS: CITY OF BONES which is not that bad a film for one in that genre. 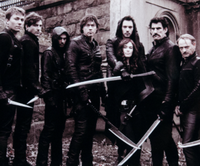 Riding on the heels of the success of the TWILIGHT films, WARM BODIES and other teen vampire romance action films, THE IMMORTAL INSTRUMENTS: CITY OF BONES, based on the first novel of the Mortal Instruments series (new York Times Best Seller list) by Cassandra Clare will quite understandably be another box-office hit.  Besides its theme, the film has a lot going for it that will attract the target young audience.  For one, all the young stars are almost body perfect from Clary Fray’s (Lily Collins) two brooding lovers, (a blonde and one dark haired) to the villain, Valentine (Jonathan Rhys Myers).  The story is a good one with the director playing with a strong narrative.  The film is event driven with excellent pacing (it hardly feels like its long 130 minute running time) and a good built up climax with audience anticipation laced throughout the story (the unexplained symbol at the end; the teasing of who of the two ‘hotties’ will eventually settle with Clary and why the line” Your mother was trying to hide from the shadowhunters,” was uttered.

It al starts when Clary witnesses a killing at the club with Simon (Robert Sheehan).  Simon sees nothing and Clary discovers that her mother (Lena Headey) had been hiding the fact that she is a shadowhunter and that the gift is in Clary’s blood.  Clary discovers that everyone is looking for the immortal cup that can tip the balance between good and evil.  She falls in love with Jace (Jamie Campbell Bower), a shadowhunter who saves her.

For a teen movie, there are corny parts but there are other equally good lies such as the logic of love being able to destroy.  The story of the trained falcon is also a good a tale that needs repeating.

For a dark vampire film, the film contains sufficient scary images.  The one with a portal to the other side of the mind’s imagination is a good brainteaser.  When Clary eventually enters, she sees a little girl in a yellow frock dancing to a nursery rhyme – which is really creepy.  What happens after is enough to make one jump out of ones seat.  The advice that Clary keeps hearing: “You can’t trust anyone”, is also quite a scary line.

Though set in the States, the film was shot in Toronto and there are familiar Toronto sights, like the typical downtown housing neighbourhood.

But what is it with the British accents?  Bower is British, Sheehan is Irish.  But why is the thug played by Canadian Kevin Durand (last seen in FRUITVALE STATION) also sporting a British accent?

But what makes the film work is the film has a very good story.  It is the classic battle of good and against evil, set with strong family values with a good strong romance built in that does not distract from the main plot.  (Better than the TWILIGHT films.)  The subplots are just as intriguing especially the one with Alex having a gay fixation on Jayce.  Watching Clary fall in love, it is good to reminisce about falling in love again.

Heard that a sequel is already in the making!

Action Kung-Fu flicks have been given a turn by Asian directors like Zhang Yimou and now Wong, both best known for their films with lush cinematography.  Yimou gave audiences HERO, which was no doubt gorgeous to behold but the film felt more like opera than an action film.  Fortunately, Wong’s (IN THE MOOD FOR LOVE, CHUNGKING EXPRESS) THE GRANDMASTER contains exciting fight sequences but the uncomfortable mix of action and art is still present.

For one Wong executes many of the action sequences in slow motion so that audiences can appreciate the technique of the fights like the fighters’ footings and limb movements.  But the excitement is all gone.  Master of Suspense Alfred Hitchcock never used slow motion at all as he always believed in the shock effect.

The story involves Kung-Fu Master, IP man (Tony Leung), the great southern hope.  He is to win the big fight that would save the honor of the south.  The main illain ma San has murdered his Master whose daughter, Gong Er (ZiYy Zhang swears revenge).  As IP Man’s life story unfolds on screen, the political unheavals also come into play as the Japanese invade the northeast.

But THE GRANDMASTASTER is supposed to be a Kung-Fu film with a little romance, so it fails.   The story is also all over the place with newly introduced characters such as The Razor (Chen Chang) that lead nowhere.  The origins of the villain, Ma San (Jin Zhang) are also left a mystery.  Besides the uncomfortable flashbacks (season jumps from Spring to winter as the story is so harsh, there is no summer), the story fails to engage just as the romance between the two leads never fully develops.

The film is promoted as the story of the man who trained Bruce Lee.  Whether he did, there is no mention of this in the film.  THE GRANDMASTER is reported to be have taken 7 years in the making, and it obviously got muddled up quite the few times on the way.

Total artsy Canadian film that mixes different genres like horror, sci-fi and experimental.  This is the kind of film Canada loves to come up with that nobody wishes to see.  And the reason is that the film makes no sense and is a total bore.  Unless one loves to indulge in pure cinema and enjoy an over intensified annoying musical score.

A young woman, Lena (Claudia Dey) retreats to a lonely cabin in the woods in order to wrestle with her demons and the debilitating ailment (affecting her spine) that plagues her, in this riveting, atmospheric and gorgeously photographed portrait of isolation by Toronto filmmakers Calvin Thomas and Yonah Lewis.

What transpires is up to ones interpretation if one can decipher the images.  Enough said.  Avoid unless what is written sounds like your cup of tea.  Film runs too long at less than 80 minutes. 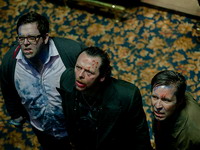 THE WORLD’S END is the much anticipated end of the world comedy from director Wright and actor Simon Pegg that both shot to fame after their highly successful SHAUN OF THE DEAD about a group of British boozers surviving a zombie invasion by hiding in a couple of pubs.  THE WORLD’S END treads familiar territory with a group of 5 friends doing a pub crawl in their hometown of Newton Hampton only to discover that the inhabitants are no longer human beings, STEPFORD WIVES style.  But the aliens fight back with arms out stretched zombie style, so what Pegg and friends deal with are pretty much of the same.

In 1993, Gary King and four friends embark on the Golden Mile pub crawl but are unable to complete it.  Now, Gary (Pegg) assembles, for whatever reason the motley crew to complete the drunken fest that ends at the last pub called THE WORLD’S END.  Trouble is that they find their friends are acting very weird.  In fact the town are no longer inhabited by human beings but by aliens and their robots.  This they discover during  drunken brawl in a pub toilet.

The film works well as a buddy, buddy drunken movie, humorous, logical and a little touching.  Once the alien factor comes in, the film deteriorates into a Hollywood style big and louder is better mess.  Nothing makes much sense, less the climatic ending with an argument between the human Gary and the Monster Alien.  The scene is laughable for the wrong reasons.

In the flashback 1993 scene, the boys sit on the hill after the unfinished pub crawl watching the sun rise.  But in 1993, all British pubs have last orders at 11 pm.  It is only in the November of 2005 that pubs are allowed to close later, but only if they applied for a private license with the result of most pubs still closing a 11 pm.  So the merry-makers drinking into the many hours of darkness looks inaccurate.

The film has cameos from the likes of Pierce Brosnan and Billy Nighy.  But it is good to watch the little seen Eddie Marson (the driving instructor in Mike Leigh’s HAPP-GO-LUCKY) do his thing with a bigger role as a supporting character playing of one Gary’s cronies.

THE WORLD’S END can nowhere be compared to the other end of the world comedy, Seth Rogen’s THIS IS THE END.  It would make more sense too to watch the latter film a second time than this one.

The film begins with a man getting slain after having sex with the words YOU’RE NEXT written in blood.  The film moves to a family reunion organised in a big mansion to celebrate the wedding anniversary of a father and mother (Rob Moran and Barbara Crampton).  Arriving first on the scene are Crispian Davison (A.J. Bowen) brings his new girlfriend Erin (Sharni Vinson) followed by other siblings.  Other siblings arrive and then one by one, they are killed without apparent reason till the cause is revealed later on in the film.  Somehow the survivor is Erin who discovers the real truth about her boyfriend.  All the killings are executed with the excessive violence demanded in a slasher movie of this sort, but there is nothing really inventive or remarkable about the whole enterprise.