British suspense thriller CLOSED CIRCUIT has an early Wednesday opening.  ONE DIRECTION:THIS IS US and GETAWAY open Friday.

CLOSED CIRCUIT is a modernized spy thriller set in the age of closed caption technology.  From start to the end of the film, these cameras can be seen everywhere in London, zooming in on any individual, sound and all, to record every movement.  Big Brother is watching.

But despite the film’s title and shots of these closed circuit cameras, the closed circuit is only used peripherally in the story. The characters are captured on camera, but the plot is not on issue of privacy but on the compromising of the MI5.  The MI5 has not commented as yet on the film’s negative look on the organization.

Martin (Eric Bana) and Claudia (Rebecca Hall) have an affair.  But fate brings them together to defend an arrested suspect of the Borough bombings.  The hearings take place in the Old Bailey (the Criminal Court of London) and the film offers familiar sights in and around London around the Thames and various Tube Stations.

For a suspense thriller, the element of imminent fear is not strong enough though there are sufficient segments of the protagonists being watched and attacked.  But this is more than made up by the whodunit element.  The clues and solution to the puzzle make the more interesting elements of the story.  Thankfully, the romance between Martin and Claudia, credible though it may be, is kept at a minimum.

For a suspense thriller, Crowley’s (BOY A) works well enough to keep audiences at the edge of their seats.  CLOSED CIRCUIT is well-groomed entertainment from its musical score, setting right down to all the performances including a welcome appearance of John Humphrys.

Most have heard of Jerry Springer but nit any o Morton Downey J., the talk show host that would make Springer look like Mickey Mouse in comparison.  Morton was a radio and TV host rising to fame like a rocket and plummeting like a rocket as well when his show got cancelled.

EVOCATEUR is the title of the documentary so names as Morton evokes the worst in people.  His live audience often turns into a lynching mob.  Morton would get a guest on his show, provoke him to anger, sometimes physical by pushing him, while getting the audience on his side o the argument.  The guest more often than not walks off Morton’s show or ends up being restraint from hitting Morton.  His shows are so compelling to watch, not because they are good, but for the reason that human beings love to watch a spectacle involving the worst in people.

As they say, a documentary is often as interesting as its subject.  And the directors realize that their subject is a very intriguing one.  So, the documentary contains lots of clips from his show, with lots of shouting matches and punches delivered.  Morton is a very nasty man and the directors seem to derive great pleasure in showing their subject off like a circus.

But there is hope.  The directors finally show the good side of the man which would be equivalent to the film having a happy ending with the audience feeling good.  Morton is diagnosed with cancer and spends the rest of his dying days becoming Mr. Nice Guy.  This is perhaps also the subtle message n this rather wild documentary on he glories of nastiness! 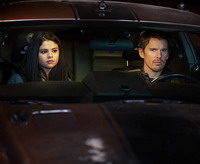 Not to be confused with the 70’s Steve McQueen/Ali McGraw vehicle THE GETAWAY or its remake, this original but unoriginal movie believes in the theory of louder and bigger is better.  The volume of the film is turned up several notches so that it is almost impossible to fall asleep during the screening, but boring that the film is, many of the audience still manage to doze off.

The story concerns broke ex-race car driver, Brent Magna (Ethan Hawke).  His wife is kidnapped at Christmas (why this season is chosen is never clear) and he is to drive a wired car and follow instructions from the voice of a stranger (Jon Voight, recognizable strangely from his jaw alone) less his wife be killed. The film’s setting is Sofia in Bulgaria, likely to save production costs.  He picks up a computer savvy teen, known as ‘the kid’ (Salina Gomez) who together, with their brain and brawn (this is as inventive as the script gets) outwit the villain, or so it seems.  Too many car chases, crashes and loud noises as far as this film critic is concerned.

Gomez is ok and delivers the almost perfect performance of an annoying teenager.  No wonder Justin Bieber left her.  She actually out shadows Ethan Hawkes’ performance.

But for a film of this genre, it falls into the usual traps of minimal dialogue, an over thin plot and a largely unseen villain.

As far as intelligible dialogue goes, here are some samples: ”Shut Up!”  “I Hate You!”  “Stay in the car!” “Asshole!”  I Hate You!”  “Shut Up!” appear enough to send whatever message across.

But for a boring film director at least paces it the best he can by splitting the film into 3 parts.  The first has the car stolen and riven to escape the cop cars, the second picking up the girl and the third outwitting the bad guys.

The film has many scenes in which the car is to be driven into crowd of people for example, into an outdoor skating rink, a park, a Christmas performance outdoors.  There is even a shot of a mother pushing a baby in a pram.  But no one shown hurt or any blood spilled in any of these scenes.  Why bother then as the overall effect is to enforce the incredibility of the film.  A more able director say Nicolas Winding Refn (DRIVE and ONLY GOD FORGIVES) would have a field day with these scenes.

GETAWAY finally emerges as an adult themed action film catered towards the family.  Lots of noise and useless banter just like what the kids would make but which would eventually keep them quiet and the parents happy no matter what kind of film the parents are watching! 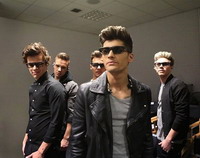 It hardly seems likely hat director Morgan Spurlock be the one chosen the direct a documentary on one of the most commercial subjects at present – the success and lives of the members of a boy band.  Spurlock trashed McDonald’s in SUPERSIZE ME and made the doc WHERE IN THE WORLD IS OSAMA BIN LADEN? which is not only not a documentary but one of that year’s worst films.

Besides allowing footage of ONE DIRECTION ONE performing, Spurlock’s film fails to engage.

The film traces Niall, Zayn, Liam, Harry and Louis' meteoric rise to fame, from their humble hometown beginnings and competing on the X-Factor, to conquering the world and performing at London's famed O2 Arena.

The gist of the film appears to be drumming the fact to the audience that the band members are ordinary teens. This Spurlock does many, many times – not only too many but intermittently interspersed throughout the film from start to end.  The audience sees the individual lads at home, with their parents, goofing off off-stage and before performances.   The only one true moment captured on film is the scene by the campfire when the lads discuss the point in time that inevitably will arrive that the boy band will be no more.

Spurlock also takes the audience across the globe to different parts of the world where ONE DIRECTION performs from Japan to Africa.

But the film is almost a complete bore saved only from the footage of ONE DIRECTION at their various performances.