Lots of movies opening this week, which is typical for the fall season.  Animated movie CLOUDY WITH A CHANCE OF MEATBALLS 2, RUSH and DON JON are the big ones making their debut.

From the first 5 minutes of the film’s opening, one can tell exactly what is going to happen in the entire film including who the not-going-to marry protagonist is to wed. (Montana is living at her flat opposite handsome Wright who is played by Derek Luke ho is single and has second star billing n the credits)

Montana (Paula Patton) is a flight attendant and thus the film’s ridiculous title.  She just missed out on her latest prospect at marriage.   Her best friend, the gay Sam (Adam Brody) and busty Gail (Jill Scott) decides to hook her up with all her ex’s with the hope that one of them will be now suitable.  They find out when they are flying (since this is Thanksgiving season) and Montana will schedule her work to ‘accidentally’ meet them on the plane.

This is entirely brutal to watch.  Each possibility obviously does not work out in each unfunny and uninventive sequence.  The audience is forced to sit through prospect after prospect till Wright comes along.  The airport chase sequence that makes the film’s climax is unclimatic in execution.

The actors playing the beaus are all buffed up perfectly bodied candidates – no acting skills required.  Paula Patton is a klutz at comedy and hardly generates any laughs

This is a Afro American romantic comedy that would make Tyler Perry proud -proud that he does not make films as bad as this one.  BAGGAGE CLAIM is a film that must be seen to see how a film should not be made.

It seems only like yesterday but it has been 4 years since the first CLOUDY WITH THE CHANCE OF MEATBALLS appeared on screen.

The sequel begins right where the first film left off, so it might be good to know what happened in the first one.  Young invertor Flint (Bill Hader) has made a food-making satellite that went out of control.  Forced to leave their hometown in the first film, Flint and pals have to stop their machine once and for all.

The novelty of the first film is the sky raining down with food, like meatballs.  But the filmmakers soon realize the limitation of that novelty.   Food is inanimate.  Son n number 2, the food-making satellite now creates sentiment food animals.  These creatures can talk, walk and mostly do cute gestures that will amuse kids and adults that have not grown up.  “There is a ‘leek’ in the boat”, is likely the best joke in the movie – tough a corny one.

But humour is slight and directors Cameron and Pearn’s film is short of laughs.  Most of the humour involves the foodimals looking at he humans, and then screaming and running away.  The same antics grow tiresome after a while.

The first film was more inventive and funnier despite non-talking food products.  Most of the original cast such as Sam Sparks (Anna Faris) and Tim Lockwood (James Caan) are till resent, but they do not do much to the story.  Then obese major in the first film is sadly missing in this one.  A bit of message involving keeping the planet blue is also included n this film.

DON JON is the writing/directorial debut of actor Joseph Gordon-Levitt who has made his mark in quite the few remarkable movies such as (500) DAYS OF SUMMER, LOOPER and MYSTERIOUS SKIN.  When an actor tries his hand at directing, it is not uncommon to find the result an egoistic flop, but considering the directors that Gordo-Levitt has worked with, one might expect a worthy first effort.

DON JON has the most ridiculous premise on paper, a script that would likely be rejected by a producer on first reading.  The protagonist is a porn addict who finds true love in the form of Barbara Sugarman (Scarlett Johansson).  Jon is called ‘The Don’ by his two drink buddies for the success he achieves in getting the girls.  Jon (Gordon-Lewitt)is a New Jersey bartender and womanizer.  But nothing can compare to the endless parade of images he finds on the web.  Even after what would seem an exhausting session in the sack, Jon still feels the call of his laptop.

Considering the silly premise, Gordon-Levitt has directed quite the credible and effective feature.  He is able to make the audience believe his story – and this is no easy feat.  It would be a worthwhile wait to see how this talent will come up with on his second directorial feature.

ENOUGH SAID is an indie made romantic comedy.  The story involves Eva (Julia Louis-Dreyfus) a divorcee working as a massage therapist who meets Albert (James Gandolfini) at a party as well as a new friend Marianne (Catherine Keener).  Eva and Albert start dating and a relationship develops.  Eva discovers that Albert’s ex is actually Marianne, her new client.  Eva lets Marianne’s bitterness affect their relationship.  ENOUGH SAID of the story.

Holofcener’s comedy and film works on words.  The dialogue is simple and funny and the message gets across.  Instead of the typical director using images to get an idea across, Holfcener uses just the correct amount of dialogue.  The first date is successful because Eva and Albert engage in an evening of comical conversation.  When they have their big fight, the cause is the unthoughtful words communicated during their party.

James Gandolfini delivers a cast-against-type role as a sensitive, gentle romantic bear.  But it is Eva’s character that is a problem.  Eva comes across as slightly neurotic, insincere and too talkative for someone to be romantically involved with.

Flaws aside, ENOUGH SAID still manages to engage as a charming romantic comedy, the first with Thanksgiving as a setting for the October/November holiday.

From the Philippines and a hit of Cannes this year, Erik Matti’s ON THE JOB is an impressive small budget film that centers on four men struggling to survive and a make living for themselves and their respective love ones.

Two men, the elder Mario (Joel Torre) and Daniel (Gerald Anderson) are inmates which hired as contract killers.  The premise is that after the killings often sanctioned by corrupt government officials, they can be returned to prison without a trace.  The other two are police officers Joaquin (Joey Marquez) and Francis (Polo Pascual) stuck in a conflict to do what their duty tells them.

Mario is forced to retire after the parole has been given to him and Daniel the younger inmate and apprentice of Mario set to replace the job as hired killer. or what the higher officers told them to do.

Part of the reason that ON THE JOB looks more gritty and realistic than Hollywood crime thrillers is the lack of expensive CGI and special effects.  More often than not, the latter reminds the audience that they are watching a movie.

Director Matti gives equal time to both the thugs and the police officers.  When the audience given both point of view, the fight between good and evil becomes more ambiguous as one understands the need to support and feed a family.  The majority of the film also deals with the drama of the characters rather than the action.  Though the climax is the battle between good and evil, there is a good ending(not revealed here) and is not clearly black and white.

As a bonus, Matti offers the audience a look at the poorer side of the Philippines, with its shanty shacks and dirty narrow streets.  The film is so realistic that one wonders if such corruption is actually going on the way depicted in the film.

This documentary on Bordeaux wine begins with an aerial shot of the unmistakable brown waters of the Gironde River flowing by Bordeaux before the camera zooming in on the acres and acres of vineyards.  For those who have visited the city or Bordeaux, France, this segment brings back fantastic memories of the wine region, with la dune de Pyla (the largest sand dune in Europe) close by.

For the first 30 minutes or so, directors Ross and Roach educate and fascinate the audience with the history of this wine region, how the grapes have to be spoken to and treated with love, how the industry has survived revolutions and wars as well as the points of view of experts that include renowned wine critics, chateau owners (Chateau Lafitte, Margeaux and Latour) and CEOs and vintage collectors.  A vast field of knowledge is imparted here and one cannot deny the fact that the directors have done their homework.  The film, narrated by Russell Crowe takes the audience from the growing regions, the wine cellars, the wine competitions to the auctions in France.

But at the 30-minute mark, directors Ross and Roach pulls out the carpet from right under the audience’s feet by moving the setting to China.  China has become the great new market for Bordeaux wines.  The film goes on with an exhaustive account of incredible information such as the birth of fake Bordeaux wines, wine growing in China and billionaire Chinese wine collectors having their say.  It is also intriguing to learn certain facts – such as the Chinese going for brand names; every Chinese knows the brand Chateau Lafitte.  The sights of grapes growing in the far out regions of China has to be seen to be believed.

For a film dealing with two extremely different cultures, the film pays due respect to both, never putting China or France down.  Yet the audience is shown both sides of the coin – the snobbishness and pride of the French and the commercialism, greed and diligence of the Chinese.

RED OBSESSION is an extremely educational and entertaining documentary on a subject almost every connoisseur of fine food will enjoy.  Just as one wine grower says at the end of the film of his wine that at a couple’s dinner, he hopes his wine will make a difference to their evening – to please rather than impress them.  Ross and Roach’s documentary has succeeded in both – pleasing and impressing their audience.

RUSH, the new Ron Howard (THE DA VINCI CODE, A BEAUTIFUL MIND, APOLLO 13) movie, is as the title implies a rush of adrenaline flow, based on a story with a Formula One racing setting.  The film is made even more exciting knowing that what occurs on screen is based on history on race rivals, Austria’s Niki Lauda (Daniel Bruhl) and Britain’s cocky James Hunt (Chris Hemsworth). 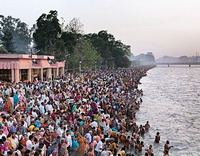 Canada’s darling Jennifer Baichwal, following her highly successful MANUFATURED LANDSCAPES returns with another well cinematographed documentary on the topic of water that could also be entitled NATURED LANDSCAPES.  Most of the landscapes displayed on screen include dried out river beds, the bathers at the sacred river at Allahabad, the woodcuts of snow covered trees an the enormous dam in China that puts the Hoover Dam to humility.  The film also includes a brief commentary from people in the know on the cycle of water and its importance, though not as exhaustive as one would expect.  Baichwal’s film also lacks a stronger narrative to get her message across.  But she and fellow director/photographer Edward Burtynsky have nevertheless given audiences a wonderful looking film.

Bes Comedy: This is The End