The Film of the Week is the animated Japanese feature from Studio Ghibli THE WIND RISES.  It is Master animator Hayao Miyazaki’s last film and it is a worthy swan song.  Wonderfully animated, poetic, entertaining and based on a true story. 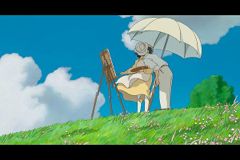 Big Films opening this week are POMPEII and 3 DAYS TO KILL, which are both pretty bad.

This informative and often amusing documentary charts 100 years of the history of the U.S. Federal Reserve.  It would be easy to dismiss the film as one aimed at Economics geeks, but to writer/director Jim Bruce’s credit, he has inserted enough bits (animated, comedic routines, old film footage) to keep his audience entertained.  And the bonus of it all is that the secret of making money is embedded in the film’s message, which will not be revealed in this review.

Director Bruce begins his film with the saying: "When you or I print money it's called counterfeiting."  "When the Fed does it, it's called monetary policy."  It is the simple formula of lowering interest rates by printing money in order to stimulate the economy and vice versa.  The film begins with the burst Economic bubble resulting in the Feds bailing out companies like AIG and General Motors a year or so ago and comes back to the present time.  In the meantime, the audience is treated with an amusing history lesson beginning with the Depression leading up to Black Monday (October 19th 1987) up to today.  While all these take place, the Fed Reserve under chiefs like Alan Greenspan and others weave their web of intervention.

The highlight of the film is the segment with Greenspan as Chief of the Fed Reserve.  He kept interest rates low (close to zero, such as 1%) with the result of the stock market rallying positively.  The film cries out the dire consequences.  But the lessons learnt here can make one a wealthy man.

Watch the film and get rich!

MOULIN ROUGE – THE BALLET would be more appropriately called Moulin Rouge – The Ballet – The Movie.  The 2 hour 40 minute is a full recording of one performance that includes the intermission time and the curtain calls at the end of the film.  Watching it is close to being seated at a performance.

MOULIN ROUGE is performed by the Royal Winnipeg Ballet Company under the choreography by Jorden Morris.  It is the RWB biggest success to date  though a few empty seats can be observed when the camera pans he theatre.

Everyone is familiar with the story of the doomed city of Pompeii with volcano Mt. Vesuvius erupting; so don’t expect any surprises even though they added a story of a gladiator in love with a lovely upper class merchant’s daughter.

Director Paul W.S. Anderson (the RESIDENT EVIL films) appears just to going through the motions with uninspired stuff that is only given the occasional lift by the special effects, like the addition of the tsunami.  But tsunamis have already been given the full-blown treatment in many other films including Cline Eastwood’s THE HEREAFTER.

Even the hero and villain are mediocre.  Milo (Kit Harington) would look much better without his silly moustache, as he did in GAME OF THRONES.  The villain, the Roman Senator Corvis played by Keifer Sutherland is not evil enough nor does he appear long enough in the film.  This is a surprise as three writers of the script would have been able to figure this out.

The mundane plot involves Pompeii in the year 79 AD where a slave turned gladiator, Milo (Harington) races against time to save true love Cassia (Emily Browning).  Her mother, played by Carrie-Anne Moss has star billing as her mother with an over-wrought death scene.

For a 3D film, it is hard to see all the images, as everything is really dark.  (If you are going to see POMPEII to watch the scantily clad bodies, good luck!)  POMPEII is a boring mess and it would do wise to skip this.

Written by both Penn and Teller, the magic duo famous for their Las Vegas act, TIM’S VERMEER is a quietly humorous film directed by Teller (the silent one) that contains a few scenes with Penn in it.

The Dutch painter Johannes Vermeer is famous for his photograph real looking paintings.  The Tim of the film title is a Texas inventor by the name of Tim Venison who sets out to prove that the unfathomable genius of Vermeer is actually fathomable.  By the use of a mirror contraption, he attempts to prove that a non-artist like himself can reproduce one of Vermeer’s great works in this case, The Music Lesson.

Teller allows Tim to often speak to the camera and talk about his quest.  It is a very long and tedious process longing close to 150 days, which Tim constantly grumbles to the camera, to the audience’s amusement.

Though the film is occasionally slow paced, the you-can-almost-watch-the-paint-dry film is however, never boring but in fact quite amusing in Teller’s apt hands.  The film also proves that one can succeed if one puts ones heart and soul into a project.  One cannot help but come out of this film with a great deal of admiration for Tim Venison.

Miyazaki’s films constantly demonstrate common treads like Japanese mythology and fantasy and true love.  While THE WIND RISES  centers on two real life characters for a change (one an author an the other the engineer, Jiro) with no journey into the unknown such as SPIRITED AWAY, the beginning of WIND contains a fantasy dream sequence in which the young hero, Jiro dreams of flying high in the clouds in an airplane.  Jiro and Caproni, the Italian aeronautical designer share the same dream in a inspiringly imaginative sequence.

The love element here is as strong as in PONYO, made a few years back where the love between a young girl and a human boy threatens the stability of Earths elements.  In THE WIND RISES, Jiro spends a good many years of his life before he finds the girl he once met during an earthquake.  After the encounter, he finds that the relationship is tested once again when she reveals to him that she suffers from Tuberculosis.  It will be almost impossible to hold the tears back in the segment where she runs away from the sanitarium to get married to Jiro, at the danger of her health.

The version I am reviewing (I have seen the film twice) is the original Japanese version with English subtitles.  The version being screened at the theatres, however is the dubbed version.  (My preference is always the original foreign language version though Disney and Studio Ghibli have gone to great pains at getting the dubbing done well.)

The film’s title is taken from the French Paul Velry’s lyric, “The Wind is Rising, so we must attempt to live.”  As poetic as the verse goes, the mood of the poetry is alive and felt throughout the film.

Miyazaki’s animation is as detailed as ever, the most beautiful sequence being a shot of the real Mt. Fuji with the (supposed) camera moving below to reveal the girl’s sanatorium.  The aerial (animated) shots, especially with little figures moving around are stupendous.

The film deals with the sensitive topic of the design of WWII fighter planes for the enemy, as Japan was an ally of Nazi Germany.  The film also contains segments in which Jiro spends time in Germany learning German aeronautical design.  But as the setting of the story is pre-war, Miyazaki gets away with Jiro’s verbal denunciation of his plane design being used for the purpose of bombing.

THE WIND RISES is Miyazaki’s more mature work and is said to be his last film.  Even the music heard on the soundtrack is more somber compared to his other features.   The film is a worthy swan song for this Japanese Master of animation that has no comparison.

Best Action: The Hobbit2: The Desolation of Smaug