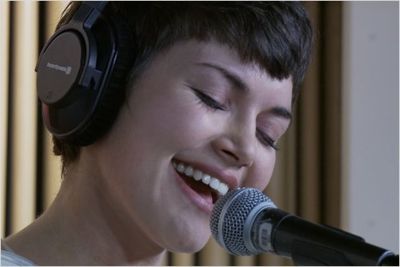 LA MAISON DE LA RADIO is a vibrant film about listening and the value of great public institutions. Master documentarian Nicolas Philibert, director of award-winning TO BE AND TO HAVE (2002), turns his probing, sensitive camera on the inner workings of the inspirational public broadcaster Radio France—the French equivalent of the BBC—to enchanting, enlightening and frequently humorous effect.

March Doc Soup filmgoers are in for a treat.  Master documentarian, best known for his Award Winning TO BE AND TO HAVE about school kids has his new film about a public radio house, Radio France screened.  Like his TO BE AND TO HAVE, Philibert adopts a free-wheeling approach allowing the energy of his subjects take the limelight.  There is no narrative but the subjects are shown on camera at their work, be in announcing, playing music, performing administrative or managerial duties or just talking about what they think are important in general, like potatoes saving the world.  The result is a charming, entertaining film that requires no great concentration or work.  Just sit back and enjoy, life and life at LA MAISON DE LA RADIO.