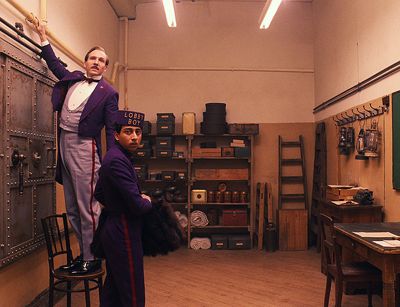 Big films opening this week are NEED FOR SPEED and the new Wes Anderson comedy THE GRAND BUDAPEST HOTEL.

Viilleneuve does David Lynch in ENEMY.

In MULHOLLAND DRIVE, Lynch’s film makes total sense the initial 75% of the film before taking off on a tangent to an illogical narrative for its last quarter.  In Villeneuve’s ENEMY, the film makes no sense from the very start.  That is the beauty of ENEMY.

The plot (apparently based on a novel by Jose Saramago) has a successful college professor, Anthony (Jake Gyllenhaal) leading a comfortable life with his expecting wife (Susan Gadon).  A colleague recommends him a film in which he recognizes his doppelganger in it.  Compulsively, Anthony looks him up and finds him to be an unemployed actor living with his girlfriend (Melanie Laurent).

Weird as weirdness goes, the two start about exchanging partners.  Though it gets a bit confusing trying to decipher whether the Gyllenhaal we see on the screen is the professor or actor, t all comes to place within a while.  Or does it?  Villeneuve brings his audience for quite the ride that includes a giant spider clambering the apartment wall and a secret meeting of gentlemen and prostitutes delivering spiders on a tray.

The film is set in Toronto as recognizable by its skyline and an early morning radio show announcing traffic problems along one of Toronto’s expressways.  But the city is shot in a grey misty atmosphere offering the notion that something is amiss in the city.

ENEMY is the most dumbfounding film I have seen this year.  And I mean this in a good way.  Villeneuve has kept his audience glued to the screen from tart to finish trying to follow his narrative 100% only to leave everyone mind f***ed!  But he does give a warning at the start of the film with these words splashed on the screen: “Order is chaos yet un-deciphered.

THE GRAND BUDAPEST HOTEL tells the story of the hotel’s most famous concierge, M. Gustave (Ralph Fiennes).  It is told by storyteller meister Wes Anderson (THE FANTASTIC MR. FOX, MOONRISE KINGDOM, THE DARJEELING LIMIED, THE ROYAL TENENBAUMS) with his famous filmmaking traits such as his wide-pan tracking shots, colour, spot-on and bitingly funny dialogue and contains a whole slew of actors (Bill Murray, Jason Schwartzman, Adrien Brody, Edward Norton) that have appeared in his previous films.  THE GRAND BUDAPEST HOTEL is also his best movie.

As in true classic storytelling a teenage girl approaches a statue in a courtyard and leaves it at the end of the film while reading a chapter in the book about the author’s visit to the hotel.  The young hotel (Jude Law) is invited in the most polite of manners for dinner with its owner, Mr. Moustafa (F. Murray Abrahams).  Zero (Tony Revolori), as he is known when he was a lobby boy under the charge of concierge Gustave had a whole series of adventures that started from Gustave’s great affinity to the hotel guests.

These adventures include cat-and-mouse between Gustave, Zero and Madame D’s (Tilda Swinton) henchmen, a ski/bobsled chase, theft of a priceless painting all set during the beginning of the War, which makes great filmmaking.  Anderson’s film has chases, action, romance, period atmosphere, humor but most of all great dialogue.  The film contains so many quotables that it would be wise to bring a notebook and someone who know shorthand.

Surprisingly, Anderson keeps the momentum paced well all throughout the film.  Surprisingly, the lack of a climax does not help the film, but the story comes full circle.  The result is one of the most entertaining and colorful pieces of the year.  If you stay for the end credits, you can enjoy the dancing of an animated Moustafa dancing at the bottom right of the screen.

As the title of the film implies, NEED FOR SPEED is a high-octane chase and race film in which plot does not matter.  It is based on a video game.

After being released from prison for a crime that he didn't commit, a street racer, Tobey Marshall (Aaron Paul), is set to race cross-country and to avenge the death of his friend Pete (Harrison Gilbertson).  The villain of the piece is Dino Brewster (Dominic Cooper from THE DEVIL’S DOUBLE) who framed Tobey and is also Pete’s sister’s boyfriend.

Tobey’s character is supported by a bunch of loyals who all try the best to be cool.  Benny (Kid Cudi) teaches rap fitness while serving time, Finn (Rami Malek) bears all when he quite his tiresome job while Monarch, the eccentric organizer of the race (Michael Keaton) hams in up the best he can. The result is all of them looking incredibly childish and idiotic.  The coolest actor of the lot turns out to be Dominic Cooper as the villain.  These people should learn that one is either born cool or not they can die trying.

The entire story is an excuse for racing.  The segment in which Tobey’s car has to be refueled at red neck speed, of course makes no logic as is the need to travel to California in the neck of time.

The races are all aptly shot but the audience could do without all the high fives and self congratulationary remarks of the characters.

Running at over 2 hours, NEED FOR SPEED is a tad too long.  There is the race before the race, which is the climatic race in which 5 entries compete.  The race before the race should have been totally edited out and the action sequences there incorporated into the final race.  The audience is all ‘raced-out’ by the time the climatic race arrives.  The story is all too predictable in it dos not take a genius to guess that only Tobey and Dino will be left of the 5 to compete with each other as rivals.

Best Documentary: Money for Nothing: Inside the Federal Reserve