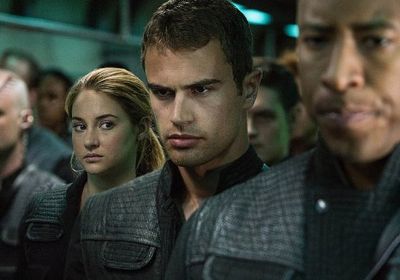 Big films opening this week are DIVERGENT, the new TWILIGHT and HUNGER GAMES hopeful and MUPPETS MOST WANTED.

Both are expected to be hits.

The most anticipated film opens this week and proves to be hit entertainment.

This story takes place in the city of Chicago in the distant future. The city is divided into 5 factions: Abnegation, meant for the selfless; Amity, meant for the peaceful; Candor, meant for the honest; Dauntless, meant for the brave; and Erudite, meant for the knowledgeable. On a given day each year, all sixteen-year-olds take an aptitude test that will tell them for which faction they are best suited. After receiving the results of their test, they must decide whether to remain with their family or transfer to a new faction.

At 16, Tris (Shailene Woodley) is tested DIVERGENT, which means she belongs to more than one faction.  Divergents are deemed threats to peace as they do not fit into any faction, and are hunted and eliminated by Dauntless.  Tris has to keep the secret while she opts to enter the Dauntless faction for training.

The film goes on with her training before revealing half way through the film, a plot by Erudite to eliminate Abnegation, which was Tris’ birth faction.

Director Burger is no stranger to the action sci-fi genre.  His LIMITLESS was a delight and THE ILLUSIONIST was mesmerizing..  Focusing on story and a strong romantic element (between Tris and her leader, Four played by Theo James), all the action is meaningful.  Ethical issues such as the price of peace are cleverly tied to the plot.  Special effects are of course present, and are kept at a minimum thus aiding credibility.  There are no meaningless action sequences or silly car chases.

Shailene Woodley, best remembered as George Clooney’s daughter in THE DESCENDENTS fares well as the heroine, requiring her to display strength in the fighting scenes and in emotion as with the death of a loved one.  Hunky Theo James proves that he not just a pretty face or body.  Trained in London theatre, he shows great promise as a talented good looking star.  And Oscar Winner Kate Winslet offers star power as Jeannine Matthews, the female villain of the piece.

Running at 2 hours and 20 minutes, the film covers all the material in the Veronica Roth novel.  The book was reviewed in The New York Times as rich in plot and imaginative details.  The film matches the standard.

The plot contains all the elements that make good storytelling of film adaptation series.  Tris is in training school in preparation for some higher purpose, just as Harry Potter in the HARRY POTTER films.  She learns of her strengths just as action heroes learn how to use their super powers (e.g. SPIDER-MAN).  War games as in HUNGER GAMES exists where one must be able to fight individually as well as in groups.

DIVERGENT cost $80 million to make.  The bar of success is $70 million in box-office for the first weekend.  On the first day of advance sales, half the tickets were sold surpassing the TWILIGHT film five times.

Also, this paragraph contains a disclosure regarding conflict of interest.  I own $30 grand of Lionsgate stock, the company responsible for HUNGER GAMES and DIVERGENT.  Though it can be argued that I should not write this review as it might be deemed a conflict of interest, I do believe that my readership, though substantial will not affect the stock price of Lionsgate.  And after all, it is an excellent dystopian commercial movie.

One of the daily routines in busy Dubai is the receiving of the dabba or lunchbox.  These boxes are prepared by wives that are delivered to their husbands at work.  The film tells the tale of a wrongly delivered box and the relationship that develops between the neglected woman, Ila (Nimrat Kaur) and the government worker, Saarjan (Irrfan Khan from last year’s THE LIFE OF PI).

But it is hard to believe that the lunchbox delivered to the wrong recipient would continue again and again.  The problem is addressed at one point in the film when she confronts the carrier who insists that there has been no mistake in the delivery.  But this does not answer the nagging question.

THE LUNCHBOX is neither a love story nor a film that settles the problems of the characters’ lives.  In fact, it is quite the opposite.  Whatever problems still exist at the film’s end, though the characters have a clearer idea of what they are facing.  The film does, however, paint a good portrait of the hustle and bustle of the subcontinent city life.  In fact the first 10 minutes, in which the camera depicts the goings-on of the city (over-packed trains and overcrowded streets) is quite like Alfred Hitchcock’s NORTH BY NORTHWEST where Hitchcock shows the craziness of an advertising executive’s life in the New York.

The relationship between the accountant and his understudy turns out to be more interesting that that of the man and the woman who makes the lunchbox.  It is easy to see why as the two men interact whereas the man and woman do not.  But the two stories come together at the end when the understudy guesses that the girl in his supervisor’s life is the one that cooks his lunch meals.

THE LUNCHBOX is entertaining as an observation piece – of both of how relationships work (or fail).  Though THE LUNCHBOX has a look similar to SLUMDOG MILLIONAIRE, there is no fairy tale ending.  But the film won the viewers’ choice award at the Cannes Critics’ Week.

And just incidentally, in Britain, what Saarjan receives is not called a lunchbox but a tiffin carrier.

MUPPEST MOST WANTED is the sequel to the reboot of THE MUPPET MOVIE , that being Disney’s THE MUPPETS which made a ton at the box-office that I hated.  Thankfully, this film beats a lot of odds in the sequel being better than the original.

The plot has The Muppets hiring a manager in the form of the number 2 biggest crook in the world, Dominic played by Ricky Gervais.  He has teamed up with Number One, Constantine, a Kermit look alike who has just escaped from The Gulag in Siberia.  Kermit is kidnapped and replaced with Constantine.  The Muppets, unaware of the switch, tour Europe while Number 1 and 2 rob buildings next to the performance venues.  Humour is also provided by Interpol agent Jean Pierre Napoleon (Ty Burrell) working with Muppet character Bald Eagle in solving the case together caustically and then amicably.

The film stays true to the success of its roots.  The film contains plenty of silly puns, musical numbers (including the outrageous Gulag Follies) and lots of star cameos – all of which made The Muppets TV series addictive to watch week after week, even by adult audiences.  The Kermit Piggy romance is still there, with a wedding as a clever plot twist.  And all the favorite Muppet characters get to do their famous acts like the Swedish Chef, Gonzo the Great, Animal and of course, Fuzzie Bear.

The actors in MUPPETS MOST WANTED are a 100% improvement over the last film.  For one, they replaced my two most unfunny, obnoxious comedians (Jack Black, and Ken Jeong) in cameos in the last film with the funniest (but still obnoxious hilarious as a Golden Globe Awards host) as the main lead in the film.  Whereas Disney’s THE MUPPETS only had a limited number of guests like Chris Cooper and Amy Adams, MUPPETS MOST WANTED has a slew lot more that incudes Sean “Diddy” Combs, Salma Hayek, Lady Gaga, Danny Trejo (with the best cameo joke in the film) and Christophe Waltz as themselves while others like Celine Dion, Ray Liotta and Stanly Tucci, just to mention a few, play pop up characters.

But what works is that this film has taken the MUPPET series to a new success level.  While Disney’s THE MUPPETS was basically one stretched out TV Muppets episode disguised as the Muppets Telethon which turned out boring (I rated this film 2 stars), this one is multiple episodes set in different countries with different stars (Christophe Waltz, yes doing the waltz in Germany, Salma Hayek dodging bulls in Spain etc.).

The film also parodies lots of escape films from THE SHAWSHANK REDEMPTION to every other escape movie including THE SOUND OF MUSIC.  My favorite is the prison escape sequence where the convicts escape during their musical performance and when the warden realizes this during the scene curtain call, just as the Von Trapp family escapes during their performance.  But the last scene in which the Muppets, one by one shout out; ’Take me too (back to the Gulag)’ could and should have been made into a parody than left as a clichéd ending.

MUPPETS MOST WANTED are up to the box-office test opening the same week as the much anticipated DIVERGENT, the next HUNGER GAMES hopeful.  Though both films stand a good chance as they target different audiences, it would be a good close fight for the number one spot.

A bit of background is needed before watching NYMPH()MANIAC or reading the review.  The film is screened in two 2-hour parts, Volume 1 and Volume 2 and is the abridged, cut version of Von Trier’s original opus.  The only time the five and a half version was shown was at the 64th Berlin International Film Festival.  All over the world, which includes North America, audiences will have to pay and watch individual films as Vol. 1 and Vol. 2.  But both parts were screened together for press and both parts will be released (at least in Toronto and most of Canada) together.  But both parts should be seen, not too far apart from each other, so that the film makes sense (at least in Von Trier’s way of making sense) and that each part will remain fresh in memory.  Vol. 1 opens in the U.S. only an Vol. 2 later in a few weeks.  But the review will be an aggregate of both volumes.

NYMPH()MANIAC is the third and final entry of Von Trier’s ‘Depression Trilogy’ the other two being ANTICHRIST and MELANCHOLIA.  But the stories of each film are independent of each other.

Von Trier’s film opens with a 2-minute blank grey screen.  The camera then pans down a wall with dripping water, all of which is the set for Seligman to find the beaten Joe in the alleyway.  So, despite the abridged version, do not expect the film to move fast.

Von Trier’s film is stylized, and filled with artistic references  (Faust, Bach) wit much to read between the lines (or images as they may be).

But what is notable is the reason for Joe revealing all to a total stranger.  Is she hoping for redemption or perhaps a reward to her rescuer, as Seligman is revealed as an asexual character incapable of having sex with either male or female.  In one key scene, Seligman moves in to Joe with his private part showing, so perhaps Joe’s storytelling has achieved some good, though not to her advantage.  There is much to ponder on, when watching the film aided by the fact that Von Trier’s film moves at an extremely slow pace.

Vol. 2 is the more disturbing half with segments such as a naked Joe in front of two African men with erect penises, and the one aforementioned with Seligman approaching Joe.

But the conclusion in Vol. 2 (conclusion in the Von Trier sense) still leaves much to be explained as to what really transpired.  But, hey!  This is a Lars Von Trier film.