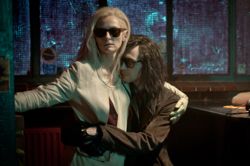 Openings include THE QUIET ONES, THE OTHER WOMAN and BRICK MANSIONS, a horror, actioner and comedy for all tastes.

Director Saulnier returns to the director’s chair after the unheard of horror comedy MURDER PARTY with an impressive grisly violent survival slasher BLUE RUIN, the title derived from the rusty old blue car the protagonist, a vagrant lives in at the start of the film.

Dwight (Macon Blair) is forced to protect himself and his sister after a double murderer involved with killing his parents is released from prison.  He cleans up his act as well as his physical appearance and the killings begin.

What distinguishes BLUE RUIN from the run of the mill slasher film is director Saulnier’s use of a strong narrative to drive his film.  Saulnier reveals only enough of the plot to keep the audience in the know, while always piquing the audience’s interest.  This is aided by a nuanced performance by Blair who develops a strong characterization for Dwight.  Suspense and drama are well blended in this otherwise satisfying horror thriller (the audience feels for the poor protagonist) that should keep fans at the end of their seats.

A remake of the French film DISTRICT 13, Luc Bison’s print is all over this actioner that he also co-wrote.  Stylized action set in a futuristic (in this case dystopian) environment; BRICK MANSIONS is fights from start to finish.

The film is reset in Detroit, where abandoned brick mansions left from better times now house only the most dangerous criminals. Unable to control the crime, the police have now constructed a colossal containment wall around this area to protect the rest of the city (the BANLIEU 13 in the original film.) For undercover cop Damien Collier (the late Paul Walker) every day is a battle against corruption. For Lino (David Belle), every day is a fight to live an honest life.  Their paths cross for the first time when drug kingpin, Tremaine (RZA) kidnaps Lino’s girlfriend, Damien reluctantly accepts the help of the fearless ex-convict, and together they must stop a sinister plot to devastate the entire city.

The film features the physical training discipline called Parkour of which actor David Belle is a co-founder.  As expected, the action segments are crisp and excitingly shot.

It helps too that there is no black and white in the bad and good guys, except perhaps for the major of Detroit.  Tremaine and Lino have a good side while the stubborn side of Damien is also illustrated at the end of the film.

Except for the ridiculous looking rocket, the look and atmosphere of the dystopian future appear realistic enough.

This guilty entertainment piece serves as a good enough tribute for the late Paul Walker (THE FAST AND FURIOUS movies) who died last November in a car crash.

This apparent fight pic begins with an initial round of a match in which the two fighters have already beaten each other to a bloody pulp.  Writer/director Damian Lee then takes his audience into a full ten rounds intercutting with flashbacks telling the story behind the two fighters.

The older fighter is Sailor (Dominic Purcell) fighting for his demons that include his mother (Sheila McCarthy) dying of cancer and a family tragedy involving his wife (Famke Janssen).  The younger, King Solomon (Izaac Smith) needs the winning cash for his upcoming baby with his girl (Jenessa Grant).  So, it is redemption vs. hope in the bout.  Who will win?  The answer is given away early in the film when the money Sailor is offered for losing is sufficient to take his dying mother to Ireland for the last time.

So, the result of fight match, though executed with all its bloodiness turns out not to be that important.  Lee emphasizes all the drama of the two stories to great unbelievability.  As if the odds against Sailor are not enough, the script puts in a nasty promoter (Adam Beach) and a priest (Kim Coates) as well.  And King has a crack head mother and a past that made him give up fighting before (not given much more detail in the film.)

A FIGHTING MAN is more a drama than a boxing film, so action fans beware.  But the drama is too far-fetched and clichéd for any effect.  But one has to hand it for the actors that try very hard to overcome the shortcomings of the script.

In Jarmusch’s vampire saga, the audience s led to believe that blood comes from supplies that can be bought.  So, there is no need for the vampire lovers, Adam and Eve (Tilda Swinton and Tom Hiddleston) to go hunting down victims to suck blood of.  Or so, the audience is led to believe.

There is not much story in Jarmusch’s film.  When the film opens Eve is in Tangiers and Adam is in Detroit. Each doing their own thing.  Adam is a reclusive and disrunted musician of some fame who has taken a human, Ian (Anton Yelchin) under his wing.  Eve’s younger sister, Ava (Mia Wasikowska), arrives from L.A. and shatters the couple's idyllic seclusion. After a night out at a local club, Ava kills Ian, draining him of blood.

The script offers no explanation of how these vampires come about or how he two lovers have survived the present time.  Jarmusch’s film also moves at a snail’s pace, until her cousin appears when things begin to pick up.

Jarmusch’s film is very visual (as stated by Swinton in one  comical segment) and that is the one saving grace of the film.  Tangiers never looked so stunning at night.  Otherwise, the audience is groping in the dark as much as the vampires are looking for the good stuff to drink of.

THE OTHER WOMAN plays like the typical chick flick movie in which females get heir own back on the evil male that has wronged them. The film bears a lot of resemblance to NONE TO FIVE where Jane Fonda, Dolly Parton and Lily Tomlin tie up and beat up their boss Dabney Coleman.

The three actresses on display here are Cameron Diaz, model Kate Upton and Leslie Mann, the first two playing the latter husband’s mistresses,  Carly and Amber respectively.  Each of the three could be termed THE OTHER WOMAN while the cheating husband, mark King (Nikolaj Coster-Waldau, Danish hunk from OBLIVION) gets what he deserves.  The trouble is that actor Nicolaj is so good-looking and charming, he also casts a spell on the female audience, which makes it quite hard to take seeing him punished.

The film could be roughly be divided into three parts.  The first and most effectively funny involves the bonding of Mann, the wife, Kate and Diaz, the first mistress.  It takes quite a bit of work to have the audience believe that two women vying for the same man would bond and work together.   The third comes in smoothly enough in a beach scene which is the film’s funniest moment.

The soundtrack is made up of top 40 tunes also include Lalo Schifrin’s MISSION IMPOSSIBLE theme, which unfortunately highlights the difficulty of making a good original comedy o a well worn theme.

The wide screen works well at times, as in the beach segment where the two meet their new other woman.  But in the confrontation scene in which the husband enters the boardroom to find himself face to face with his three women, the scene would be better done in a more claustrophobic tone.

The script’s (by Melissa Stack) revenge plot is not convincing.  The way the three women steal all the money leaving him penniless is quite implausible.  That could be the reason that it opted for a tasteless ‘poop in the pants’ revenge plot earlier on in the film.

As can be expected in all chick flicks, the males all exist as chauvinist, brainless or mere sex objects.  Mark’s character is a womanizing user with no redeeming qualities except for his sexual prowess.  The role of Kate’s brother Phil (Taylor Kinney) is n better written.  He is another sex object that exist only to provide certain pleasures for the ladies such as designing the perfect beach room for Carly.

As far as acting goes, Leslie Mann steals every scene from Diaz who manages to stand on her own feet only during the second half of the film.  Upton only needs to look great and the script, at least that plays that best to her advantage.

For a comedy, THE OTHER WOMAN contains enough laugh-out loud moments but there are still too many scenes dragged out.

Love and redemption and the Bridge on The River Kwai!  Not the David lean epic but no less quite the dramatic piece in comparison.

THE RAILWAY MAN is Eric Lomax (Colin Firth), an engineer captured during WWII Surrender of Singapore to the Japanese.  Eric and other English prisoners-of-war s were forced labour in the construction of the railway.  When Lomax was discovered by the Japs making a radio, he was tortured almost to the point of death.  While recovering and living in England, he is forced to face the demons and hunt down the war criminal that brought him harm.

THE RAILWAY MAN is a beautifully constructed both narrative wise and in camerawork.   Though obviously not shot in Singapore, the detail in the colour and outline of the terrain looks as if shot there.  The torture contraptions constructed in the film look just alike the ones seen in books on the Japanese Occupation in Singapore during WWII.  Firth is again as marvelous as the troubled soldier and lover.  A film that delves into the aftermath of war effectively!