Inside Out LGBT Film Festival 2014 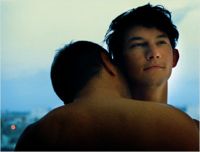 INSIDE OUT LGBT FILM FESTIVAL 2014

The festival of video and film begins May 22nd just after the May 24 long weekend and has a bay of films to enthral all.  Below are capsule reviews of selected films.

For complete film programming, check the Inside Out website at:

Capsule reviews will be added daily as this reviewer sees more films.

THE CIRCLE is a social network that revolved around a gay publication of the same name in the 40’s and 50’s just after the Hitler years.  Though homosexuality was not banned in Switzerland, it was in Germany with the result that many flocked to the Swiss haven for rent boys and other naughty things.  Prejudice was the order of the day and many did not come out and still led closeted family lives.  Those were the bad old days but those days still ring in a lot of nostalgia.  The film interviews Ernst Ostertag and Robi Rapp, a teacher and drag queen who were largely involved in the group.  The couple is portrayed by actors Mathias Hungerbuler and Sven Schelker who act out the scripted depiction of the story.  Haupt’s film is rich in period atmosphere and the film paints a vivid and unforgettable picture of love in forbidden times.  The film just won the Teddy Award for Best documentary at the Berlin Film Festival , though it may be argued if the film is really a documentary except for the interviews.

Gay Israeli director Eyta Fox in light mood here in a film about a song contest called Unisong in which a group of 6 have to overcome personal difficulties to enter.  The lead is the much older Anat whose marriage is n the rocks.  The others are females with one flaming male.  This is kitch at its height and straight audiences might not be ble to tolerate it.  The film attempts to celebrate joy and life but it comes off too flighty and slight.  The songs on display are also too familiar played out ones that one has heard already too often.

A totally fresh thriller that transcends several genres while breaking several filmmaking rules in the process, EASTERN BOYS is an astonishing debut from Robin Capillo about a group of illegal boys from Eastern Europe who live in a one-room hotel in the suburbs of Paris.  In the film , they prey on timid businessman Daniel (Olivier Ravourdin) who falls in love with one of them, Marek (Kirill Emelyanov) and eventually helps him escape from the psychotic boss of the gang (Daniil Vorobyev).  The film starts cinema verite (camera following the boys speaking their own language with no subtitles), then home invasion, then love story and finally escape thriller, Hitchcock style.  Midway through the film, the camera follows a black lady for no apparent reason.  It turns out that she is the security of the hotel the boys are at, and she plays a big part in the plot.  I love it too the way the film avoids a direct confrontation between the hero (Daniel) and the villain (the boss of the gang) that is expected in every Hollywood action film.  This is an exceptionally compelling and fresh film from start to finish and demands to be seen to be believed!  Excellent performances, too, all around especially from Vorobyev as boss.

MY STRAIGHT SON, as the title implies is about a gay father’s gay son.  The son is forced to live with his birth father who has not seen him as the mother is off for studies in London.  While trying to win over the son’s love, Diego (Guillermo Garcia) is faced with a bigger challenge.  His lover and partner, Fabrizio (Socrates Serrano) is gay bashed and in serious condition in hospital.  Gay films that initially had tons of new ideas to address like coming out; cruising; A.I.D.s; relationship appear now to be short of fresh mat4rial.  MY STRAIGHT SON covers the issue of coming out, but with the twos of a father coming out to his son.  Both male partners suffer prejudice from their families and the issue of gay marriage is central the film’s theme.  Initially very funny, the film gets very weepy towards the middle and then quite serious towards the end.  Apart from the over preachy ending, MY STRAIGHT SON is still entertaining fare dealing with key issues but over-brimming with good intentions.

EL TERCERO ((THE THIRD ONE) (Argentina 2012) ***
Directed by Rodrigo Guerrero