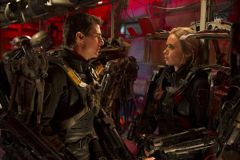 EDGE OF TOMORROW is the big one opening this weekend.  Other small movies opening include THE ANIMAL PROJECT, BURT'S BUZZ and others.

In Jane Campion’s HOLY SMOKE, there is a scene with Harvey Keitel wearing a bright red dress wandering aimlessly in an Australian desert.  Campion’s intriguing film tells of how this cult deprogrammer got to this awkward state of affairs.

One wonders if this serves as the inspiration for Indie Queen Ingrid Verninger’s latest project.  There is an end segment in which her characters are dressed in costumed animal suits and running around in the snow.  Unfortunately, the incidents leading to this state are not that intriguing.

A father (Aaron Poole) and teacher of an acting class devices what he deems THE ANIMAL PROJECT.  While working on it, the students adopt several characters and learn more of themselves and the rest of the team. If all this sounds interesting, it is not and the idea is marred by some very annoying characters, the most annoying of which is the main lead in the film.  If the viewer cannot stand his presence whenever he appears on screen (neither can his screen son, by the way), director Verninger should have noticed this and done something.

THE ANIMAL PROJECT eventually moves towards the final climax of the actors all dressed in animal suits running amok in the snow?  Indie film or not, the entire venture is a waste of time on characters Verninger does not bother for the audience to care about.  Her other films I AM NOT A BAD PERSON/I AM A BAD PERSON..., ONLY are much better.  And the audience cared for the characters in those films.
Trailer:  https://www.youtube.com/watch?v=i421IV8JkGU&noredirect=1

CHEF is a delightful family comedy about a good hearted chef by the name of Carl Casper (Jon Favreau).  This is the story of how he comes to terms with his talent for cooking and his young son, who he has ignored for the longest of times.

Casper just lost his job from a restauranteur (Dustin Hoffman) at a posh L.A. restaurant.  Withe the help of his good buddy (John Leguizamo) he buys a food truck and takes to the road, gathering quite the following with his gourmet on wheels.

Being a respective actor and director (MADE, IRON MAN) for some time now, Favreau obviously had no problems assembling a good cast of cameos that include Robert Downey Jr., Scarlett Johansson and Oliver Platt who plays the food critic that got him fired and the set up again.

CHEF is a good-hearted movie, so good-hearted that even Casper’s ex-wife (Sofie Vergara) gives in to him.  The food on display looks devilishly delicious, the jokes are hilarious and the emotion evoked throughout the film heart-warming.

Based on a story  from the graphic comic by Hiroshi Sakurayaka, EDGE OF TOMORROW has an excellent premise for a summer blockbuster movie.  Aliens are fighting humans for control of Earth.  The Mimics are able to travel back throughout time to refight and thus not make the same mistakes.  Officer Cage (Tom Cruise) kills one mimic (an alpha) and has blood splattered all over him and inherits that ability.  Every time he dies, he wakes up at the same point in time and relives life from there till he dies again.  Thus he is able to possibly win the crucial fight against the Mimics.

The film is a mix between GROUNDHOG DAY and any alien film.  Cage can die as many times as possible and indeed he does to his utter irritation.  No one believes him till he encounter Rita (Emily Blunt) who apparently possessed the same power of reliving till she lost that power.  Together, they join forces to win the battle, with a love interest thrown in.

Christopher McQuarrie’s (THE USUAL SUSPECTS, JACK REACHER) script is clever enough and Doug Liman’s (MR.AND MRS. SMITH, THE BOURNE IDENTITY) direction is nothing short of brilliant.  The film moves really fast and the action scenes are spectacular (best to see the film in IMAX 3D).  The script necessarily contains too many coincidences.  Of the millions of humans living on the planet, Cage has to meet Rita who tells him what to do.  But these coincidences and other flaws are likely overlooked by viewers owing to the fast action packed scenes.

Cruise is Cruise and does what is expected for an action star.  Cruise is also especially hilarious in the film’s initial scenes when he cowardly attempts to wriggle out of combat from General Brigham (Brendan Gleeson).  Blunt is also good as a tough yet vulnerable heroine who eventually succumbs to Cage’s charms.  The film is an Australian co-production, perhaps only noticeable from Australian actor Noah Taylor portrayal as Dr. Carter, the scientist that invents the ultimate weapon to combat the Mimics.

Warning: this film contains frightening scenes that will be too intense for younger audiences.  The fact that one has to be killed and the prospect of reliving ones life are disturbing ideas for the young mind.  It is a scary Twilight Zone concept even for myself.

Running at 113 minutes, the film more than satisfies the summer moviegoers and critics alike.  There is hardly one dull moment in the film.  Action combined with lots of suspense and a totally credible romance and human characters make for the best action flick on screen at present.

The scariest horror films are those that based on incidents close to real events.  THE SACRAMENT from Ti West, no stranger to horror flicks such as THE INNKEEPERS and THE HOUSE AND THE DEVIL uses the 1978 mass cult suicide news of the Jonestown Massacre as his ‘inspiration’.

The film begins touting a magazine called Vice which supposedly reports news of events not usually covered by commercial media.  The audience is put right away in the seat of the found footage, documentary film.  But still, it does not take a genius to know instantly that everything is an enactment.  But to West’s credit, the method works really well.  The film establishes Sam (AJ Bowen) as the lead character.

Patrick (Kentucker Audley) is a fashion photographer traveling to meet his sister Caroline (Amy Seimetz) at Eden Parish, the commune she's been living at since she left her drug rehabilitation program.  Despite some misgivings over his sister's vagueness over the commune's location, Patrick travels to the commune with his friends and co-workers Sam and Jake (Joe Swanberg), who suspect that they might get a story out of the travels.  Once there, Patrick is met by his sister, who is happier and healthier than she has been in a while. His friends begin to film interviews with Eden Parish's inhabitants, all of which speak of the commune in glowing terms. However they soon discover that there is a sinister edge to the commune that belies the seemingly peaceful setting.

West knows how to build up the suspense, which reaches its peak with the appearance of Eden Parish’s leader known to the commune as ‘father’ (Gene Jones).  The best scene has a mute little girl hand Sam a written note saying: “Please Help Us.”  Jones looks his role, but one wishes he would ham it up a bit more and chew his lines with more relish.

One complaint is the film’s  slow pace for what normally is unheard of in a horror film, especially one presented by Eli Roth of the HOSTEL films.  But this allows credibility of the story.  When finally Father induces the entire commune to drink the death portion, one can believe the events that could lead up to this catastrophe.

THE SACRAMENT is a low budget effective little feature supposedly set in Africa.  Of course, any government park could pass off for a place in Africa.  The no-name cast also keeps costs low but they do perform convincingly enough.

THE SACRAMENT has got mostly positive reviews from other critics, me included and is a recommended evening out if one wants a few scares.  Best not to see tho in the early day!