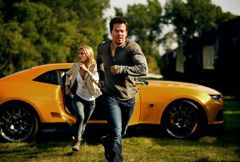 TRANSFORMERS: AGE OF EXTINCTION is the big Michael Bay blockbuster that should wipe out all other competitors at the box-office.

THE PIN is a minimalist romance set during World War II.  As much of the action (or non-action) takes place between a young Jewish girl (Milda Gecaite) and a boy (Grisha Pasternak) in a barn for the entire film’s running time,  production costs are low.  This might be the first film set in WWWII about the Nazis with no Nazis on screen.

The girl is in hiding in the barn, her only memories being of her family taken away.  The boy, has escaped, after being buried alive in a shallow grave full of corpses. and also at the barn. The two have sex, artistically done by Jaye using lots of silouhettes.

The pin of the title refers to the prop the girl wants to be pricked so that she knows she is not dead.  She has nightmares of not being able to move, being buried alive.  THE PIN is a haunting tale, moving precariously slow, though nothing much is happening.  There is a segment in which the boy tells the girl a fairy tale followed by her retelling of the tale.  Segment lasts a full 5 minutes.  THE PIN is a story of redemption as well, as realized by the end of the film.

The film is shot, literally dark, so dark that many images cannot be deciphered, as this reviewer had to watch an online screener on the computer.  The first 3 minutes appear totally black.  Hopefully, this problem does not arise on the big screen.

The only break comes in the form of an intruder, a boy near the end of the film.  What happens at least lifts the film from snooze mode.  But the emotions or events that occur after goes against the flow of the film.

On the plus side, the film has been getting generally positive reviews.  It is easy not to find anything wrong with a minimalist film with little happening on screen at any one time.

THEY CAME TOGETHER begins with two couples at dinner with the main one, Molly (Amy Poehler from SNL) and Joel (Paul Rudd) telling their love story to the other (Bill Hader and Ellie Kemper).  It is the typical love story, they relate with NYC as the third character, much to the befuddled not-too-bright yet amusing other couple.

The camera then swoons to an overhead shot of NYC, as expected, when the opening credits roll.  Writer/director Michael Wain (TV’s Children’s Hospital) goes for the cuteness factor from the very first start.  Molly is klutzy and Joel ‘slightly’ Jewish without being too threatening, in the script’s own words.  Molly and Joel meet and it is hate at first sight.  They go to a halloween costume party both dressed as Benjamin Franklin but have a bad run in on the street before the party.  And so the story goes, one step at a time, complete with shit jokes (Joel’s boss having to do it badly while in his action hero one piece costume) and cuteness all the way till they woo and live happily ever after.

One can hardly go wrong with cute but cute for an entire movie can be a bit much even for a mere 83 minutes.  The audience is not spared from lip-synch songs performed by the two leads either.  Wain offers a breather with a few uncomfortable weird bits such as the meeting of Molly’s white supremacy parents.  The cute bits extend even to the end when Molly and Joel’s reunion is broken up by several characters including his ex-con husband (a neat cameo by Michael Shannon).

The other weird bit is the of the film when it is revealed that Molly and Joel are currently divorced.  This means that they will give the relationship another shot which means a film sequel if THEY CAME TOGETHER does well at the box-office.  How cute can you get?

Nobody does cheesy commercial flicks better than Michael Bay.  And nobody could even be remotely considered even able to direct a Transformer movie but Michael Bay.  Bay outdoes himself in an acton packed summer spectacular extravaganza that should not disappoint his fans.  Enough superlatives already - his film delivers.

The 4th of the Transformer series, reading the synopsis on Wikipedia might prove confusing.  But Bay is all a good story teller and one able to manipulate audiences, so that his film turns out easy to follow, entertaining though manipulative and a helluva fun of a time.

AGE OF EXTINCTION, which could refer to the extinction of the dinosaurs, autobot transformers or the human race is the sequel to Transformers: Dark of the Moon, the film taking place four years after the invasion of Chicago.  Like its predecessors, the film is directed by Michael Bay and written by Ehren Kruger, who served as screenwriter since Transformers: Revenge of the Fallen.

Four years have passed since the final battle between the Autobots and the Decepticons left Chicago in ruins and claimed the lives of over a thousand civilians.  The U.S. government has severed its ties with the Autobots and branded them as fugitives. An elite CIA division called "Cemetery Wind" is formed by Harold Attinger (Kelsey Grammer) with the intent of hunting down and exterminating the surviving Autobots.   Meanwhile, using data obtained from destroyed Transformers, business tycoon Joshua Joyce (Stanley Tucci) and his technology firm Kinetic Sciences Institute (KSI) have discovered "Transformium", the molecularly unstable metal that is the lifeblood of Transformers. Joshua's prized creation is Galvatron, a Transformer created from the data inside Megatron's severed head.

And where are the Michael Bay heroes at this time?  Having family fights - the Bay way as in the Transformers 1 and 3 films.  Father Cade Yeager (Mark Wahlberg), an inventor is having issues with his daughter, Tessa (Nicola Peltz) growing up - never mind the sexy way she dresses or hiding her new boyfriend, Shane (Jack Reynor) from him.  It is the typical action packed film family, in which the father finally approves the boyfriend and the girl in the film saves the day unlike old heroines of past films who do nothing but scream and get killed or rescued.  While the family squabbles are going on, Bay weaves in the story of the underdog inventor aiding the damaged Optimus Prime (Peter Cullen’s voice), the leader of the Autobots.  The Autobots fought against the aliens but are now being replaced by new Transformer manufactured by KSI.  The story gets a bit more involved but not confusing and there is a big climatic slowdown that includes a giant magnet dropping people and trains from the sky, a magnificent car chase and a drop from the roof of a very high-rise building (I actually ducked from the 3D effect in this segment, which I have never done before) that includes a shoot-out.  This does not even mention the transforming from robot to car to dragon special effects.

For Transformer fans, the regular Autobots are present from Bumblebee, Hound, Drift and Crosshairs .  The entire new cast sans Shia Labeouf is good especially Stanley Tucci s a love-lorn over confident inventor who finally realizes the error of his ways.

One can always complain about product placement in a movie.  There are quite the few in this film, but at least Bay infuses humour (Victoria Secret and Bud Light) into the segments.

It is a smart move to have a good chunk of the film shot in China.  China has the largest population in the world and the tactic guarantees a large box-office share from the Chinese market.  The film ends with a promise of another sequel.  I have no complaints for another one, except that Michael Bay be at the helm directing it.

Romance: They Came Together