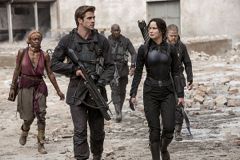 The most anticipated film of the year HUNGER GAMES: MOCKINGJAY Part 1 opens this week.

TIFF presents a Mel Brooks retrospective at the Bell Lightbox.

What is the definition of a homesman?  The film is supposed to provide the answer.

When three women (Grace Gummer, Miranda Otto, Sonja Richter) living on the edge of the American frontier are driven mad by harsh pioneer life, the task of saving them falls to one homesman.

Transporting the women by covered wagon to Iowa, the pious, independent-minded Mary Bee Cuddy (Hilary Swank) realizes just how daunting the journey will be, and employs a low-life drifter, George Briggs (Tommy Lee Jones), to join her.  But the duty shifts from cuddly to Briggs as uneasily as the film shifts focus from one protagonist to another.

The film opens with the title Nebraska Territories flashed on the screen followed by a austere scene in which a strong woman makes a business marriage proposal only to be rejected.  It sets the stage of what follows - a saga on survive in the harsh west.

Based on the move of the same name by Glendon Swarthout, THE HOMESMAN is an odd western.  It has a strong woman that brings the story to a start and deals with women in the west.  The journey in the film is out back east instead of out west.  The land is shown as barren and cruel.  There is nothing stunning in the landscape which the camera is quick to point out.  The camera often pans up to the sky as if to give up on the land.

The film is divided into roughly 4 parts.  The first is the introduction of the lead characters Cuddy and Briggs, who they are and how they meet.  The second is the anatomy of the journey and the third the trip itself.  The fourth and final segment involves a twist that brings the film to its end.

This is not actor Tommy Lee Jones first film.  He made also a sort of western THE THREE BURIALS OF MELQUIADES ESTRADA, which was not too bad a western as well.  Jones has a good eye for staging.  Quite a few segments begin with a surprise - one has Brigg’s lodging surrounded by gunman while another begins with the sight of invading Indians.

The unlikely pair and the three women head east, where a waiting minister and his wife (Meryl Streep) have offered to take the women in.  It is a welcome surprise to see Streep in a cameo and se does command a screen presence.  Swank (Oscar winner for BOYS DON’T DRY) plays a manly female role invoking desperate woman who wants besides a family and stability, human desires.  Jones has top billing in the film and the reason is evident three quarters through the film.

THE HOMESMAN has scenes painfully difficult to watch, the one involving the needle for example.  For a film that is supposed to demonstrate the basic goodness in human beings, THE HOMESMAN is a cry harsh film.  It takes evil to show the good appears to be Jones’ rule in directing.

THE HOMESMAN will likely garnish mixed reviews.  The ending does not help.  The message is delivered three quarters way through the film and the film lacks a more solid closure.  Jones dancing and slapping his knees does not do it.

The most anticipated film of 2014 expected to be the number one box-office sensation of the year (boxofffice mojo estimates $384 million),  THE HUNGER GAMES: MOCKINGJAY PART 1 is an unparalleled money making phenomenon.

Directed by Francis Lawrence with a screenplay by Peter Craig and Danny Strong, it is the first of two cinematic parts based on the novel Mockingjay, the final book in The Hunger Games trilogy, written by Suzanne Collins, and the third instalment in The Hunger Games film series.  Like the last HARRY POTTER films, splitting the last book into two films is a good money making decision.

For those who have followed Collins’ books, there should be no disappointment.  I have not read her books but have asked those who have.  It is of great surprise that there are no ‘games’ in this film nor any substantial action.  This film is mostly drama with suspense.  The action segments are few and lacklustre though the script prepares the audience for the final instalment Part 2 which will be released in a year.  (Both parts costs $250 million to make.)  But fans should be thrilled with this stylish, suspensor with great sets and polished dialogue from a host of stars.

Why is this franchise so popular?  For the number one reason, it is based on a best selling young adult series.  It is sci-fi based, set in the future, video games oriented with action and romance.  The fact that there is a female heroine draws in a female audience bringing their beaus to pay for the tickets.  The first two films are not too bad.  The money momentum continues.

The film begins as a continuation of the last film, CATCHING FIRE.  It does not matter if one recalls the first two films of the series, as the first 15 minutes of the film brings the audience to par in the introduction and where the heroine is at when this film begins.  And this is a good thing.   The film begins with the heroine Katniss Everdeen (Oscar winner Jennifer Lawrence), a seventeen year old from District 12 and victor of the 74th Hunger Games waking up having nightmares.  She has become a reluctant hero and symbol of hope for the nation after escaping the third Quarter Quell.  The fact that she wakes up disillusioned and unwilling to help the rebels is quite different from the previous films.  Here, she undergoes a change, sees and decides to help the people against the cruel Governor Snow (Donald Sutherland) while attempting to save Peeta (Josh Hutcherson) who she thought was killed in the previous games.

All the regulars are back including Stanley Tucci (still donning the ridiculous looking wig), Liam Hemsworth, Juliane Moore (as Madame President) and the late Philip Seymour Hoffman.

The sets are stunning as are the few explosive segments.  The lack of action is seldom felt as the story propels itself quite fast as Katniss recovers and finally decides to aid the rebellion.

THE HUNGER GAMES: MOCKINGJAY PART 2 awaits.  But not till November 2015.

Documentary: Keep on Keepin' On