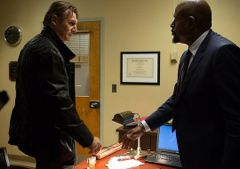 Only two new films opening this week -he excellent Winter Sleep and Taken3.  Lots of leftover goodies from Christmas led by The Hobbbit, Into the Woods and Unbroken.

See the Kubrick Exhibition at the TIFF Bell Lightbox.

The director’s last name of Megaton is probably as real as the events depicted in this French production set in the U.S. It is also as real as an American product. But this is pure Luc Besson cinema, but unfortunately not as good as TAKEN, THE FIFTH ELEMENT or even THE FAMILY.

But TAKEN 3 though not a very good movie is a true sequel. (The film has a current very low rating on the various movie sites). All the main lead characters are present - ex-CIA operative Bryan Mills (Liam Neeson), his wife Lenore ‘Lenny” Mills (Famke Janssen) and daughter, Kim (Maggie Grace), all played by the same actors. Even the minor roles such as Lenore’s current husband, Stuart (Dougray Scott) and Kim’s boyfriend, Jaimie (Luke Grimes) are present. TAKEN 3 is also directed by TAKEN 2’s director. The first two TAKEN films involve Kim’s kidnapping.  Should be noted that no one is actually taken in TAKEN 3.  TAKEN 3 takes the franchise one step further, to the filmmakers’ credit, wife Lenore is done away with early in the film. Yes, the wife is killed. Bryan is the prime suspect - a kind of GONE GIRL actioneer, Luc Besson style.

But the film suffers from an over simplistic but unbelievable plot. The action sequences are not only preposterous but lack continuity. The film begins with an accountant getting killed followed by Bryan Mills framed for his wife’s murder. The blundering cops led by very smart Inspector with European name Franck Dotzler (Forest Whitaker) make it top priority to take Mills in. Mills believes his daughter, Kim is going to be taken next and goes to protect her. In the process, he learns who the villains are and of course, takes them down.

Megaton’s inconsistent direction involves extra long dramatic segments followed by then over long action sequences. There are too many car chases, one noticeably just following a long one. Whatever inventiveness shown initially in the script, for example in Bryan’s ‘predictability’ is slowly lost. For example why put the sticker ‘drink me’ and not ‘meet me in the ladies’ room?’ on the yogurt bottle? There are countless wrongs in the script, but fortunately these could be laugh-out loud moments in the film. If one is a serious TAKEN fan, best sit away for those people. But TAKEN 3 is much worse than the barely acceptable TAKEN.

62-year old Liam Neeson looks a little tired in this 3rd TAKEN and grimaces through his un-inspirational one-liners. It looks like Whitaker was hired to put in a little credibility to the proceedings but with the script insisting of silly ideas like his character playing with rubber bands and bagels to figure things destroys that theory.

Will there be a TAKEN 4? The wife is gone but expecting Kim might provide the new daughter that might be the victim of TAKEN 4. The last TAKEN had bad reviews but made a bundle at the box-office. This one looks to follow suit.

Ceylon’s WINTER SLEEP, the 196-minute saga arrives just a little over a year after his 3-hour ONCE UPON A TIME IN ANATOLA. That film was one of the best films of the year and WINTER SLEEP arrives with accolades such as the Cannes Palme d’Or Prize and Turkey’s official selection for Best Foreign Film for this year’s Oscars. And the film, also set in Anatola, is that good. In fact it is the best foreign film I have seen this year.

The film is about the rich and poor, the powerful and the used. There is no fine black and white between each class as Ceylon’s film slowly reveals, and one often manipulates others to shift classes. The film is also stunningly shot, contrasting as well the harsh icy and snowy winter of Anatola with the beauty of the landscape like the streams and mountains.

Winter Sleep is the story of Mr. Aydın (Haluk Bilginer), a former actor who now runs a mountaintop hotel, and is dealing with his failing marriage.  The pompous Aydın, who is disliked by all including his wife, Nihal (Melisa Sozen) sees himself as the region's kind ruler, intervening in the business of the townspeople below the mountain. He has a column in the local newspaper and is writing a book on Turkish theatre history. When the snow season approaches the guests depart, the tension between Aydın, his wife, his sister who lives with him, and the village people takes over by long dialogues. Conversations dominate the film as the inner workings of the characters are slowly revealed.

The film contains many incidents, one coming after the other in brutal succession here that reveal the tensions between Aydin and his encounters. The first occurs when Aydın is driving down to the village along the cliffs of Cappadocia when a stone smashes and shatters the front passenger window. It was thrown by Ilyas (Emirhan Doruktutan), a poor boy whose motives are initially seen as trouble-making but are later explained as the boy's father, Ismail (Nejat Isler), cannot pay the rent to Aydın the landlord, the latter evicting his family and has already taken their refrigerator and television. Shortly afterward, the incident triggers a physical blow between Ismail and the truck driver (Ayberk Pekcan).  Aydin claims that he hires lawyers and others to take care of the rent business and that he has nothing to do with this predicament, which is entirely false. His wife and everyone else in the film realize this, and so does the audience. The wife, Nihal later on in the film steals money donated by her husband for one of her charity projects to right this wrong. The husband constantly warns Nihal of deeds like this, as people are not that ‘good’. He actually proves her right. And this is the beauty of Ceylon’s film. Nothing can be expected as his drama unfolds. The audiences sympathizes but learns from the characters as well.

But Ceylon has developed a very complex and intriguing character that the audience can identify with. In his hotel brochure in the internet, there are wild horses running One guest of the hotel asks at one point where all he horses are. Aydin has a problem of what he thinks is ideal and reality. And it is his idea of reality that counts. As the film progresses, Aydin undergoes a character change for the better. One poignant segment has him releasing a captured wild horse he had purchased back to the wild.

At one point in the film, Aydin angrily asks his wife what his wrong is. But it is clear earlier on to the audience as he had indirectly referred to her as ‘usable by those seeking charity’. His wife clearly hits the nail on the head by saying that his main fault is his self righteousness.

But Ceylon is a kind director (bringing to mind one of the kindest directors Francois Truffaut who never lets his innocent characters suffer). Aydin returns to his wife at the very end.

WINTER SLEEP is quite a trudge at over 3 hours. But Ceylon’s film is a journey of emotional fulfilment, joyful and playful in spirit but most important of all, it is a masterful work by a Master director working at his prime.

Action: The Hobbit: Battle of the Five Armies

Comedy or Musical: Into the Woods