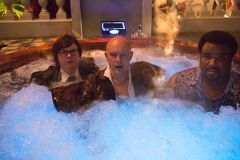 Watching the closing credits for the sequel to the 2010 film HOT TUB TIME MACHINE, the French phrase ‘Un film de Steve Pink’ suddenly appears as if to put in some ‘class’ to this otherwise silly film. It does not make much sense, but neither does the film about a group of friends that travel through time using a hot tub to change present events.

The original film (also directed by Steve Pink) was a hit, very stupid yet very funny. It had the privilege of John Cusack on the lead cast which the sequel does not have. Most of the other cast including Chevy Chase are present in #2 but the inclusion of Adam Scott as Adam Yates Jr.as a new character is the best thing about the film. Adam Scott is terribly funny, especially playing a naive bridegroom, only showing his true colours after having a ladybug narcotic stuck on the side of his neck for 24 hours. He goes crazy, punching strangers, kissing voluptuous girls and having man sex on national TV.

After the events of the first film, it is revealed that Nick (Craig Robinson) and Lou Dorchen (Rob Corddry) used their knowledge of the future to enrich themselves - Nick by ripping off songs (with funny segments included) from artists before they were originally released, and Lou by capitalizing on advance knowledge of technical advances to appear as a tech guru. During a party in Lou's honour, he is shot in his dick (one cannot expect anything less from this movie) by an unknown assassin. Who this assassin is, no one is sure. Nick and Jacob with Lou use the time travelling hot tub to try to get back to the past to learn who shot him and undo the damage. But they inadvertently end up ten years in the future. Jacob reasons that the assassin must have from the future, the events which they must alter if they want to save their present-day environment.

Unlike other time travel films like the recent PROJECT ALMANAC, this film contains absolutely no logic. The characters spew their theories of what happened in the future that could affect the present and vice versa. Nothing makes sense so, do not try to follow any reasoning. The ending of the film gets more ridiculous culminating with totally ridiculous ending credits.

There will be many in the audience who will dismiss the film as a waste of time. But it would be ones own fault for gong to a film like HOT TUB TIME MACHNE 2 expecting more. But if the film was laugh-out loud hilarious, all would be forgiven. Unfortunately, there are not that many of these moments. Adam Scott is a welcome addition to the film, but that is about it for this sequel.

Wyoming is known for Laramie, the setting for the TV show Bonanza or the fictional city of Wolf City as the ballad of CAT BALLOU goes. But it is now also well known unfortunately as the place where in October 1998, the vicious murder of 21 year old gay university student Matthew Shepard took place at the hands of 2 homophobic peers. The film begins with then President Bill Clinton condemning the crime, one that shocked the world and became a rallying cry against homophobic violence and anti gay persecution.

The film is a very personally told tale. It is was directed by Shepard's childhood friend, Michele Josue, and brings to light striking new details about Shepard's life and death, while featuring never before seen pictures and footage of this iconic figure. Josure’s film documents Matt’s life for the first 40 minutes.  Depicted and allowed to have their say about Matt are friends of Matt and others that have known him including his councillor, teacher, pastor and parents.

The crime occurs 40 minutes in the film’s running time, with the film transforming into a dead sombre atmosphere. The killing is described in graphic detail followed with shots of the battered Matt in a coma in hospital as well as the perpetuators in prison.

But what is most moving is the brave decision of Matt’s parents, Judy and Dennis to forgive.  The eulogy delivered by Dennis is expectedly tear-jerking. But this decision that they decide to do after is even more moving. On the other side, anti-gay protestors carrying hate signs such as “matt should burn in hell” or “Gay is ass- f***ing” are equally disturbing. As Matt’s mother says on camera “How can there be should much hatred for someone who is so kind that they do not even know.” This is the necessary other side of the coin that the film addresses as well that is better not seen.

At present, the Matt Shepard Foundation exists which Matt’s brother Logan currently works at. President Obama also has a scene in which a new law involving hate crime is passed, with him stressing tolerance for people who are different. Clinton saying too that intolerance such as this are not an acceptable American values. Hopefully, Shepard’s martyrdom will make a difference.

The story of hate eventually turns out to be a story of compassion. This is not a story that is easily told nor a film that is easily watchable. But it is one that demands to be seen.

The words blatantly appear on the screen “Based on a true story” as the film begins. One gets the first impression director Caro means business.

The original title McFARLAND, USA is the title retained in the U.S. but the U.S.A has been dropped from the title in Canada.  The film depicts the rise to fame of the town that reared new marathon runners winning many state marathons under the guidance of coach, Jim White (Kevin Costner).

McFARLAND is a Disney production. Disney is only too well known for its formulaic films. Of course, not too discerning viewers will not complain, but this unoriginal, sentimentalized drama could have been better. For one, the poster depicting the Mexican runners on the beach reminds one instantly of the British runners in CHARIOTS OF FIRE though in the film, the Mexican runners are headed towards the ocean as they have never been to the sea. One would have expected more from New Zealand director Niki Caro who ‘wowed’ critics and audiences alike in the Maori drama WHALE RIDER. That is likely reason Hollywood picked her to make a film about Mexicans beating incredible odds.

One has to cringe at segments such as shots of the team when the American anthem is sung when director Caro goes straight for cheap sentiment. She is also unashamed at product placement (example Adidas) appearing too often in the film.

But the script contains a few loopholes such as the reason behind the attack on the family bringing for a ride. She emerges dishevelled from the incident with bruises but the film conveniently avoids details of what occurred.

One would have wished McFARLAND turn up a better film owing the its good intentions. But the actors sure give it a hard try, as evident in many scenes especially the climatic marathon race. But it all comes across as too condescending.

The director of this new eye-opening and insightful new documentary, THE WRECKING CREW Denny Tedesco is the son of Wrecking Crew lead guitarist Tommy Tedesco who eventually succumbed to cancer. This film is a worthy tribute to the Wrecking Crew as well as Tommy Tedesco. Denny made the film with the support of his family to tell his dad’s story.

The Wrecking Crew refers to the group of studio musicians who are so talented that they can pick up any song be it jazz, rock and roll, blues or whatever type and play so skillfully that they can be recorded on tracks in a record music studio. They would churn out hits and new songs like 4 new ones very 3 hours. Often they would play and record for famous bands that sometimes would not be even record on their own albums. This was the era beginning the early 60’s.

Director Tedesco is smart enough to know the power of music. He fills the film with a rich soundtrack of The Wrecking Crew’s hits, that are too many to mention. He intersperses the doc with interviews from celebrities that include Cher, Glen Campbell, Dick Cavett including their songs the Crew recorded. The Crew recorded songs from the Beach Boys, Frank Sinatra, Nancy Sinatra, Sonny and Cher, Jan & Dean, The Monkees, Gary Lewis and the Playboys, Mamas and Papas, Tijuana Brass, Ricky Nelson and Johnny Rivers.

But the film concentrates on the different members of the Crew, dealing with them one at a time. Each is given time to have his or her say. Yes, there is one female member in the group - Carol Kaye. The bands the Crew represent also have their say and most of them admire the Crew and are, surprisingly, not against them. The film accounts this to most bands just wanting to get their cut of the money and to do lesser work.

But Tedesco only presents the positive side of the Crew. The film is obviously biased and understandably so. But the absence of negativity is a glaring one and one wishes the film would have addressed these to offer some balance to the film.

Tedesco is quick to point out that the era of the Wrecking Crew has faded. Especially with the arrival of the singer/songwriter. But the Wrecking Crew has had its day though it took quite a while to tell their story. The film is similar in a way to last year’s Oscar winning documentary 20 FEET FROM STARDOM about backup singers. Though smaller in budget that 20 FEET, THE WRECKING CREW is a more intimate, personal and enlightening film. Even if the material runs over ones head, the familiar tunes from the 60’s to the 80’s (including TV series soundtracks like Bonanza, Green Acres and Hawaii-Five-0) is sufficient to get one whistling in the aisles.

Though his film has rough edges with Denny Tedesco first time directing, this is a film that should be seen by the music industry as well as by all those who love music, at least to give credit to these musicians for their work. The Wrecking Crew is also the subject of the book by Ken Hartman that came out this year.

Comedy : What We Do in the Shadows