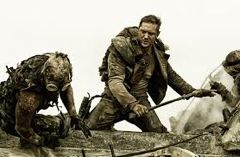 One wonders the choice of the title DANCING ARABS for this autobiographical tale by Sayed Kashuawho wrote the novel and adapted it into the script for the film directed by Riklis (THE SYRIAN BRIDE, LEMON TREE). The only one scene of dancing Arabs occur on a rooftop when they celebrate Suddam Hussein’s bombing to free Iraq, a support for Muslim solidarity.

The well-intentioned film, a sort of coming-of-age story tries its best to show the possibility of peaceful residing of both Jews and Arabs or Israelis and Palestinians. The story’s setting is the Arab village of Tira, the protagonist Eyad’s hometown. Eyad is shown both as a boy (Razi Gabareen) and a teen (Tawfeek Barbom) as he grows up to begin studies in the most prestigious Jewish school in Jerusalem. Riklis doe not offer a smooth transition between the two actors, a common problem involving films with characters ageing. The audience is suddenly taken aback with the elder actor replaces the boy actor in the title role. A single Arab in a full Jewish community is made worse when he falls in love with a Jewish classmate, Naomi (Danielle Kitzis). The romance poses problems, mainly for the nonacceptance by the older folk, like Noami’s mother. The younger ones, like the classmates are more tolerant. The romance sees Eyad quitting and returning back home to the consternation of his father.

Riklis’ film contains thought provoking scenes like the one in which the father (veteran actor Ali Suliman) admonishes his son for giving up his studies. The father had before being evoked from the University in Jerusalem for political reasons and now working hard as a fruit picker to provide for his son’s education. The audience sees the father’s point of view while putting the boy’s romance and individuality cast aside.

The Arab intolerance is shown in the graffiti around the town and in incidents involving soldiers when Eyad is questioned by Israeli soldiers or when instructed on the usage of gas masks by Palestinian soldiers. But the scene in the club where the racist song is sung to illustrate the oddity of the romance between Jew and Arab is too obvious and overdone. The story also includes a subplot of Eyad looking after a Jewish peer suffering from muscular dystrophy, Yonathan (Michael Moshonv) who provides some insight to the proceedings.

The film contains many other interesting characters, like the mothers of Yonathan, Eyad and Naomi whose characters could be more developed. More screen time could be devoted too, to Eyad’s father who is given only confrontation segments with his son.

What other more important issues that are more important or interesting are eventually put aside for Eyad’s trivial romance. But the story takes a welcome twist at the end with the subplot of Yonathan taking centre stage.

But this is still one of Rikils’ better films, him having created a credible atmosphere of desperate times in a politically volatile place.

The dark documentary on H.R. Giger is a free flowing one, illustrating the work and life of the artist that garnered world acclaim after winning the Oscar for his work on ALIEN.

If the film moves slowly and does not reveal much on the man, part of the reason is the man himself. Giger was in flailing health when the doc was made, evident by his slow movements whenever he has to move or speak. Thus, the interviews with him present are short so that most of the information is derived from his entourage, who are also interviewed.

But it is not the man alone that is fascinating. It is his work and influenced factors. Director Sallin spends a fair amount of screen time showing his work, including his masks, sculptors at home and also on the set of ALIEN. What is shown on screen is pretty dark and scary just as the unknown is. Giger attributes his dreams and LSD usage to have influenced his work.

If at the end of the documentary, nothing much has been determined about Giger’s family or youth, one can complain that Sallin’s film has missed all these out. But the film is uncompromising in the fact that it does not want to prejudice people’s view of the man. Shot in German and in English.

Director Andrew Niccol and Ethan Hawke re-unite since their hit GATTACA years back, once again targeting the topic of the toll of battle technology on the human soul.  The timely plot involves drones.  Major Tommy Egan (Hawke) is in charge of directing drone strikes in Pakistan while working in an air-conditioned shipping container somewhere in the Nevada desert.  But the best line, "I blew up six Taliban in Pakistan today," Major Egan tells a convenience store clerk. "Now I'm going home to barbecue.” is soon lost in a tale that never has anything new to offer but repetition.  Most of what is expected in a film about troubled soldiers is here - the fits of rage; the bouts of drinking; the distancing from the family and so on.  The film offers no real insight into the problem though it is still troubling to see how easy to blow up human beings with the pressing of a button.  Hawke is also all buffed up for his role.

Aussie director George Miller, now in his 70s reboots his MAD MAX movies after decades with MAD MAX: FURY ROAD, a film that spurned two sequels and defined the anti-hero (Mel Gibson becoming famous in the process as a bad ass actor and human being).

The reboot is again set in a post apocalyptic future of a desert wasteland where petroleum is the needed commodity in which all tribes fight and kill for it. And water. The bad guy is Joe (Hugh Keays-Byrne) ruling his distraught tribe controlling their access to water. Imperator Furiousa (Charlize Theron) steals his brides escaping in a war rig. She meets Max (Tom Hardy) in a vicious fight but they become allies right to the end of the last reel.

What is marvellous about the film is that the story still manages to emerge despite the scant dialogue. There is no silly message but the characters do strive for hope and redemption. This is almost pure cinema where the audience gets everything, in true cinematic form.

The scenes of the various bikes, souped up vehicles and trucks chasing the war rig with warriors dangling on the poles trying to hop on to the rig are nothing short of spectacular. Inventive, scary, exciting and totally awesome! The stunts are for done with real vehicles and men without any silly CGI, according to the reports on the production sets.

This reboot is an American-Australian co-production unlike the original which is totally Aussie. But this film keeps the actors Australian with most speaking with an Aussie accent.

The word ‘mad’ never comes into the dialogue but the meaning is evident throughout the film, embedded in Max’s character. He looks completely mad (angry) throughout the first third of the film, forced to wear a mask that makes him look like a madman.

Miller’s film is complete action and chase from start to finish - a full 2 hours non-stop. The film’s camera work, atmosphere and look are excellent.

Miller’s name is synonymous with mayhem. His BABE IN THE CITY was so black darkly funny, it angered the financial backers and lost money despite being the most chaotic entertaining family film not for children. His first MAD MAX had the villain saw off his limb in order to survive and his American debut THE WITCHES OF EASTWICK was Jack Nicholson’s wildest. Miller has lived to his reputation with this reboot, though a reboot is hardly the correct term for this film. Though set in similar territory, the story, if it has one is radically different. And there is his expected mayhem all the way from start to finish. A cinematic treat of violence, blood and gore and of course, mayhem.

Compared to the original, FURY ROAD has achieved director Miller’s vision of heightened mayhem of his dystopian future. It is not a future one wishes for, but it makes great entertainment and a visual classic. Clearly, the best serious action film of 2015!

WET BUM is a rare piece of work that deals on a pre-teen’s (she is 14) relationship with two aged seniors. Writer/director Lindsay MacKay has developed a thoughtful, slow moving but compelling piece that is full of heart and emotional drama.

Sam (2014 TIFF Rising Star Julia Sarah Stone) has two things on her plate. She is working for her mother (Leah Pinsent) while taking swimming classes to improve herself. At work, she develops a relationship with two residents, the silent Judith (Diana Leblanc) and the boisterous Ed (Kenneth Welsh). Ed rants non-stop. Meanwhile, her swimming instructor is hitting on her, good for her as her classmates are bullying her. The atmosphere of an Ontario small town is well captured in both the story and looks. Once Sam is in a car and drives off, she is out of the town in the country.

Though MacKay’s film moves slowly, she tells a clear story with a clear goal in mind. The result is a film with a strong narrative with no loose ends.

Comedy : What We Do in the Shadows

Best documentary: Going Clear: Scientology and the Prison of Belief