Here are the best films of the 40th Anniversary edition of the Toronto International Film Festival from the different perspectives of the audience, the critics and of course myself.

On the whole, this has been the average year, with excellent films and some bad ones, with no  clear masterpieces or classics.  It was quite disappointing at first as I trudged along the viewing of my first 50 films before the surprises started to pop up.  Of the grand total of 72 films seen by me in its entirety this year, here are the 10 best,with the capsule reviews of the top three.

A war movie where there is not one battle scene, and yet, one of the best war films, and one of the best films at TIFF I have seen so far.  Set after the 5-year German Occupation in Denmark in 1945, 14 German POWs, mostly young boys are sent to diffuse 4500 German land mines on the west coast of Denmark.  This means 6 mines diffused per hour and the boys might get to go home in 3 months, if they are not blown up.  The film is based on true events.  The Danish Captain tells them that they have to do their job and they will not be welcomed by the Danes.  The sergeant in charge of the boys hates them and treats them like dirt, but eventually lets his compassion rule.   Of the 14, only 4 end up surviving.  The film is as tense as the classic film about explosives, Georges-Henri Clouzot’s THE WAGES OF FEAR (LE SALAIRE DE LA PEUR).  When the boys diffuse the mines, director Zandvlite makes full use of sound, editing and camera to elicit edge of the seat suspense.  The film is guaranteed to make the audience jump out of their seats - and more than once.  LAND OF MINE is a riveting and unforgettable anti-war film mainly because Zandvliet questions the hardness of heart of human beings.  A must-see!  But warning - too intense for the faint hearted.

KEEPER is a coming-of-age story of a teen Maxime (Kacey Mottet Klein) maturing from his girlfriend, Mélanie (Galatea Bellugi)’s pregnancy.   Maxime, a budding football star, is torn between his dream of playing professionally and his unexpected desire to be a father.  Mélanie is the daughter of a single woman.  They want to keep the baby but are pulled in different directions by their parents, their own ambitions and their desire to be normal teenagers.  Senez’s film works because he is able to express visually the points-of-view of his characters with great clarity.  Take the films two best scenes.  In the ultrasound segment when the teens are shown the baby in the womb by the technician moving the probe on Mel’s swelled belly, the camera never once shows the image of the baby.  The expressions of both teens as well as the spectacled technical are more important and the film gets maximum effect from the scene without the image of the baby.  The other is the confrontation segment with the teens and parents of both, all arguing on what to do with the pregnancy.  The audience is shown all points-of-view while still focusing on the boy as the main character.  There are much, much more to be ecstatic for in watching this new director at work.  Senez’s direction, the sensitive yet powerful script by Senez and David Lambert coupled with the riveting performances of the two teens all make KEEPER an unforgettable piece and one of the two best films I have seen at TIFF.  Senez is a power director to be reckoned with and I will look forward to his next work. 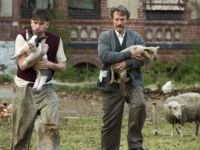 This one gets the first prize for being the weirdest, most absurd, eccentric and funny movie of the festival.  When two brothers Gabriel (David Dencik) and Elias (Mads Mikkelsen) reunite to lay their father to rest, they're confronted with an unsettling bit of news: that they were actually sired by someone they've never met.   They travel to the island of Ork to meet their real father where they discover other siblings.  One can tell as they all sport a hairlip.  The siblings, fight, share bedtime stories, try to get girls and do weirder and weirder stuff that includes bestiality and other nastiness.   Turns out too that their real father has been dead in his room for months and has been conducting experiments mating men with chickens (hence the film title) and other assorted farm animals.  Total sanity but not for the weak-hearted!

8.Every Thing Will Be Fine

The short film awards below were selected by a jury comprised of the head of the shorts program and creations unit at Canal+ France, Pascale Faure, film writer John Anderson (The Wall Street Journal, The New York Times), and actor Rizwan Manji (Outsourced, The

The Shorts Cuts Award for Best Canadian Short Film goes to Patrice Laliberté for Overpass. The jury remarked, “For its seductive, elliptical and graceful manner of exploring the nature of grief and the unconventional ways that families react to loss, all of which was elevated by the performance of Téo Vachon Sincennes.” The award offers a $10,000 cash prize.

The jury gave an honourable mention to Sol Friedman’s Bacon & God’s Wrath, “For its whimsical and wry examination of religious conviction and intellectual conversion, and the acknowledgment that courage and transformation can be achieved at any age and involve any manner of pork by-product.”

The Short Cuts Award for Best Short Film goes to Maïmouna Doucouré’s Maman(s). The jury remarked, “For its daring and revelatory exploration of a family's dysfunction and upheaval through the eyes of a child and its refusal to cast characters as villains but rather as complex, and highly conflicted, human beings the jury selects Maman(s). The jury also wanted to acknowledge the vulnerable, defiant performance of the gifted Sokhna Diallo.” The award offers a $10,000 cash prize.

The jury gave an honourable mention to Fyzal Boulifa’s Rate Me, “For its blithely unconventional approach to new media and new mores, and a sense of humour as wry as it was rude.”

The City of Toronto Award for Best Canadian First Feature Film goes to for Andrew Cividino’s Sleeping Giant. The jury remarked, “For its sophisticated plotting, indelible characters and insightful critique of masculinity through a fateful rite of passage on the north shore of Lake Superior, the jury selects Sleeping Giant.” This award carries a cash prize of $15,000, made possible by the City ofToronto.

The Canada Goose Award for Best Canadian Feature Film goes to Stephen Dunn’s Closet Monster. The jury remarked, “For its confidence and invention in tackling the pain and yearning of the first love and coming of age of a young gay man in Newfoundland, the jury recognizes the remarkable artistry and vision of first-time feature director Stephen Dunn for Closet Monster.” This award carries a cash prize of $30,000 and a custom award, sponsored by Canada Goose.

The jury gave an honourable mention to Philippe Falardeau’s My Internship in Canada, “For its dexterous intelligence and cinematic wit.”

THE PRIZES OF THE INTERNATIONAL FEDERATION OF FILM CRITICS (FIPRESCI PRIZES)

Prize of the International Federation of Film Critics (FIPRESCI) for the Discovery programme is awarded to Marko Škop for Eva Nová. The jury remarked, “For exploring themes of humanity, dignity, addiction and redemption in a naturalistic, deceptively simple and non-exploitative manner, FIPRESCI is pleased to present the prize in the Discovery programme to Marko Škop's haunting debut feature Eva Nová.”

Prize of the International Federation of Film Critics (FIPRESCI) for Special Presentations is awarded to Jonás Cuarón’s Desierto. The jury remarked, "For using pure cinema to create a strong physical sensation of being trapped in a vast space and hunted down by hatred in its most primal form, FIPRESCI presents the prize in the Special Presentations programme to Desierto by

As selected by a jury from the Network for the Promotion of Asian Cinema for the 4th consecutive year, the NETPAC Award for World or International Asian Film Premiere goes to Sion Sono for The Whispering Star. Jury members include jury chairperson Anne Misawa (USA), Heather Keung (Canada), and Nashen Moodley (Australia). The jury remarked, “For its poetic, moving and brave attempt to express a grief that's inexpressible, combining all too real elements with lo-fi sci-fi, the NETPAC jury awards the prize to The Whispering Star.”

This is the inaugural year for Platform, the Festival’s new juried programme that champions director’s cinema from around the world.

The Festival welcomed an international jury composed of acclaimed filmmakers Jia Zhang-ke, Claire Denis and Agnieszka Holland, who awarded the first ever Toronto Platform Prize to Alan Zweig for HURT. The jury remarked, "Following a long discussion, the jury has chosen unanimously to give the Platform prize to HURT. It is a film that explores the complexity and fragility of human destiny in a country that much of the world sees as a paradise." The award offers a $25,000 cash prize and a custom award.

The jury gave honourable mentions to Gabriel Mascaro’s Neon Bull, He Ping’s The Promised Land, and Pablo Trapero’s The Clan.

People’s Choice Award. This year’s award goes to Lenny Abrahamson for Room. Told through the eyes of five-year-old-Jack, Room is a thrilling and emotional tale that celebrates the resilience and power of the human spirit. To Jack, the Room is the world… it's where he was born, where he and his Ma eat and sleep and play and learn. But while it's home to Jack, to Ma it's a prison.  Through her fierce love for her son, Ma has managed to create a childhood for him in their 10-by-10-foot space. But as Jack's curiosity is building alongside Ma's own desperation — she knows that Room cannot contain either indefinitely. The award offers a $15,000

cash prize and custom award, sponsored by Grolsch. The second runner up is Tom McCarthy’s Spotlight. The first runner up is Pan Nalin’s Angry Indian Goddesses.

The Grolsch People’s Choice Midnight Madness Award goes to Ilya Naishuller for Hardcore. Resurrected with no recollection of his past, a cyborg named Henry and his ally Jimmy must fight through the streets of Moscow in pursuit of Henry’s kidnapped wife, in the world’s first action-adventure film to be entirely shot from the first person perspective. The second runner up is Jeremy Saulnier for Green Room. The first runner up is Todd Strauss-Schulson for The Final Girls.

The Grolsch People’s Choice Documentary Award goes to Evgeny Afineevsky for Winter on Fire: Ukraine's Fight For Freedom. Chronicling events that unfolded over 93 days in 2013 and 2014, the film witnesses the formation of a new civil rights movement in Ukraine. What started as peaceful student demonstrations supporting European integration morphed into a full-fledged

violent revolution calling for the resignation of the nation’s president. The second runner up is Brian D. Johnson’s Al Purdy Was Here. The first runner up is Avi Lewis’s This Changes Everything.

Earlier in the Festival, the winner of the Dropbox Discovery Programme Filmmakers Award was announced. The award went to Adil El Arbi and Bilall Fallah whose film, Black, was presented as part of the Discovery programme. The award carries a $5,000 cash prize along with free Dropbox for Business accounts.

The TIFF Awards section was reproduced from one of TIFF Annoucements for Press.

Other section written by Gilbert Seah