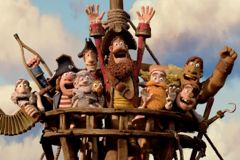 Stop motion animation is an animation technique used as far back as the invention of film.  French pioneer George Melies had used it in moving his title card letters in his early shot films in the early 1900’s.  This is the technique of physically manipulating objects so that they appear to move on their own creating the illusion of movement when the series of frames is played as a continuous sequence.  Dolls with movable joints or clay figures (claymation) are often used in stop motion for their ease of repositioning. But not all stop motion requires figures or models; many stop motion films can involve using humans, household appliances and other things for comedic effect.

One well known animator known as Willis O' Brien.  He was  most admired for his work on KING KNG (1933), a milestone of his films made possible by stop motion animation.  KING KONG will be screened in the series, and capsule reviewed below.

O’Brien’s protege and successor in Hollywood is the well-known Ray Harryhausen.  He is famous for his work in films like MIGHTY JOE YOUNG, JASON AND THE ARGONAUTS and THE 7TH VOYAGE OF SINBAD, all three screened too, in the series.

Clamation has been popularized by the Aardman Studios responsible for WALLACE & GROMIT and films like CHICKEN RUN and PIRATES! BAND OF MISFITS.

Of note too are the films of Czech filmmaker Jan Švankmajer, which mix stop motion and live actors.  These include ALICE, an adaptation of Lewis Carroll's Alice's Adventures in Wonderland, and FAUST, a rendition of the legend of the German scholar.

This series includes as many as 33 features.  Fr the complete program, ticket pricing venue and showtimes, check the TIFF Cinematheque website at:

One of the best fantasy special classics,  THE 7TH VOYAGE OF SINBAD combines the talents of stop motion special effects master Ray Harryhausen, director Natahn Juaran and actor Kerwin Mathews.  This Sinbad escapade bears a lot of similarity to JACK THE GIANT KILER, from the appearance of the cyclops to the island/cave landscape of the two films.  When the film opens, Sinbad (Mathews) and his sailors land on the island of Colossa where there meet an evil magician. Sokurah (Torin Thatcher) who loses his lamp with a genie (Richard Eyer) to the cyclops.  The magician shrinks Sinbad’s princess (Kathryn Grant) to the size of TOM THUMB fooling him to return to the island in order for him to retrieve the lamp.  The film, running less than 90 minutes, is short and ultra efficient with never a dull moment.  Monsters and wonders (2 headed nestling, cyclops, blue serpent, dragon, skeletons, genie etc.) appear at every corner.  Though a little predictable in story and corny at times, it is all good old-fashioned fun, fairy tale style, in which Sinbad and his bride will live happily ever after.   A film good to be seen again and again.  This is the film with the most Harryhausen effects. 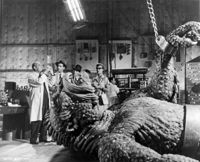 The film director Juaran made before JACK THE GIANT KILLER and JASON AND THE ARGONAUTS, all with stop-motion animation by Oscar Winner Ray Harryhausen, 20 MILLION MILES TO EARTH deals with a monster bright back from Venus by an American rocketship.  When the film opens, two fishermen off Sicily, watch in amazement as the  spaceship pierces the skies and crashes into the sea.  The men, Mondello (Don Orlando) and Verrico (George Khoury), row out to the site and pull two space travelers, one of which is Col. Bob Calder (William Hopper), from the capsized craft.  The monster first in the form of a jelly-like glob is brought to shore and sold by the boy who found it to Dr. Leonardo (Frank Puglia), a visiting zoologist who is studying sea creatures. Meanwhile, Leonardo's medical-student granddaughter Marisa (Joan Taylor) is summoned to town to take care of the injured Calder.   The monster runs loose, looking amazing from Harryhausen’s stop motion effects.  The story is given a boost by the enmity between the Italians who want no one hurt and the Americans who want the creature kept alive for scientific purposes.  A romance develops between Marisa and the Colonel.  The film’s funniest moments include an elephant battling the monster and a typical Italian woman (with a mole on the side of hr face) screaming at the monster.  More like a fairy tale than a horror film, Juaran’s film as like all his others is pure delight for the kids and the young-at-heart.

This sci-fi oldie is exactly as the title implies.  It is EARTH VS. THE FLYING SAUCERS.  When the U.S. sends up rocket ships for exploration, every single one is shot down by aliens in flying saucers.  And these aliens are unfriendly ones, hoping to live on the Planet Earth after their own planet is now destroyed.  The lead character is a doctor , Dr Russell Marvin (Hugh Marlowe) who is newly married who somehow knows exactly why to do to save the world.  In comparison, the wife, Carol (Joan Taylor) has nothing to do but run around looking pretty and be on the doctor’s side.  This is a cheesy little film (people running everywhere screaming with the flying saucers overhead) but at least there are special effects by Master Ray Harryhausen, though they are not that spectacular as in his other works.  The flying saucers and falling debris from the buildings were animated using stop-motion animation. 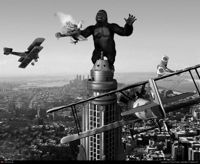 The original KING KONG is a marvel of special effects stop motion animation in the day and even at present  never mind the silly plot and cheesy acting. But Fay Wray can really do a good screaming sequence.   Carl Denham (Bruce Cabot) needs to finish his movie and has the perfect location; Skull Island.   But he still needs to find a leading lady. This 'soon-to-be-unfortunate' soul is Ann Darrow (Far Wray). No one knows what they will encounter on this island and why it is so mysterious, but once they reach it, they will soon find out. Living on this hidden island is a giant gorilla and this beast now has Ann in it's grasps. Carl and Ann's new love, Jack Driscoll (Robert Armstrong) must travel through the jungle looking for Kong and Ann, whilst avoiding all sorts of creatures and beasts.  KING KONG is captured and brought to NYC where he escapes and climbs the Empire State Building with the girl in his hand.  Poor ape is killed and the damsel in distress is rescued by Driscoll.  The film is also racist by today’s  standards and the film contains lots of unintentional funny moments.

The Aardman Studios (CHICKEN RUN, WALLACE AND GROMIT) is famous for their claymation stop-motion features.  This time, the subject is pirates – one that the British know best since they are a nation of the sea.  The protagonist is a luxuriantly bearded (yes, he can keep tons of thingamajigs hidden there) Pirate Captain (Hugh Grant), a more enthusiastic than successful pirate of the high seas. His attempt at pillaging often falls flat, when he fails at various attempts after trying to board ships like a plaque shit, a ghost ship, a kid’s excursion ship and the like.  But what the Pirate Captain has his eyes for is the Pirate of the Year Award.  But he faces impossible odds as his bitter rivals Black Bellamy (Jeremy Piven) and Cutlass Liz (Salma Hayek) have done better.  But he also has to battle the evil Queen Victoria (Imelda Staunton) who wants pirates destroyed from the face of the earth. But the Queen also has eye for the Pirate Captain’s parrot, which in reality is a rare dodo bird, as discovered by Charles Darwin (David Tennant).  Queen Victoria, pirate, Darwin all in one movie? That is quite a concept and a very inventive one at that and obviously with countless possibilities for side plots and hilarity. Director Peter Lord and his crew of animators have done a fine job with lots of high jinx, too many to mention in this review.  This animation works where there is as much happening in the background of a scene as in the foreground. For the kids, the film has goofiness and cuteness, and for the adults the film has goofiness and intelligence.