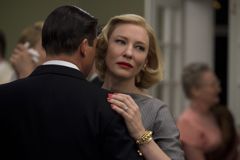 The end of the year arrives with the best 10 lists of everything.  As for films, it is always the same each year.  For the first 11 months of the year - nada.  Almost nothing good is screened and come December, a host of excellent, inventive and entertaining films arrive.  Guess it is Santa’s reward for filmgoers pumping good old fashioned money into the economy.

My best 10 films are listed below (in alphabetical order).

Animated feature about a lone soul (voice of David Thewlis) who finally finds the love of his life.  The entire film is narrated by only three actors because there are only three people in Michael Stone’s life.  Himself,  Anomalisa (Jennifer Jason Leigh) and the rest of the world (Tom Noonan).  A most interesting film about the most boring person on the planet.

A smart, hilarious look at the housing mortgage bubble burst in the U.S. and the few people that benefited from it.  An all-star cast joins in the fun with cameos from Salena Gomez and Robbie Margot who help explain some financial jargon.

The Best Canadian film of the year and another weird and wonderful film by Guy Maddin with co-creator Evan Johnson - and one of Maddin’s best and most structured, which is not saying much.  And the film is in colour instead of black and white.  The film begins, humorously with a man in a bathrobe giving lessons on how to draw a bath.  This vignette is linked to another concerning a submarine crew in dire distress.  The captain is missing and the air supply is running out.  They chew on flapjacks to utilize the oxygen bubbles in the batter.  Does not make sense?  It does not matter.  All this is part of the weird pleasure that is abundant in a Maddin film.

Shit-disturber Tarrantino’s latest film, a western is another winner.  Bounty hunters and an assortment of characters are put up at Minnie’s Haberdashery during a winter blizzard.  They do not come here without a reason.  Chaos ensues.  The film runs 3 hours with a 6-minute longer version in 70mm, complete with overture and intermission.

HOUSEBOUND is my guilty pleasure.  The film came out of nowhere that turns out to be the biggest surprise of the year.  This is the story of story of Kylie Bucknell (Morgana O’Reilly), an ill-tempered delinquent forced to return to the house she grew up in when the court places her on home detention.  Her punishment is made all the more unbearable by the fact she has to live there with her crazed mother Miriam (Rima Te Wiata) - a well- intentioned blabbermouth who's convinced that the house is haunted.   Horror comedy at its best, all neatly explained at the end.

Joy is indeed a great joy!  David O. Russell’s latest family/business drama sees desperate housewife Joy (Jennifer Lawrence) take on the business world with her invention, the miracle mop with the help of her immediate and extended family.  Hilariously satirical at times, this movie belongs to both Russell and Lawrence who delivers the best performance this year.

LEGEND is about the notorious Krays, the gangster twins that terrorized London the 50’s and 60’s.  The Kray twins in LEGEND are both played by Tom Hardy.  Written and directed by Brian Helgeland (L.A. CONFIDENTIAL his best film) and based on the book The Profession of Violence: The Rise and Fall of the Kray Twins by John Pearson, the film is told from the point of view as well as narrated by Frances Shea (Emily Browning) the wife of Reggie Kray, making it part crime and part love story.

A tracker (Leonardo DiCaprio) is mauled by a bear and left for dead by his fellow travellers.  The man survives and after a long track, gets his revenge.  A great wilderness adventure with a very strong performance by DiCaprio, this violent  \film might not be for everyone but it is quite the unforgettable movie.

The most anticipated film of the year lives up to the hype and expectations.  Abrams pumps new blood into the series with characters like Rey, Poe and Finn joining the legendary Star Wars characters Hans Solo, Luke Skywalker and Princess Leia in taking down the Dark Side.  Great special effects, action sequences and musical score add to the the best that this series has to offer.  The Force has awakened and is here to stay!