THE FINEST HOURS opens this week.

Tiff Cinematheque presentations include films by Japanese Seijun Suzuki and Wim Wenders that begin this week.

Following hot on the heels (or rather on the keel) of Ron Howard’s recently released sea adventure, the critically and box-office flop IN THE HEART OF THE SEA, THE FINEST HOURS follows a crew of men fighting the elements, which is just as intense though without a Moby Dick-type monster.  The plus of the two films is the authentic claustrophobic atmosphere in the vessel when the men are sailing, something that will surely discourage those intending to take a cruise some time soon.

The title ‘based on a true story’ immediately flashes on the screen at the film’s start and the film is clear to remind its audience of this fact throughout the film.

The film is a Hollywood account of the daring 1950s rescue mission by the American Coast Guard.  An oil tanker, the Pendleton is split in half by a perfect storm.  The surviving sailors are left adrift with no means of communication exempt to blast the horn.  A member of the nearby community hears the call and a coast guard boat led by the hero, Bernie Webber (Chris Pine) with his crew then risk their lives to find and rescue the sailors.  On the tanker’s side, the hero is the chief engineer, Ray Sybert (Casey Affleck).

Director Gillespie spends too much screen time at the start with the romance between Webber and Miriam (Holliday Grainger).  All this is to emphasize the heroism and sacrifice of both the men and the women by their side.  Gillespie directed LARS AND THE REAL GIRL and therefore uses his past experience in putting in relationships into this film.  As in most Disney films, the money making formula is kept to a ’t’.  Romance, action, a happy ending with good heroic dialogue like: “We are all going home.”  The problem resulting is a too predictable film.  There is one segment in which all power is lost in the town as a result of the storm and the rescue boat, without a compass needs to find land.  I could predict all the cars turning on the headlamps to signal the boat way before that scene occurred.

Once the storm occurs, Gillespie crosscuts between the action in the oil tanker and the action in the Coast Guard boat.  It is a 50-50 division.  What occurs inn the tanker turns out the more interesting, aided by the fact that the script emphasizes problems between Ray and a disagreeable mate (Michael Raymond McTavish) who has his own ideas on survival.  The introduction of a singing cook (Abraham Benrubi) lifts the spirit of an otherwise too serious film.

But one can only endure special effects (not bad ones though) for only so long.

Disney’s THE FINEST HOURS ends up one of the most boring tales of an incredible true mission despite all the enormous effort put in.  THE FINEST HOURS is a tad better than IN THE HEART OF THE SEA but that is not saying much.

Touted as the first Israeli zombie horror film, JERUZALEM (the Z in the word referring to ‘zombie’) takes many lessons from the found footage low budget horror flicks from the U.S.  In fact, the main two characters are American girls travelling to the old city of Jerusalem.  They were supposed to go to Tel Aviv when they get side-tracked by a cutie fellow-traveller to go visit Jerusalem, a decision that they will soon regret.

Sarah Pullman (Danielle Jadelyn) and her best friend, Rachel (Yael Grobglas) are partying it up.  They dance, meet boys, drink, do drugs (not the hard ones) and have sex.  So when they meet cutie, Kevin (Yon Turmarkin), they are easily convinced to go to Jerusalem.  They meet a tour guide, an Arab, Omar (Tom Graziani).

The film begins, seriously enough with a quote from the Book of Jeremiah, Chapter 19 in the Old Testament.  The audience is informed from the text that there are 3 gateways to hell - the ocean, the desert and the third, Jerusalem.  A woman is resurrected from the dead only to sprout winds, then shot.  The first two thirds of the film are free and easy flowing with the zombies and real horror only occurring during the last third.

The first two third sees the two girls touring the city, smoking hashish an having a great time.  The two are quite funny and everything is seen from the point of view of an app on Sarah’s cell phone.  When they enter an underground cave, the words fatal error, or no connection flashes on the screen, as on a cell phone.  This tactic is carried out throughout the film, and is quite funny, despite it being repeatedly used.  As such, the Paz Brothers (Yoav and Doron), who also penned the script appear very tech-savvy with the film obviously aimed at the younger crowd who will go everywhere with their iphone, iPad or laptop.  Everyone seems to be having a hilarious time - the directors, crew and actors and this rubs off on the audience.

When the zombies attack, the film wanes a bit, as the film falls back to familiar horror film territory, which audiences are already too familiar with.  But the Paz Brothers keep it funny.  Rachel gets infected by the zombie virus and is slowly turning into one.  When Sarah sees the wound, she tells Rachel, so as not to alarm her: “It is nothing, it is just a scratch!”  That is probably the film’s funniest line, used again later on.  Another character utters too as they scramble to escape through the underground caves: “Don’t know what’s happening out there, but I hope the good guys are winning!”  And Sarah says: “It’s all a fucking video game!”

The film also offers the audience a good touristy look at Jerusalem, for what is - the old buildings, the market bazaars and the temples.

Despite a few flaws, the Paz Brothers keep their film stylish, hilarious and scary while being smart and entertaining at the same time. 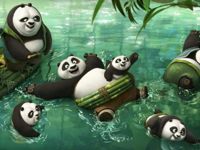 The third of the KUNG FU PANDA animated features provides more of the same.  However, being family fun entertainment, critics should not be too hard on the filmmakers.  As long as KUNG FU PANDA delivers a safe product, everyone especially a less discerning audience should not complain.

The first one in the series that is a Chinese co-production, Fox obviously has an eye for the large Chinese market.  There is a Chinese version with Chinese dubbed voices.  The previous two films grossed more than $600 million each and this $120 million production should beat those records.  To be super safe, the script by Jonathan Aibel and Glenn Berger have added many more pandas into the film - in the form of a secret panda sanctuary.

Po finally gets to meet his real biological father in this film.  The segment of their meeting, as shown in a promotional clip before is the funniest of the film.  Of course, his adoptive father, Mr. Ping (James Hong) the goose who wants to open his own dumpling stall is incredibly jealous.  Po is brought to a Panda sanitary where he trains panda students in martial-arts.  Po also meets Mei Mei, an overly eager panda, who had been promised to Po through an arranged marriage when they were children.   But the main plot involves an evil ancient supernatural spirit called Kai begins terrorizing China and stealing the powers of defeated kung fu masters.  Now in the face of incredible odds, Po must learn to train the village of clumsy, fun-loving pandas to become a band of Kung Fu Pandas.

Added to the film are new characters like Po’s (Jack Black) biological father, Li Shan (Bryan Cranston) and Mei Mei (a brilliant Kate Hudson), a female panda who has the hots for Po.  Hudson does a marvellous job resulting in the audience wanting to see more of Mei Mei.  The villain of the piece is Kai (Oscar winning J.J. Simmons) who adds a some humour to his role.  His voice is easily recognized from the low tones.  The usually Po gang is still present.  So, for those KUNG FU PANDA fans, Viper (Lucy Liu), Mantis (Seth Rogen), Monkey (Jackie Chan), Crane (David Cross) and even Shifu (Dustin Hoffman) are back.

The climatic fight between Po and Kai is ok but nothing too exciting nor out of the ordinary.  But the antics of Po is enough to entertain despite the relatively weak plot.

The Chinese influence in this entry is clearly evident.  There is more oriental folklore, more oriental colours and more oriental architectural drawings.  This entry is also the most colourful of the three with the animation at its peak.  The ‘Kung Fu Fighting’ song is also given a Chinese slant.  Hans Zimmer hits with the overall musical score.

KUNG FU PANDA 3 should be a big hit.  At the end of the promo screening, kids can be seen in front of the screen imitating the martial-arts moves of their hero, Po.