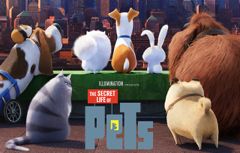 Opening this week are THE SECRET LIFE OF PETS nad MIKE AND DAVE NEED WEDDING DATES.  TIFF Cnematheque presents a fantastic series of Truffaut and Hitchcok films that starts this week.

OUT OF PRINT celebrates the repertory cinema.  This is a film that older cineastes can relate to as repertory cinemas were common back in the days.  Now with film streaming, VOD and DVDs, the repertory cinema is a dying breed.  For myself, my love for movies grew with the rep cinema 10 minutes walk from my home in Singapore.  The program changes every day, which allowed me to see a lot of films while around the age of 12, when not allowed to take the bus alone to go to the city centre.  Also, immigrating to Toronto, the festival rep cinemas allowed me to catch up on all the oldies, foreign films and classics that I was unable to see in Singapore.  And the price was always right.

At the start of the film, director Kevin Smith (DOGMA, CLERKS) says that if you can watch a film on your phone, then you should not be watching this film.  Quite so true.

OUT OF PRINT concentrates on just one such cinema that exists in L.A. called the New Beverly.

OUT OF PRINT is a doc that, despite the fact that I really wanted to like it, does not do much.  It picks on a couple of topics.  Topics like the advantages of watching a movie in a theatre with a full house compared to alone in a house; the dedication of the New Beverly staff; the eccentricity of projectionists and the history of the owners are examined.  Cameos from famous actors and directors like John Landis, Kevin Smith, Clu Galager, Seth Green, Rian Johnson, Edgar Wright are then given a few sentences to speak on each topic.  The reactions are sometime repeated.  But nothing new is learnt or insight given regarding the subject, unless one has been living in a cave for the past few years.  The only time the film gets interesting is when it goes into the mechanics of how an image is projected on the big screen using the projector.  Other than that, it is the rep staff praising themselves or the talking heads trying to be smart or funny.  Unfortunately they are not that smart nor funny.

The film finally delves into something more current - the arrival of digital cinema.  But Marchese ends up turning the subject into sentimental nostalgia.

It is only during the last 20 minutes that the film compares other rep cinemas around the U.S. and outside the U.S.   Director Marchsese spends quite a bit of time on the Prince Charles in Cinema at Leceister Square, London.  I remember watching films there for 1.99 quid.  Ironically I saw Richard Kelly's (one of the directors spotlighted in this doc) DONNIE DARKO there.

Despite the impressive list of cameos, OUT OF PRINT becomes tedious quite fast.  Nothing is also sad of what the New Beverly is at the present time.  The last thing said in the film was that it bought over by Quentin Tarrantino. It is also surprising Tarrantini was not interviewed  for this film.

Based on the 2003 stage play by Reg Cribb, LAST CAB TO DARWIN is the story of a cab driver, Rex (Michael Caton). Rex who is diagnosed with stomach cancer, drives thousands of miles to Darwin in the Northern Territories where euthanasia is just legalized in order to to die with dignity.  Rex is an unsavoury character and leaves behind the only woman Polly (Ningali Lawford-Wolf) who loves him.

This is the kind of subject that audiences turn away from.  This might be the reason the film was hardly noticed when premiering at last year’s Toronto International Film Festival.  The characters in Australian films are often harsh and crude, the landscape bleak and racism existent.  But surprisingly, this film ends up a totally winning film at the end.

The film is basically a road trip.  Rex drives off to Darwin, meeting other people on the way.

One of these people is Tilly.  The film relies on the relationship of Rex and Aborigine Tilly.  Both have led problematic lives and are reluctant to change.  In a key scene Rex tells Tilly: “I don’t tell you how to lead your life and you don’t tell me how to lead mine!”  But Tilly affects Rex’s life and vice versa.  A lasting and precious friendship develops between the two.

Actor Michael Caton carries the film confidently on his shoulders, apt at conveying sympathy in a character hardened by life.  He is without family and friends with no will to live.  Those who recognize Caton will remember him in one of the funniest Australian low budget hit of all time, THE CASTLE.   His role is similar to that of the one in THE CASTLE, an underdog fighting the big guys.  In THE CASTLE, he fights the authorities who want to buy his home (a man’s home is his castle) to put in an airport runway.  In this film he is fighting for the right to die.  The federal government and church will do their all to prevent this as to allow it would be to give power to the common man.  The film’s story thus takes on greater proportions.  Director Simms keeps the tale of Rex intriguing from start to end.

The film contains a relevant message on euthanasia.  Though a little predictable at the end, Simms’ film unfortunately tends to be too sentimental.  The story also appears desperate in trying to get a happy ending, though happy endings are not always possible in some stories.

For a film with the theme on death, LAST CAB TO DARWIN is surprisingly full of life.  It is occasionally a feel good movie.  When I was in Sydney during Christmas when the home video of THE CASTLE was released, I could not rent a copy as all the copies were out in all the video stores. in Sydney.  Quite unbelievable!  LAST CAB TO DARWIN will not likely share the same success as THE CASTLE, but it comes pretty close as an unforgettable movie.

What do pets do after their human owners leave for work?  The imagination of the writers

Cinco Paul , Ken Daurio and Brian Lynch entertain audiences with the notion.  The story follows the adventures of one male pup, Max (Louis C.K.) who leads a sheltered and spoilt life with his owner Katie (Ellie Kemper).  Max hangs out with other pets like Chloe (Lake Bell), Mel (Bobby Moynihan), Buddy (Hannibal Buress), and Sweet Pea (Tara Strong).   Trouble soon arrives in paradise.  One day, Katie adopts a giant dog called Duke (Eric Stonestreet) who Max does not get along with.  But when they get lost and encounter both animal control and an evil rabbit, Snowball (Kevin Hart), they are forced to join forces.  Animated features usually have a story involving saving the world like the DESPICABLE ME movies.  This one has the pets trying to return home.

It is half way through watching THE SECRET LIFE OF PETS that it suddenly dawns that a good chunk of the storyline is derived from Pixar’s TOY STORY.  Just as Andy has his favourite toy, cowboy Woody, Katie has her favourite pet dog Max.  Just as Woody finds his toy universe shaken by the arrival of new toy Buzz Lighyear, Max finds his comfortable world undermined by the rival dog, Duke that Katie brings home.  But that is not all.   The toys speak and move when the humans are away just as the pets speak in their secret life of their own.  But the filmmakers are clever enough not to call their film PET STORY and to take the storyline on step further.  The toys can never match the antics of pets.  The fact that millions watch cat antics on youtube is proof of the fact.

The cuteness factor is high and the cuteness can get a bit annoying at times.  The trailer displayed lots of it.  But most of what is seen in the trailer is finished off in the film’s first 10 minutes.  But the cuten antics are occasionally very funny and work well when used sparingly.

The voice characterizations are lively, working well with the creatures created.  Standing out is Steve Coogan’s Oz, the alley cat and Kevin Hart’s Snowball.  The name Snowball was likely taken from the name of the pig that led the revolt against human beings in George Orwell’s ANIMAL FARM.

The music by Oscar winning French composer Alexandre Desplat (THE GRAND BUDAPeST HOTEL) is a big bonus.  Two catchy songs “Welcome to New York” by Taylor Swift and “Lovely Day” by Bill Withers can heard at the beginning and end of the film respectively.

As the film is made by Illumination Enetertainment, responsible for the DESPICABLE ME films, the studio is quick to remind audiences of the fact.  A Minion animated short Minions is featured before the film.  The Pharrell Williams Oscar winning “Happy” is heard as a cameo song on the radio of a cab that passes by the pets.  One of the pets wears a Minion outfit to a costume party.  But one of the funniest sequences has Duke and Max in heaven in a sausage factory where the hundreds of sausages have faces, all the animated sausages looking like orange Minions.

One might compare and the animation of THE SECRET LIFE OF PETS to Disney’s Pixar films.  Still SECRET LIFE has enough merits for it to stand on its own as excellent family entertainment and fun.  If SECRET LIFE spins out a few sequels, no one will complain.