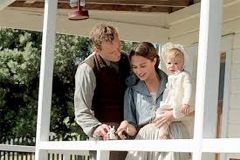 Ths is the very slow time for movie openings, with the Toronto International Film Festival just around the corner.  Only two films opening ths week - THE LIGHT BETWEEN OCEANS and MORGAN.

Based on the recent 2012 best-selling novel of the same name by M.L. Stedman, THE LIGHT BETWEEN THE OCEANS is the lighthouse, around which the period story revolves.

The main character in the story is Tom Sherbourne (Michael Fassbender).  Tom has apparently killed lots of Germans in World War 1 and is surprised that he is still alive, believing that God has given him a second chance in life.  The film should cater to the ‘faith’ crowd, whose market has been quite lucrative lately.  When the film opens, Tom successfully lands a contract to work as a lighthouse keeper.  He and his wife Isabel (Alicia Vikander) are living off the coast in Western Australia.  But their perfect marriage is marred by two miscarriages, so that Isabel is desperate in having a baby.  One day, the couple rescue a baby girl who has washed up on an adrift rowboat and decide to informally adopt her as their own, whom they name Lucy. But as Lucy grows older, Tom and Isabel discover the consequences of raising the child when a visit to the mainland and an encounter with a particular woman (Rachel Weisz) threatens to break apart their blissfully happy family.  This woman is Lucy’s real mother.

Apart from the location setting of the novel, one wonders what impressed the studios to be interested in the material.  The story, though ideal for a romantic drama, has too many coincidences to be believable.  The characters of the novel all go to extremes in behaviour.  Tom is super stoic, Isabel is too extreme in wanting a husband and a baby while Hannah is too forgiving and moody.  Then there is the fact that a baby conveniently shows up when the couple wants one.

Cianfrance’s film is extremely slow and the word ‘ponderous’ is the perfect word to describe the film.  Being able to look wooden appears to be the pre-requisite for acting in this film.  The last few scenes with Fassbender involves him sitting very still, with no movement of his facial muscles and staring out into the open. When visited by his long lost ‘daughter’, he seems to be in another world of his own.  This is Fassbender’s  most stoic performance of his career.

It does not help either that Cianfracne’s film runs for more than 2 hours.  His other drama, the smaller budget BLUE VALENTINE was never this slow.

As expected for a period piece set in a remote area near the end of the world, THE LIGHT BETWEEN OCEANS is a handsomely mounted film, especially the segments where the lighthouse can be seen amidst the landscape of ocean and rocky outcrop.  The film was shot in and around New Zealand as well as in the island of Tasmania.  If there is anything the film should be seen for, it is the cinematography by Adam Arkapaw.

MORGAN is the new sci-fi thriller not to be confused with the 1966 British comedy by Karel Reisz also called MORGAN or in full : MORGAN: A SUITABLE CASE FOR TREATMENT.  The Morgan in the new film is also another case for treatment being a female created by a group of scientists.

MORGAN (Anya Taylor-Joy) is not like any other girl.  Created and raised in a laboratory environment by a group of over-dedicated scientists, she defies nature with her super-human qualities.  But do not push her beyond the limit!  Walking and talking within one month and self-sufficient after just six, her rapid progression is remarkable, exceeding the expectations of her creators.  But nothing ever goes as well as planned.  There is a vicious accident.  After Morgan has a "tantrum" in which she viciously attacks and injures one of the scientists (Jennifer Jason Leigh taking as much abuse here as she did in Tarantino’s THE HATEFUL EIGHT), corporate troubleshooter Lee Weathers (Kate Mara) is called in to make the ultimate choice of "terminating" Morgan or letting her live before she causes anymore havoc and escapes into the outside world.  Her decision is to terminate Morgan but the scientists protect Morgan.

The script by Seth Owen and direction by Luke Scott is tight and well paced during the first two thirds of the film.  The film is always one step ahead of what is revealed to the audience and this is where the film works best.  No one knows what to expect - except for the last third of the film.   An excellent cameo from Paul Giamatti helps spice up the tension. The inclusion of Michelle Yeoh and Toby Jones in the ensemble cast also adds to the excitement of the film.  A neat segment involving Mandarin dialogue (Michele Yeoh is Malaysian Chinese) also works well.

For a film written and directed by males, it is interesting to see how females are depicted.  They are either strong and forceful as in Weather’s character or a crying quivering mess as in Dr, Amy Menser (Rose Leslie), Morgan’s friend.  The females are all sexy looking in different forms - fighting, vulnerable or smart.  The eye candy for the female audience is provide by hunk Boyd Holbrook playing another doctor, who makes an unsuccessful pass at Weathers.

It is only in the last 15 minutes that the film starts to fall apart.  Once Lee starts fighting Morgan and ends up indestructible, it becomes an easy guess to the twist in the story.  It does not take a gnus to figure things out.  That is when all the mystery and intrigue are lost in predictability.

Given the story’s limited potential, it has to be taken it to a predictable conclusion.  Director Scott fares pretty well with the material.  MORGAN is absorbing for the most part and provides sufficient thrills for the typical sci-fi thriller.  The film has a beautiful setting, where the scientific facility is located, the film being shot in Northern Ireland.

MORGAN is up for stiff competition a week opening after DON’T BREATHE which caters for the same male target audience.  Given its differentiation from a horror flick, MORGAN should do well enough at the box-office.