short films and a round table discussion

The 2016 edition of the festival will take place November 10 to 24 at the Royal Cinema euffto.com

TORONTO - The European Union Film Festival (EUFF) is thrilled to announce that for 2016 it’s venturing into new programming territory. In addition to showing 28 feature films from each of the 28 EU member countries, this year EUFF will include a round table discussion with award-winning filmmakers from the region, be part of two cinema-focused exhibitions, and showcase a selection of short films, all firsts for the Festival.

On November 12, during the EUFF’s first weekend, audiences will be able to enjoy a round table discussion on what makes a film European. Participants include Greek film industry veteran and founding member of the Hellenic Film Academy Panos Karkanevatos, the Netherlands’ multi-award-winning director Joram Lürsen, who has received both critical acclaim and great box office success with his films, and German-born, Montreal-based filmmaker Wiebke von Carolsfeld, best known for her feature Marion Bridge, which introduced a very young Ellen Page. Her latest, The Saver, has already earned her countless international nominations and will be distributed in the US in the winter.

Opening on November 16 at the Alliance Française de Toronto, the exhibition CINEMA FACES will showcase the work of Toronto-based photographer Jean-Baptiste Le Mercier, whose portrait sessions at TIFF captured the highlights of the presence of French cinema at the Festival. It will run until December 16, 2016.

Showcasing short films for the first time at the Festival, EUFF will be showing six student shorts from the EU, each screening in front of a feature. The titles and pairings for this selection will be announced with the Festival's full film line-up on October 13.

About the European Union Film Festival 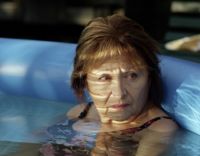 EVA NOVA is the closing night film for the EUFF.  The film title is also the name of the protagonist of Marko Skop’s film of redemption.   Eva was at the peak of her career as an actress when her drinking caused a downward spiral in both her family life and career. Now, at the age of 62, she is dead set on staying sober and determined to reconcile with those whose confidence she lost during the worst years of her addiction.  More than anything else, she wants to regain the love of the person she values most in life, her son Dodo.  At one point in the film, Eva complains about young directors not having enough emotion in their films.  Well, there are lots of emotion in this film, that’s for sure, particularly Eva’s.  Emília Vásáryová delivers an impressive performance as the distraught Eva.

A weird documentary about the wilderness nomadic people in Finland called Skots, the film traces the tales told to the protagonist Robert Crottet (1908-1987) by an old Skots lady called Kaisa.  One of her fairly tale sessions is enough to fill two books.  The film is shot partly in black and white with grainy scratches, reminiscent of the typical Guy Maddin film.  And just as odd too.  An additional bonus is the animation added into the storytelling.  The film is a period piece that spans the second world war and celebrates land and nature.  It also pays homage to the first settlers in Finland, displaying their way of life in term of reading reindeer, cooking and storytelling.  Never mind the loose narrative - just sit back and enjoy the story telling and wonderful black and white cinematography.  The director is Kaisa’s great grandson

This Dutch period piece that celebrates the toil of the poor Dutch people who stand for their principles is the perfect selection for the opening film at the European Union Film Festival.  There are several stories on display, the main one being the building of the historic Victorian Hotel near the new Central Station in Amsterdam.  Old Vedder has to step aside and sell his shop making violins as it is part of the site of the planned Victoria Hotel.   Meanwhile, his cousin Anijs, pharmacist, has gotten into a fix after illegal medical practices and is looking for a way out.  For himself and his wife but also for some peat cutters whom he promises a future in the United States.   Vedder is to use the sale of his shop to finance the emigrants.  But he is too stubborn to come down in the price with the result that the Hotel builders decide to build around his who instead.  The film is quite a downer with hopelessness always in the atmosphere, despite the tacked unhappy ending.  I checked the history of the Victoria Hotel and it says that the hotel built around two ships that the owners of the hotel could to agree with.

WHILE AYA WAS SLEEPING (Bulgaria 2015) **
Directed by Tsvetodar Markov

Seven year old Aya spends a lot of time in the theatre because her father, Asen, is an actor.   One night Aya falls asleep in the control room.  After the end of the show, intrigue, betrayal and tension in the theatre group gradually escalate all of which occur WHILE AYA WAS ASLEEP.  Asen’s illusions collapse, when he finds out that the television star, Boyan, will replace him in an upcoming premiere. Aya’s father provokes a scandal, which turns into a drunken brawl.  Will Asen succeed to rediscover himself with the unreserved support of his wife and the selfless love of his daughter?  It does not help that Ansen is depicted as a drunken hopeless has-been.  The film clearly wants the audience to side with him, but unfortunately the film does not do him justice with no redeeming qualities.  A sad, boring film about the ins and outs of theatre life that no one really cares for.  The climax of the brawl is funny but not enough to save the movie.