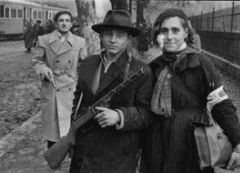 and honours its Canadian connection at the

Featuring a number of special appearances including internationally acclaimed pianist János Balázs, and Award-Winning Producer Robert Lantos, who will be presented with Hungary’s state honour.

Tickets can be requested in advance by calling

As part of a cross-Canada program of cultural events marking Hungary’s 1956 revolution, the Hungarian Consulate presents the Freedom First – Hungary 1956 Film Festival featuring films about that historic Revolution. The uprising of October 1956 not only asserted Hungary’s national identity, but represented the first real resistance to the Soviet empire – the 1956 Revolution was the beginning of the end of communism.

The Freedom First – Hungary 1956 Film Festival – from Nov. 17-20 at TIFF Bell Lightbox – is a presentation of films about or themed around the revolution. The selected movies and documentaries show different aspects of how the Freedom Fight directly affected the lives of everyday people, how fear can be part of daily routine, how the desire for freedom can create heroes.

“On behalf of the Consulate General of Hungary in Toronto, we are pleased to be able to give thanks to Canada for accepting the Hungarian refugees after the brutal defeat of the 1956 revolution,” says Stefánia Szabó, Consul General of Hungary. “With our many events over the last few months to honor this anniversary, it is really a rare and special opportunity for us to show these very important, insightful, and emotional films. I hope that many of you will come and take in a film or two, or three, and be inspired by heroes – Freedom First!”

Canada took in 37,565 refugees from the Hungarian uprising, cementing a long-standing relationship between the two countries. Award-winning producer Robert Lantos was one of the refugees who left Hungary as an 8-year old boy, settling first in Uruguay then emigrating to Canada in 1963. He will be on hand at Freedom First – Hungary 1956 for a Q&A following the November 18 screening of his acclaimed film Sunshine (starring Ralph Fiennes and Rachel Weiss) about three generations of a Hungarian Jewish family whose experiences mirror the turmoil around them. Other credits for Mr. Lantos include Oscar and Golden Globe Nominated films, Barney’s Version, Eastern Promises, Being Julia, and The Sweet Hereafter.

On behalf of János Áder, the President of Hungary, Toronto’s Consul General Stefánia Szabó and the Hungarian Ambassador to Canada, H.E. Bálint Ódor will present Mr. Lantos with the Officers Cross of the Hungarian Order of Merit. This award is one of Hungary’s highest state honors.

Directed by Jerry and Bette Thompson

This made for TV CBC documentary details emigration to Canada following the Hungarian Revolution in 1956, including forestry faculty and students from Sopron University Language.  The students were Freedom Fighters on the night of 1956 (hence the film title) that took up arms to fight against the Soviets.   The film traces their plight to Canada, largely to British Columbia where a number of forestry students completed their degrees at UBC.  But this is not without difficulty and prejudice.  If there is one film to be seen during the festival, this is the one.  The doc explains clearly, using archive footage and enactments what happened together with the Hungarians’ assimilation into Canadian society.  Watching the film also makes Canadians SUPER-proud in helping the refugees.

FREEDOM FLIGHT is the true story of a domestic flight hijacking by 3 Hungarian friends in order to defect from commits Hungary.   The three manage to sneak in the weapons on to the flight in a ridiculous airport segment that director Fazakas stages with cliched false alarms.  The hijacking is carried out with fair suspense though it looks quite unbelievable.  Even less believable is the romance between two of the hijackers. Which makes the film all the more interesting that all the events are true.  The musical score is just terrible, the music deciding for the audience how to feel at each moment.  There are some good parts, like the spontaneous debate among the other passengers on the evils of communist Hungary and the landing of the plane when suddenly the other passengers are faced with a life decision on whether to return back to Hungary or to defect.  The Hungarian revolution took place 3 months after the hijacking.  If only the hijackers would have waited and saved all the trouble.

The November 10th, issue of Paris Match in 1956 featured a report on the Hungarian revolution.  The special coverage opened with a photograph taken on October 30 (see photo inset of this photo), on Budapest Múzeum Boulevard.   Forty-five years later, Hungarian historian Eszter Balázs and French journalist Phil Casoar decided to trace down the young couple seen in the picture.   Who are they?   Have they survived the revolution? If yes, is it possible to find them after all these years?  The film follows their search for answers.  It is a very extensive search as the film follows them around the globe from Budapest to Australia where the girl finally got naturalized and married.  The girl turned out to be q freedom fighter by the name of Yutka.  The boy however, did very soon after the photo was take,  The two were just acquaintances.  The film is a person search and director Attila Kékesi has crafted quite the absorbing documentary on youth and innocence lost.