Special Film Review: All Eyez On Me 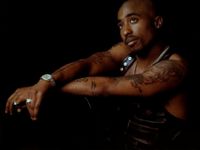 Those in the music industry or interested in hip hop will immediately recognize the title of the film, a biopic on rapper Tupac to also be the name of his most famous album.  The film chronicles his rise to superstardom, his imprisonment and his prolific time at Death Row Records, his record label, working with the Notorious B.I.G.

For a superstar youngster shot and killed in a car shooting at the age of 25, his life story is nothing short of boring.  It is filled with drama, action, romance, danger but most of all music.  Director Benny Boon has created one of the best biopics in recent cinema aided by an award worthy inspirational performance by Demetrius Shipp Jr. in the tile role.

ALL EYEZ ON ME covers a lot of material from the birth of Tupac to his untimely death.  His coming into the world is documented with his mother’s pregnancy while in prison.  While released after acquittal, Leila Steinberg, Tupac’s mother (Lauren Cohan) angrily yells on camera on how unfairly black people are treated and how ‘we will not give up the fight” setting the tone for a very angry and powerful film.

Leila, also shown as a drug user later in the film, is not an easy person to live with.  Tupac is eventually separated from his mother due to her black panther activities.  The film quickly charts the years from 1971, 1975, 1982 to 1987 and 1988 when Tupac moved from the Bronx to Baltimore to Oakland, California where his sudden burst to fame in the Digital Underground is documented with spirit and energy.

Director Boom punctuates his film with an interviews with Tupac played by Shipp  looking like the real thing.   An interview with what follows on screen gives an impression of old footage used (though not so) of Tupac’s life.    It is clear that the film is not a documentary as Tupac is currently dead for more than 20 years.  But this tactic shooting the biography in fake documentary style achieves that rare quality of making the audience feels as if they are really watching a doc on Tupac even though all that occurs on screen are re-enactments.

Tupac’s talent is effectively captured on screen thanks to both Shipp’s great acting and dance/singing mimicking as well as Boom’s well staged musical set pieces, the best of which  include the studio recording of California Dreaming and his shooting of the Digital Undergorund sequences.

Besides Shipp’s outstanding performance, Cohan’s and Jamal Woolard's as Tupac’s mother and the Notorious B.I.G. respectively stand out.

The film also contains moving moments such as in the film’s prison segment when Tupac learns his most important lesson in life while in prison, at a time when he almost gave up on everything.

Boom’s film moves fast and furious, just as the speed of Tupac’s life unfolded.  There is hardly a dull moment n this 2 hour and 40 minute biopic.