This new Cinematheque series showcases post war French Crime classics, may of which are seldom seen.  One of the best films in this series is the newly restored PANIQUE, a 1945 black and white film (remade by Patrice Leconte as MONSIEUR HIRE in 1989) which I got to see for the first time, and must say is the BEST film I have seen this year.

PANIQUE was selected for both the Cannes and New York Film Festivals and was received with critical accolades when it opened at New York’s Film Forum.  The film is capsule reviewed below.  A MUST-SEE!  (Panique screens on Thursday, July 20 at 6:30 p.m.)

French Crime Classics running from July 6 to September 3 is curated by James Quandt, Senior Programmer, TIFF Cinematheque.  There is a total of 25 classic crime films, several in new or restored prints.

Due to time constraints, I am unable to review at this time, all the screeners provided to me by the Cinematheque.  However, more reviews will be added to this article, so please keep checking for more updated reviews.

One of Jeanne Moreau’s early films that director Louis Malle help put on the filmmaking map.  Moreau does a lot of sulking and wandering around the city like a crazed lady when her lover (Marurice Ronet) fails to turn up for the rendezvous after being locked and trapped in an elevator after office hours as a result of a murder they both conspired on.  The victim is the husband and the target the prize money that the two lovers hope to live happily ever after with.  But as stories like these are, nothing goes as planned.  A young couple steal the car and murder two German tourists with Ronet being the prime suspect.  Director Malle fills his suspense thriller with lots of details that aid the story’s authenticity, especially in the segments in which Ronet is trapped in the lift.  The black and white cinematography (by Henri Decae) is superb and aided by an excellent jazz trumpet score by Miles Davis.  A beautifully stunning and entertaining suspense thriller!

Undoubtedly the best suspense murder thriller of all time!  Based on the novel by Pierre Boileau, the film is the typical Hitchcock movie.  It was rumoured that Clouzot bought the rights of the novel just before Hitchcock could, thus infuriating the Master of Suspense.  But Hitchcock could not have made a better film.  Shot in black and white with the word sinister printed on every scene, DIABOLIQUE tells the story of a mistress and wife of a boarding school owner conspiring together to commit the perfect murder.  As one school colleague put it - it is really strange to see the wife comforting her husband’s mistress.  Simone Signoret plays the strong mistress while Vera Clouzot plays the weak hearted wife, both abused physically and mentally by the man they plan to murder.  Of course in stories like these, things never go as planned.  The body goes missing and the plot twists more than once at the end.  Clouzot ‘s film contains some wickedly brilliant moments.  The one in which the wife begins to warn her husband of the poisoned wine he is about to down only to get slapped by him is a classic.  She then quietens to pour him more of the poisoned wine.  Another has her burn the evidence with a match, the light brightening up her face to reveal her reaction.  As the two women leave in the car to drive back to the school with corpse in the boot, the neighbour says casually that the cops are around the major intersections theses days.  One sentence of dialogue such as this one is sufficient to drum up the audience anticipation for the entire car trip.  The atmosphere of the 50’s countryside France, the boarding school and emotional trappings of the two women are all wonderfully created.  DIALBOLIQUE was remade with Sharon Stone and Isabelle Adjani in the 90’s, but some films like this one (and all Hitchcock films) should never be remade.

JUDEX (original creator Louis Feuillade) is a French mysterious hero who punishes evil men like a judge passes sentences.  The plot revolves the evil banker Favraux, receiving a threatening note from Judex (Channing Pollocak) demanding that he pay back people he has swindled.  He is later drugged by Judex and locked away.  But Favraux is not the only villain in the piece.  Meanwhile, the former governess, Diana (Francine Berge) , kidnaps Favraux’s daughter Jacqueline (Edith Scob) to try to get the banker's money.  At the same time, private detective Cocantin (Jacques Jouanneau) bumbles his way (like an Inspector Clouseau) trying to figure out what is going on.  The film is rich in period atmosphere especially in the costume ball segment where JUDEX makes a surprise appearance wearing a costume with the head of a hawk.  The film wonderfully transports the audience into the style of early French cinema.

A film that is seldom seen but should for the many famous names credited to it - among them director Tony Richardson (TOM JONES, THE ENTERTAINER), actress Jeanne Moreau (also seen in ELEVATOR TO THE GALLOWS in this series), gay writer/poet Jean Genet whose story is based from and Marguerite Dumas who wrote the script.  MADEMOISELLE (Moreau) is evil as evil can get.  She is shown breaking eggs in a nest and replacing the squashed eggs in the nest for no reason except to show that she is some psychopath.  She is a school teacher in the village causing havoc by flooding the farms, committing arson and poisoning the farm animals while the villagers blame the Italian woodcutter, Manou, (played by Ettore Manni) for their losses.  The film only hints at the reason she is committing all this evil.  The film plays like a suspense sexual thriller and yes, Jean Moreau is finally seduced by the hot sweaty harry hunk of the Italian.  A weird art film that is by no means boring but fascinating from start to finish. 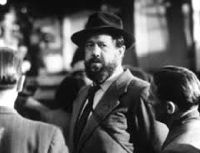 The first film (before Patrice Leconte’s MONSIEUR HIRE with Michel Blanc) based on the novel Les Fiançailles de M. Hire by Georges Simenon, PANIQUE has all the elements of a film classic.  The plot is a beauty and the beast like story with all the villagers at the end of the film lynching who they think is the murderer of a an innocent girl.  After an elderly woman is murdered, the murderer realizes that Monsieur Hire (Michel Simon), a solitary Jewish neighbor on the courtyard where the main characters live, knows who is responsible. The murderer and his girlfriend, Alice (Viviane Romance) manipulate local opinion against Hire, who is ostracized by the community. It does not help that M. Hire falls in lvd with Alice.  He tells Alice his every move, making him more vulnerable to the murderer.  They then plant evidence in Hire's apartment to confirm popular suspicions.  Director Duvivier builds up on the suspicion and mistrust by the villagers on the stranger, criticizing the small French town mentality.  The butcher questions the the preference of his pork chops to be bloody hen M. Hire buys the, and another is suspicious of the gifts M. Hire offers to a little girl.   The town is interested in cheap gossip, tacky entertainment like lady wrestling and taking matters into their own hands.   Beautifully shot in black and white with M. Hire wonderfully performed by Michel Simon, PANIQUE is a thrilling tragedy from start to finish.

One of Truffaut’ more obscure but no less impressive feature, SHOOT THE PIANO PLAYER follows the adventures of a bar’s pianist, Charlie played by French singer Charles Aznavour after his bother runs to him for hiding.  The film is part thriller part romance but it is these little details of the film that creates the charm and magic of this sensitive film.  One scene has Charlie contemplating whether to ask Lena (Marie Dubois) to have a drink or to be more subtile by asking her if she was thirsty.  When he immediately turns to her to utter by mistake, “Let’s go for a drink,” she has already walked off.  The execution of musical numbers like the rendering of “Framboise” also does the trick.  Aznavour is no great actor, by Truffaut milks the charm that has made this singer so famous.   Again, the are lots of shots of women’s sexy long legs here as in Truffaut’s other films especially L’HOMME QUI AIMES LES FEMMES.  I saw the film only once 20 years ago and was not really impressed then, but am now.