Of the list, there are a few that many would have missed or not heard of, the ones I called hidden gems.  Two of these are in the list as marked by asterisks.

The list of films are in order of preference, with short descriptions.  Full reviews of the films can be found at the site;

with the title of the film in the ‘SEARCH’

Made as a Netflix original, ROMA is the stand out film that that has been on many film critic's best 10 lists.  It is also the number 1 film polled by Sight & Sound International Film magazine.  Roma is a suburb in Mexico City where the director grew up.  The film pays tribute to the women who influenced him on as a child.  Like many films made by great directors on their growing up, Francois Truffaut’s 400 BLOWS and Federico Fellini’s AMARCORD, ROMA is Cuaron’s near masterpiece.

Little seen film that won lots of awards in Asia, ANGELS WEAR WHITE proves its excellence on second viewing.  This is writer/director Vivian Qu at her best, with her tense, relevant and powerful film of young female abuse.  The theme is young women under pressure in a corrupt seaside town.  The question in Qu’s excellent study is whether one can hold on to ones dignity in the midst of such over-powering adversity.  The metaphor is the giant Marilyn Monroe statue that is finally taken down at the end of the film.  The only unblemished hero arising from the muck who does not succumb to the corruption and temptation is female attorney Hao (a brilliant portrayal by Shi Ke) whose only reward is the local police chief, himself corrupted, telling her that she has his respect.

The film (in 3-D)was created using original footage of World War I from the Imperial War Museums' archives, most of it previously unseen, alongside audio from BBC and IWM interviews of British servicemen who fought in the conflict.  But the film is clearly not a recounting of events but a revelation of the unforgettable riveting experiences of the common soldier as seen from the eye of the common soldier.  Many were not old enough to be recruited to fight but were passed through the enlistment lines anyway, as the British had a duty to perform.  Jackson’s crew reviewed 600 hours of interviews from 200 veterans, and 100 hours of original film footage to make the film.  But it is not one man’s or a few men’s stories.  It is the story of all the men as the footage covers the all the infantrymen in the front lines of the Western Front.

In a dystopian futuristic Japan, dogs have been quarantined and banished to a remote island due to a "canine flu".  Major Kobayashihas (Kunichi Nomura) who has won the election and has convinced all his voters that this is the best idea.  The all-important question is then posed; “Whatever happened to man’s best friend?”   There is hope for the dogs.  A boy, ironically the major’s nephew, Atari (Koyu Rankin), ventures to the island to search for his dog, Spots (Liev Screiber).  The film is shot in both English and Japanese.  The dogs speak English which English audiences understand while the humans speak Japanese which the dogs (and audiences do not understand).  This is a brilliant concept which is even more brilliant when one considers the reverse effect when Japanese watch the film.  The film is extremely funny with Anderson’s humour mostly tongue-in-cheek.  On originality alone, ISLE OF DOGS scores 100%.

It took 54 years for this sequel but the wait well worth it.  Emily Blunt plays the Julie Andrews character with Dick Van Dyke performing a grand cameo.  Mary Poppins returns to the Banks children now all grown up.  Lots of spoonful sugar sweet songs and musical numbers with lots of magic and wonder thrown in.  Watching the film makes one feels like a child again. 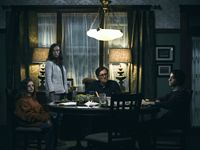 HEREDITARY is a psychological supernatural horror film that has a simple, straight forward premise but unfolds brilliantly in all departments.When Ellen, the matriarch of the Graham family, passes away, her daughter's family begins to unravel cryptic and increasingly terrifying secrets about their ancestry.  “My mother was a very private person.  She wasn’t always there, especially at the end.”  Annie says of her mother at the eulogy.   The more the family discover, the more they find themselves trying to outrun the sinister fate they seem to have inherited.  Toni Collette delivers an Oscar winning performance.  Aster manipulates the audience in wanting to believe that the supernatural exists.  The sense of audience anticipation is brilliantly created, keeping the audience full attention to the proceedings.  Horror films seldom get on the Best 10 film list, HEREDITARY clearly deserves to be.

7. The Ballad of Buster Scruggs (USA 2018) Directed by the Coen Brothers

The Coen Brothers have already twice won the Best Film Oscar with FARGO and NO COUNTRY FOR OLD MEN.  But I personally love their comedies like BURN AFTER READING and this one, an anthology of 6 stories set in the wild west frontier beautifully shot by  their cinematographer.  The common tread is that every one is violent and has a main star in it.  The best of the 6 is the first one starring Tim Blake Nelson as a singing cowboy that will have you falling over with laughter.  Every story is a prized watch.  One can only hope for more.

This surprise mystery sleeper that took Cannes by storm is based on a short story by Haruki Murakami about a young man who grows suspicious about the motives of a deceptive interloper who is hanging around with his childhood friend and love interest.  While jumping from job to job to support himself, Jong-su (Yoo Ah-in) is a sort of country bumpkin.  He runs into Hae-mi (Jun Jong-seo), the childhood friend from his hometown.  The two start to grow fond of each other, and Jon-su wonders if he has found someone he can maybe one day fall in love with.  He looks after her cat when she goes away to Africa but in return finds her changed, arriving with a wealthy stranger, Ben (Steven Yeun).  Ben is likened at one point to THE GREAT GATSBY (Jong-su being a writer), a wealthy mystery man.  Lee’s film stands out for his excellent pacing, attention to detail (audiences  have to be fully attentive) and his creation of mystery and longing around his characters.

GREEN BOOK, the film is named from The Negro Motorist Green Book, a segregation-era road travel guidebook to help African-Americans dealing with racial discrimination issues and Jim Crow laws, such as whites-only garages, restaurants and hotels refusing services.  The film follows the protagonist, Italian, Tony Lip as he takes a difficult new job in order to support his wife, Dolores (Linda Cardellini) and his two kids.  The job is to chauffeur and protect Dr. Shirley as he tours the racial prejudiced deep south.  It is a pretty country but not for the coloured folk there.  It is a simple story but one is both extremely moving and relevant in today’s times.  What makes the film totally winning is that it is a film about discovery, as each of the two main characters Tony and Dr. Shirley learn about each other, the people and ultimately about themselves.  GREEN BOOK also contains Top 10 of the year performances by Viggo Mortensen and Mahershala Ali (MOONLIGHT).  GREEN BOOK won the Toronto International Film Festival’s most coveted prize of the People’s Audience Choice Award.

10. You Were Never Really Here (UK/USA/France 2017)  Directed by Lynne Ramsay

A dramatic thriller written and directed by Lynne Ramsay, based on the novella of the same name by Jonathan Ames, the film follows Joe (Phoenix), a combat veteran and former FBI agent with post-traumatic stress disorder, is a hired gun who rescues trafficked girls.  He cares for his elderly mother in his childhood home in New York City.  Joe has graphic flashbacks to his childhood and past in the military and FBI.   The plot thickens with a lot of people getting violently killed.  This is director Ramsay’s first thriller though death, killing and the psychology of killing has been dealt with in her previous films particularly in WE NEED TO TALK ABOUT KEVIN.   But she treats this film with dead seriousness.   Her fascination with themes of grief, guilt and death is present here as in her other films - a strength in her filmmaking.  YOU WERE NEVER REALLY HERE contains a remarkable ending and a bright one.