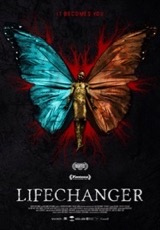 The only film opening on the 28th of December makes one wonder the reason.  For one LIFECHANGER is a Christmas movie, the setting being the yuletide season.  But it is also a killing slasher movie, but quite an original one that Santa has brought in.

The film opens with a woman later known to by Emily Roberts (Elitsa Blko) in bed with a deformed corpse next to her.  The woman is not in a panic or anything.  It seems that she knows what is happening, perhaps maybe even being the one who committed this crime.  Writer/director plays with the audience curiosity by having a voiceover in first person, explaining what is going on.  But the voiceover is a male voice.  The woman, as cool as a cucumber, saws the body in the bathtub, stuffs the pieces in trash bags, and drives the trash bags to a place to burn them.  She visits a diner before returning to her own home, opening the door.  She smokes some pot she evidently knew where was hidden before her boyfriend James (Adam Buller) enters saying that he has called the police after she had not come home for 3 days.

She is next seen setting fire to the house and leaving when a cop enters to see to the matter of the missing person.  It becomes apparent that she has killed the boyfriend now the cop, taking over the cop’s body, thoughts, memories and all.

Director McConnell dishes out little doses of the mystery and story at a time .  It is clear that the voice belongs to the original person.  It turns to from the voice that there is love involved.  The voice confesses falling in love with a woman called Julia (Lora Burke).  The shapeshifter (wonder why the film is not just called that instead of lifechanger) visits Julia at the same bar many occasions in the various personalities he has inhabited.  The shapeshifter in one final desperate move decides to tell Julia the truth, hoping that she will understand.  But this is clearly not unrequited love.  This is what drives the film towards its climax and plot twist (not to be revealed in this review).

LIFECHANGER contains quite the original idea and McConnell plays with it to his benefit.  McConnell does not offer any raison d’être of the shapeshifter’s being and how he got to inherit the sad state of affairs.

The cast is made up of a variety of different actors since the shapeshifter inhabits many characters.  The main one is Julia, played credibly by Burke.  All the actors do well, basically portraying two different people, one before and one after the killing with the same body.  This keeps the performances interesting.

McConnell keeps the ending relatively simple and ‘happy’ while being credible at the same time.  Thus the story is brought to an effective conclusion.  LIFECHANGER is a well thought-of low budget horror mystery set in Toronto that is worth  a look.