Can anyone ever trust the Chinese Government?  Making a film condemning the Chinese Government like the Canadian doc ASK NO QUESTIONS is obviously risky as no one can foresee what they are up to which means that they can exact a terrible retaliation.  The above statement may sound racist, but I am Chinese by race.  So, to be clear, I can get away with saying it.  The film reminds me of the artist Ai Weiwei’s documentary by Alison Klayman AI WAIWEI: NEVER SORRY in which China’s most famous internationalist artist who spoke out against the Chinese Government was eventually kidnapped and re-educated.  When emerged, he had nothing further to say and sadly he seems resigned at having anything else bad to say about the Chinese Government.  Their re-education process is notorious for its ‘effectiveness’ in dealing with dissidents.  If the Chinese can do this to their own people, one can only shudder in horror to think what they would do to their enemies.

The film becomes only too relevant in these times of Covid-19.  President Trump has accused the Chinese of not coming clean with the Corona virus. and he might be correct (as much as I dislike him) on that.  The magic question is whether the world would have benefited if China had come clean, assuming they had not.

ASK NO QUESTIONS is a documentary that employs actors to play the parts of the real victims and people involved.  The cast is comprised of mainly unknowns who are to their credit, quite convincing.

This is the story of Falun Gong - a very popular spiritual practice, second only to Buddhism.  The Chinese Government first embraced it before calling it an evil cult.  The story is told initially from the point of view of a Canadian who practices Falun Gong.  His voiceover informs the audience of what the practice is as well as to what the government did to forbid its practice.  Innocents lives lost?  This Canadian meets a Chinese named Chen Ruichang (played by Jian Shi) who worked at a high level in the propaganda division of Guangdong TV till he was discovered praising Falun Gong and then brainwashed.  The process of self immolation is the term used.

The doc steers towards a different path after the first third leading the audience to believe the the Chinese Government has staged what has been telecast on the media through the world.  Questions like: Did one of those who set themselves bonfire at Tiananmen Square be staged?  This is one of the many questions posed and directors Pedicelli and Loftus go to great lengths to convince the audience that all could be done as part of government propaganda.  The conspiracy theory is all quite convincingly assembled together.

The doc was nominated for the Grand Jury Prize for Best Documentary at the Slamdance Film Festival 2020.  One thing is for sure, the research done by the filmmakers is most impressive.

When the trailer FORCE OF NATURE first streamed on YouTube, controversy arose for two reasons.  One was the trivialization of Puerto Rica’s Hurricane, one of the major disasters of the country in the story.  The other is the portrayal Latinos as the ultimate bad men vs. good white guys.  To make matters worse, its two stars Mel Gibson and Emile Hirsch have bad reputations.  Gibson had made anti-semitic remarks and both him and Hirsch have been known to be violent towards women.  What was Lionsgate thinking when making this movie?  Also the female lead Kate Bosworth is the director Michael Polish’s wife.

The rather silly story set during a hurricane stretches credibility to the limit.  The script by Cory Miller involves a gang of thieves led by some crazed guy called John the Baptist (David Zayas) planning a heist during a hurricane.  They encounter trouble when a cop, Cardillo (Hirsch) tries to force everyone in the building to evacuate.  The crooks happen to enter the same building as more valuable paintings are believed to be stored by some ex-Nazi.  Yes, and there is also some wild animal locked in a room by a building resident.  The hurricane affects the story sufficient enough to warrant the title of the film.

For all the film’s flaws, the hurricane effects are barely passible.  The action moves along quite fast so that the 90-minute running time is over quite quickly.

The best things about the film are the bad-ass attitudes of the cop Cardillo and the old cop Ray, both played by two actors in real life also with attitude.  Gibson’s characters reminds one of his glory days in the LETHAL WEAPON action films.  Cardillo has been stationed in Puerto Rica after accidentally killing his cop partner, and he cannot live up to the shame.  At one point, he is taunted with the shame by John the Baptist.  Before the audience can question how John knows about it, the script is quick to have him say; “I know everything!”  David Zayas is convincing enough as the foul-mouthed no-nonsense villain who is quick enough to dispose of anyone in his way, be it a cop or his own men.

Another loser of a movie after Lionsgate’s Bruce Willis’ SURVIVE THE NIGHT prove that using famous stars of the past like Bruce Willis and Mel Gibson will not make the movie.  The lazy script does not rise over its potential and Polish directs with an equally lazy hand.  The actors appear zealous enough to give the film what they have, though this is not enough to life FORCE OF NATURE to be a memorable thriller.  LIONSGATE stock has dropped in price from $40 a share during the studios hey-day with films like TWILIGHT and THE HUNGER GAMES to the present $7 a share with hardly a hit in the past few years.  I should shoot myself in the foot for keeping LIONSGATE stock. 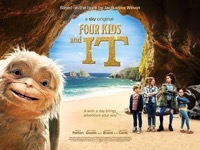 When the film opens, young Ros (Teddie Malleson-Allen) is taken by her father, David (Matthew Goode) to a seaside cottage in Cornwall for a surprise.  Ros thinks she is going to spend quality time with her dad only to be surprised that they are sharing the cottage with his new American fiancé and her kids.  (The elder daughter speaks with an American accent but the younger one with an Irish one - a big noticeable boo-boo!)  If this opening sounds familiar, it is the exact same scenario of the recent auctioneer BECKY that opened a few weeks ago.  But FOUR KIDS AND IT is a family film with the expected new bonding of Ros’ new family coming as no surprise.

Children should have no problem enjoying this magical adventure.  The kids in the movie develop superpowers like super-strength, laser-eyes who target  annoying adults as their targets.  They also get to fly and travel back into time, things that always fascinate the young.  The film’s setting of Cornwall by the seaside and high cliffs are the same as many children stories like the old Enid Blyton books on the Famous Five and others that many in the U.K. have grown up on.  The four kids in the film also get to meet the five children as they travel through time.

On the negative side, the adults are portrayed as bumbling fools (father burns the pot while cooking, while mother cannot make a decent dinner either) tricked by their children constantly.  This must be actor Goode’s most desperate role.  Comedian Russell Brand plays the villain Tristan Trent who want to capture the sand monster IT, voiced by Michale Caine.  The story gets too sappy with its need to constantly impress with a message for a family film.  One would blame both the book and the script for their lack of imagination.  For the book, only the children need be entertained but for the film, adults need to be kept from being bored as well.

The story is hardly an interesting one.  It gets into predictable territory quite fast and the second half of the film is barely watchable.  The only one surprise in the story is the appearance of the book’s author Jacqueline Wilson who makes a cameo during the closing credits.  Nothing more said, as this should be a nice surprise touch to an otherwise unimaginative film.

The current audience reviews on imdb are all pretty bad.  To be fair to the children’s flick, FOUR KIDS AND IT is what it is - a children’s film that delivers family fun.  Though it delivers with adventure, harmless humour with a few messages on life as well, it is far from anything surprising or novel.  It would be just a so-so family watch during the isolation times of Covid-19.

This is Lionsgate’s third awful film during Covid-19 after SURVIVE THE NIGHT and FORCE OF NATURE.