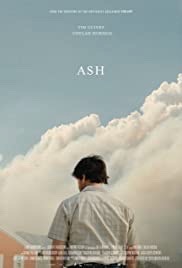 Wildfires make headlines every year.  Australia, the United States and Canada have all experienced the worst in uncontrollable fires.  ASH is one of the few films take uses this setting to tell a story, shedding some insight into these annual disasters.

Programmers for film festivals need the first five minutes of the film to grab their attention.  Often than not, programmers do not have the time to preview the entire film, so if the films do not match their attention, it is out.  ASH has been selected for a number of film festivals,  (among them the Vancouver International Film Festival, the Woodstock Film Festival, the Los Cabos International Film Festival and the Chilliwack Independent Film Festival) which is surprising as it has a very unimpressive start.  The protagonist stares out into the open in quiet, and he meets with his girl.  The audience does not know the setting and the two talk in riddles, taking a while before one can tell what is going on.  The one good thing about films having a slow start is that it can only move faster and hopefully get better.

The film’s short synopsis goes: a small town news reporter is accused of unspeakable crimes while he follows a massive forest fire that threatens his community. The crimes are pedophilia activities.

In this second feature from Canadian director Andrew Huculiak, ASH tells the story of a small town reporter, Stan (Tim Guinee) who, while reporting on the Okanagan wildfires, desperately tries to salvage his reputation and marriage when authorities accuse him of pedophilia.  Inspired by true events centering around director Huculiak's childhood friend's father, the story is set in his hometown of Peachland, BC.

At the 30 minute mark of the film, the audience leans of Stan’s unspeakable crimes.  The police appear at his house with a search warrant and he and his wife Gail (Chelah Horsdal) are informed that child pornography with an I.P, address had been traced to the house.  ASH invites viewers to explore the edges of their empathy as the film dives into the psyche of a man and his town in the aftermath of tragedy.

ASH deals with the subject of pedophilia.  It is annoying that director Huculiak never goes in deeper like Todd Solondtz did in his best film WELCOME TO THE DOLLHOUSE.  He protects his protagonist by having him declare to his analyst that he is on the child porn site to seek similar persons, curious about his odd and often violent temperaments.  His case is analyzed to be obsessive compulsive behaviour (OCD) and not pedophilia.  The result is a frustrating treatment of the subject, with Stan treated as a misunderstood hero rather that a problem citizen.  The scene between his analyst and Stan is incredibly stupid.  Stan relates all the facts to him with the analyst stating the obvious which was just what Stan had just told him. The film also promotes smoking.  Stan smokes a lot and so does the wife, the reason offered in the film is that it is an ideal street reliever.

But it is never made clear whether Stan is innocent.  The cops finally discover more material that incriminates Stan.  All Stan can say to his wife is that he has no idea.  The audience is left with no idea either.

The result is a film that ends up wishy-washy on an important subject.  The unsatisfactory film is largely directionless as well.

Denise Ho is a young gay female Kong Kong pop star.  Why would anyone want to watch a documentary of her?  This was my first thought when I heard about the doc, but after previewing this timely film, I can see the enormous impact the film has for not only Hong Kongese (as the people of Hong Kong call themselves) but for the entire world.

First of all, Denise Ho is queer.  She has been banned in China.  Her songs speak of rebellion and only recently, in her own words, has fantasy become a really.  Hong Kong, a former British colony had been given up to China under certain conditions, and China has not violated those conditions with a new law to be passed that criminals can be extradited from Hong Kong to China.  This has resulted in violent protests that have been going on for months with no apparent solution in sight.  Sue Williams’ doc is not so much a doc about the life of Denise Ho but her work in the issue Hong Kong has with China.  At most times, this issue take over her personality the film.

The film profiles the openly gay Hong Kong singer and human rights activist Denise Ho. Drawing on unprecedented, years-long access, the film explores her remarkable journey from commercial Cantopop superstar to outspoken political activist, an artist who has put her life and career on the line in support of the determined struggle of Hong Kong citizens to maintain their identity and freedom.

Discovered by legendary Cantopop songstress and actress Anita Mui (well known in Hong Kong but not in North America) in her teens in a singing contest, Denise Ho became one of Mui's disciples and songwriters before her solo career started to rise.  She came out to the world as a proud lesbian in 2012 at the Hong Kong Pride Parade, the first major female star in Hong Kong to come out as gay.  In 2014, at the height of her career, she started to publicly support the students who were demanding free elections during the Umbrella Movement (protesters held up umbrellas to fight off tear gas).  The film contains many disturbing and candid footage of protesters taking to the streets and often seated brutally by police.  Her influential involvement at the forefront of the pro-democracy uprisings led to her arrest during a clearing of protest camps. The financial and social cost to her was enormous. She was blacklisted by Mainland China, her music banned. As a result major commercial and luxury sponsors like Lancôme dropped her, colleagues feared to be associated with her, and venues around the world to this day are afraid to allow her to perform.  All of the above is shown in William’s well assembled archive footage coupled with solid voiceover narrative resulting in both moving and powerful message.

Williams’ film paints a very nasty picture of China, as a country not to be trusted and one that will prevent the human rights enjoyed by Hong Kong under British.  And rightly so.

ROGUE TRIP is a Disney+ streaming special that is indeed special to watch.  For one, the six episodes premiering Friday, July 24 on Disney+ will take audiences out of their Covid-19 isolation to the strangest of places.  Each episode runs in a different location of the world.

ROGUE TRIP is led by ABC News Correspondent Bob Woodruff and his son Mack Woodruff, taking viewers on a father-son adventure to some of the world’s most unexpected places – roguish nations (hence the title the series) and territories mostly known for conflict, but each possessing a unique power to surprise, amaze and inspire.  Places on showcase include  Colombia, Papua New Guinea, Ethiopia, Pakistan, Lebanon and Ukraine.  Along the journey, Bob and Mack will share raw, big-hearted moments when “going rogue” together changes their perspectives – not just on their own relationship, but on other people and places.  Each episode runs slightly over 30 minutes.  Each episode addresses the effect of industrialization like timber and mining on natural resources.

Colombia is notorious for its drug trafficking, which has an influence on Bob and Mack’s rogue trip.  Former drug guys now turn their hideouts and experiences to tourists as outsiders now get to see the raw beauty of the country.  The Woodruffs take their audience to the eastern part of the country where thick forests still exists.  Mack ventures out one night to discover the enormous varieties of species of insects that come out during the night.  They often travel by river to the jungles of the Amazon, where one can only the heat and discomfort of the climate.  They also encounter the bare-foot cowboys.  This episode includes a few clips of the father recuperating at home after his injury while in Afghanistan within saying that he would never imagine himself doing a series like this one.  This episode is an ok watch but the one on Papua New Guinea stands out as a clear winner.

Papua New Guinea (PNG) is as the Woodruffs claim, is as rogue as it gets, being one of the most unexplored islands on the planet.  It takes 40 hours for the Woodruffs to get to the island.  They then travel by boat along the Sepic River which runs 700 miles into the wilderness.  The episode also briefs the audience a bit of the island’s history with archive footage to boot.  Their first stop is the riverside town of Palambei where they witness an archery competition among various tribes.  Among the contests is the shooting of coconuts strung his up in the sky using the bow and arrow.  Father and son have a go as well.  Humour is provided by the comments, especially from the son in what is seldom seen ceremonies.  They also visit the village of the medicine man, after who attempts to cure the son’s sunburned leg and the father’s back pain.  There are tongue and cheek comments on the medicine mean’s practice while giving him due respect as well.  But the best segment is the crocodile hunting, including the finding of the crocodile eggs which the tribes consume.  The episode includes the visit to Power Island where no foreign visitors have ever stepped foot on.  The island is where the cannibal tribes fought before missionaries came.   The visit includes a cave where skulls are located.  The climax soundtrack is the welcome song sung by the tribe on the island sung in its original language.  The highlight and climax is the marine life, particularly the sea turtles surrounding the islands.