Two fims make their debut, THE PREY and THE ONE AND ONLY IVAN on Disney+.

The Disney+ straight to streaming feature about Ivan, a gorilla is, as stated at the start of the film, inspired by true events.  One wonders how this quite animalistic tale could be based on a true story.  But it is, and will be finally explained at the end of the movie just before the closing credits.

A gorilla named Ivan (Academy Award Winner Sam Rockwell) lives in a cage at the Exit 8 Big Top Mall and Video Arcade with an aging elephant named Stella (Angelina Jolie) and a dog named Bob (Danny DeVito) with no recollection of how they got there.  One would have thought that an elephant never forgets.  They are owned by Mack (Bryan Cranston), the owner of the Big Top Mall.  When an abused baby elephant named Ruby (Brooklynn Prince) shows up and is taken under Stella's trunk, Ivan starts to care for her as well and along with the janitor's daughter Julia (Ariana Greenblatt), they help to turn things around at the mall.

But ultimately, the film tackles the topic of freedom that all animals should be free and not spend their entire lives in captivity.  And so eventually the animals are freed.  In real life, Ivan is moved to the Atlanta zoo were he is supposed to have acres of land to roam in.

Based on true story or not, this is a pretty lame Disney feature that likely was made to stand in for the Disney Earth movies.  It does not help that the script by Mike White based on the novel by K.A. Applegate is super sugary sweet with the lack of a true villain in the story.  “There is always good in humans,” says Stella, the old elephant at one point in the film.  The only meanie in the film that might come close to a villain is the ringmaster owner of the animals, Mack, seen losing his patience when training the new baby elephant.  Still, he is all heart at the end.

The humour is mildly funny at best, with silly jones like elephants never forgetting and the chicken crossing the road.  Wait - a fart joke is also included.  Like many Disney movies with animals, the element of the violence of the animal kingdom is ever present, even in this movie.  This is evident when Ivan’s father is shot in the jungle, though only heard and not seen on screen.  The film also brushes away the question of how animals that have been domesticated all the lives can survive in the wild.  The problem is resolved by showing the animals frolicking with their own kind at the end of the film - something not really credible.  The film also gets sappy at every opportunity, trying to ring tears from the audience to take their minds off this mundane story.

THE ONE AND ONLY IVAN is as formulaic as any Disney movie can get.  With the male gorilla Ivan, the main child character has to be female.  Do not expect any surprises in the story.

THE ONE AND ONLY IVAN was originally slated for a theatrical release on August the 14th and will be released instead on Disney+ on the 21st. 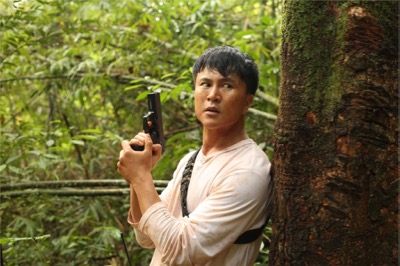 In Craig Zoble’s recent film THE HUNT, twelve strangers wake up in a clearing. They don't know where they are, or how they got there. They don't know they've been chosen - for a very specific purpose - The Hunt.  THE PREY follows a well worn genre of human beings being prey for the wealthy who pay a fortune to have a chance to hunt and kill human beings instead of animals.

In THE PREY, 12 prisoners are chosen from a remote Cambodian prison for this purpose.  But one of the prisoners happens to be an undercover martial-arts kicking Chinese cop captured by mistake.  Xin (Gu Shangwei) makes it from the clearing to the perimeter of the jungle where he has to outsmart the hunters at their own game.  The irony is that after years of hunting down ruthless criminals, Xin would suddenly find himself running for his life.   If Xin manages to survive this sadistic game, he’ll walk out of the jungle the same way he came in: as a free man. If Xin fails, he’s just another hunting trophy.

There are quite a few factors that make THE PREY stand out.  THE PREY is Cambodia’s first million dollar film.  Another is director Henderson’s good use of the Cambodia jungle setting.  Xin uses the wood from the trees to fashion his first weapon.  The fight by the gorgeous waterfall is another good use of the jungle setting.  The interaction of the two cultures of Chinese and Cambodian is interesting, especially the bonding of Xin and a fellow Cambodian prisoner in order to survive.  The sadistic prison warden role is again a cliched and familiar one but one that still holds an audience’s attention.  Vithaya Pansringarm (ONLY GOD FORGIVES) is the perfect villain audiences will love to see suffer a horrible death.

The action scenes are nothing too spectacular and sufficient to hold an audience’s attention.  The hero, of course with his martial-arts skills should outfight any of the bad guys.  Director Henderson has him injured and shot a few times, but Xin still manages to win his fights.

But the film is not without flaws.  One segment has a village take up arms to fight the bad guys.  How do the villagers get these weapons.  In another segment, Xin comes across a shack with a secret tunnel.  Xin concludes that the shack is used to make and smuggle heroin.  How did he come to this conclusion and even so, the script (co-written by Henderson) never take this point any further.  Perhaps the villagers are involved with heroin smuggling and got their weapons in this way.  Or perhaps not!

This is a male movie with only one tone female role of a Chinese inspector that works with Xin.  She at least has some sprite and subdues one of her foes.

THE PREY is not short of plot loopholes.  Otherwise, the film turns out as a surprising guilty pleasure that is entertaining enough given its familiar structure.

Details of how to view this film:

OPENING IN VIRTUAL THEATERS FRIDAY, AUGUST 21 WITH A NORTH AMERICAN (US & CANADA) VOD RELEASE TO FOLLOW ON AUGUST 25 ON ALL MAJOR PLATFORMS.

Films from Singapore show either the island nation’s poorer class as in Singapore director Eric Khoo’s films like MEE POK MAN or the ultra wealthy as in the recent successful CRAZY RICH ASIANS.  REPOSSESSION shows both.  Tan lives in a luxury condo with a well paying job till he loses it.  Audiences then see the other side, how he has to drive customers around like Uber to etch out a living in order to make payments.  This is the more common side of things - educated professionals struggling to make ends meet only because they have to keep  up with the Joneses.  The stress can lead to hell, as the film demonstrates.

The film is to be praised for its authenticity.  It shows the influence of the British in this ex-British colony.  The short form of mother is spelt ‘mum’ instead on ‘mom’ as used in North America.  Football refers to soccer.  The local languages like Mandarin and Hokkien (the most common Chinese dialect spoken) as well as the pigeon English (‘lah’ this and ‘lah’ that) and common cuss words like ‘Chee bai” (Hokkien for cunt) are heard in the dialogue.

When the protagonist Tan (Gerald Chew) accidentally hits a kid with his car and drives him home, the kid remarks that Tan looks very down.  Tan responds by saying that when one reaches rock bottom, the only way is up.  The kid replies; “How do you know that you have reached rock bottom.”  The audience is primed for worse things that are to come to poor Tan.  Tan strives to make some money through investing in stocks - what might seem an easy but dangerous way out.  As Singapore is a small nation dependent on outside economies, the stock market is highly unpredictable.

Singaporeans unlike westerners are afraid to show emotion.  They is little hugging or outward or showing affection (except for one hug Tan gives to his daughter, Ashley) in the film.  It has to be realized that this is the Singapore culture, to keep problems and feelings inside.  Whether Tan loves his wife (Amy Cheng) is only shown by a gift he buys for her to make her happy, even after losing his job.  The sexual relationship between husband and wife is expectedly conveniently omitted in the story.

Tan drives a prestigious Audi.  One of the customers he drives remarks about the expensive car.  It should be noted that an Audi costs at least two and a half times the cost in other countries because of the high Government tax on cars to limit the number of vehicles in the small crowded city.  In general, a person spends his whole life paying for the car he has bought.  He has to see the car after 10 years, or he loses all the tax that comes with the car after the period.  At one point in the film, Tan is advise to sell his condo and move into an HDB flat,  A condo is ultra expensive and Tan’s condo could go for more than 2 million dollars or more.  An HDB (Housing development board) is a subsidized government flat that costs only $50,000 and there is a waiting list to get one.  Living in a HDB flat puts one in a lower class.

REPOSESSION is a slow burn, following Tan’s slow downward spiral.  The directors quickly have the audience on Tan’s side at the beginning of the film as we see him unjustly let go from his job.  As expected, his ego prevents him from telling his wife for three months till she accidentally finds out.   She finds out at exactly the half way point of the movie.  At this point, Tan is extremely stressed out.  It is also at this point that the film takes a shift towards the horror that is promised.   The horror is made even more real for the fact it is psychological and not supernatural.

REPOSSESSION is a slow but meticulously crafted horror drama that captures the stress of Singaporean life quite accurately.  Highly Recommended!

A survey of REPOSSESSION’s upcoming Festival appearances include:  Click on one of these to register to see the film.