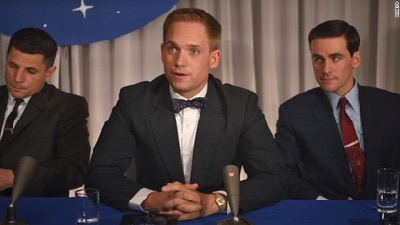 THE RIGHT STUFF is a Warner Bros. TV production series that premieres on Disney+ beginning October 9th.  On October 9th the first 2 episodes premiere followed by a new episode every week till November the 20th.

This review is for the first 2 episodes only.  The article will be updated each week, with an additional review for the additional episode screened.  Each week, the new episode can be read under ‘This Week’s Film Reviews’.  Only this first article appears as a separate article.

THE RIGHT STUFF 2020 is based on the famous Philips Kaufman 1983 film THE RIGHT STUFF and the 1979 Tom Wolfe novel of he same name.  Kaufman’s film was the rave of the time, and was indeed an excellent film, as I recall, though I do not remember much of it after close to 40 years.   The film was a financial flop though it received excellent reviews while winning 4 Academy Awards in the process.

That movie runs 192 minutes, 2 hours shorter than the 8 episodes combined.  With 5 minutes or so credits and recap of the previous episode, this means 30  - 40 minutes additional material, which is not that much.

The series is quite different from the film.  The film began with one of the greatest pilots of all time Chuck Yeager (Sam Shepard), the first test pilot to break the sound barrier who refuses to be in the NASA program.  The series goes straight into the NASA program with the recruitment of the 7 astronauts starting in the year 1961 then moving back 2 years earlier.

As expected, there is different emphasis to the adaptation of the book.  The Kaufman film is a minor masterpiece so dabbling with the best is prone to asking for trouble.  But it is what it is and the TV series should be examined on its own merits.

Please read review of each episode for more details.

Teleplay by Mark Laffery and Will Staples

The words at the start inform (warn) that the series is a dramatization of fictional events that are based on true events.  The first episode totally omits what occurred in the original film, the brief story of pilot Chuck Yeager who broke the sound barrier.  That part of the story depicted in Kaufman’s film was not really historically accurate, so omitting that section, one can assume that the filmmakers of the new series are attempting a more accurate account.

The episode is called Sierra Hotel because that is the venue of the briefing of the pilots that have been picked for selection for the Mercury 7.   The pilots are subjected to rigorous scrutiny both physically and mentally while their family background also examined to determine whether they have THE RIGHT STUFF.  The 7 are eventually selected at the end of the episode.

Of all the candidates, the episode concentrates on John Glenn (Patrick J. Adams) and Alan Shepard (Jake McDorman).   The two are depicted as totally different personalities - Glenn the ore stable one with Alan as the troublemaker.  But both are treated as white heroes, making American great and putting down the Russians.  The emphasis on this fact would likely upset many viewers.

It appears that the episode is gearing up for the pissing contest between Glenn and Shepard.  The episode lets the viewers take which side they prefer as the teleplay is generally impartial between the two, though favouring Glenn just a little.

The first episode is an introduction and plays as one.  Th aim is to show the rigour these men have gone through.  Whether they have THE RIGHT STUFF is primed to be determined in the next few episodes.

The first thing to note is that this episode was written by a female.  The episode shows more  of the astronaut’s wives points of view and how their lives are affected by the sudden fame, which might not be their liking.  When a reporter repeatedly shows up on one of their doorsteps, things turn ugly.  A deal is reached with LIFE Magazine to give each astronaut $25 grand and they keep all other reporters away in exchange for exclusives with LIFE.  This references to the GOODIES of the episode’s title.

The soundtrack is full of 60’s tunes though it is quite annoying that the songs are picked to tell the audience exactly how to feel at each point in time.  For example, when an astronaut purchases a brand new fast car, the song “Call me Irresponsible” is heard on the soundtrack.

The astronauts are moved to Florida in this episode.  There is nothing really outstanding in this episode which concentrates on just three of the men - and their wives.

Again the episode lauds America, how great it is, how this astronauts are heroes etc.  Americans will love it!

So far, flaws and all, the first two episodes are extremely watchable.

The third episode is kind of egoistic in approach.  It is America being number 1, all the astronauts trying to be number 1 and the most important thing in the world is to prove America is number 1 with their first man in space.  Helping poorer countries in need or even  poverty in the U.S. are ignored.  The only time the episode talks about teamwork, the segment ends with the boss being hit on the head by a volleyball and the launch exploding, emphasizing the failure of teamwork and again lauding individuality.

The case is made stronger by the episode concentrating on Alan Shepard, the most obnoxious and loud-mouthed of the Mercury 7.  He is the ‘single combat warrior’ of the episode title, which shows that one can overcome adversity which in this case is his ability to succeed in one of the anti-gravitational test units by sheer perseverance.

If the episode is to show how self-centred America can be, it succeeds dutifully.   The third episode is the wrong stuff!

A boring episode that runs longer than the first 3.  The setting is the advent of 1959.  The first half of the episode recounts all the troubles of the space program, highlighting the fact that the Americans cannot get a rocket off the ground.  In contrast, the Russians have taken photographs for the far side of the moon.  The worse worry is the funding of the program by the upcoming President.  The episode that takes a switch to the families of 3 astronauts, John, Alan and Gordy, looking like some family drama, giving the feeling as if the narrative needs some guidance.  Director Copus has the role of a traffic cop deciding who moves into the next scene.  It all ends with the New Year party ushering 1960 where everyone seems to be happy and having a good time.  Lets hope the next episode improves.