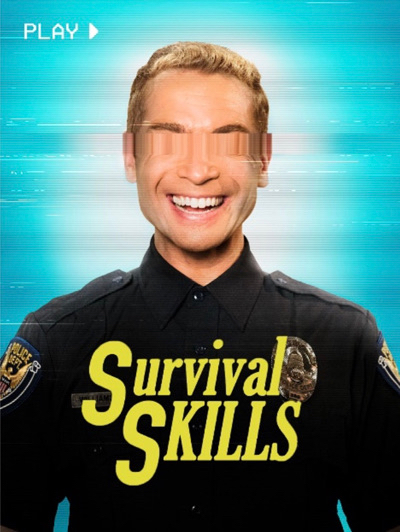 SURVIVAL SKILLS as defined by Wikipedia are techniques that a person may use in order to sustain life in any type of natural environment or built environment.  The environmental in concern in this new comedy is a built one, the police force, where the audience follows the path of a rookie police officer by the name of Jim Williams (Vayu O’Donnell).

SURVIVAL SKILLS the film, concerns a lost training video from the 1980s.  In it, Jim is the perfect policeman, but he gets in over his head when he tries to resolve a domestic violence case outside the law.

The video is played, all scratchy as are the displays coming from old VCR cassettes, from the start to end of the film.  The video is narrated by Stacy Keach, who has been made famous by playing a cop in one of his first films, THE NEW CENTURIANS opposite George C. Scott.  The narrator offers the knowledge of how to survive in the police force by following simple lessons, 7 in all as outlined in the video.  The main character who appears in the video, Jim unfortunately gets out of hand, while being too eager to do good as a good Samaritan.

The character of Jim Williams is a decent one.  He is the best intentions of everybody he encounters while trying not to to offend anyone in the process.  He is extremely polite while at it.  The trouble is that he is too naive in people’s goodness, which he discovers is nonexistent in many.  His naiveness comes across to may as inexperienced, dewy-eyed and simple-minded.  It is both his naiveness and good intentions get in the way of his survival skills in the Middletown Police department.

Keach delivers his lesson tongue-in-cheek style, showing his mettle as being a comedian.  Half way through the video, he has to warn Jim not to do what he is about to do but to follow his instructions.  When he fails, he screams, “I am the narrator.”  The film balances on the line of absurdist and deadpan comedy.

One problem the ilm faces is whether to go serious or silly.  The problem occurs a few times.  One is when Jim tries to convince an abused mother, Allison (Ericka Kreutz) to file charges on her husband and to leave the family home with the daughter   This is a pretty serious material for a comedy.  Director Armstrong bravely attempts both.

The film also pokes harmless fun at the Christian faith.  When seeking advice, he encounters twice the same message in the scriptures about faith, which says that faith is able to move mountains.  At this point, the blend between comedy and drama is achieved effectively.

Subtly, the film delivers the message of whether one is to follow ones heart or to go by the rules.   Jim undertakes the first to the detriment of the video’s narrator.  When Jim’s wife leaves him, it is a very touching scene when Jim cries, pleading with era “Please don’t go!”  The narrator scolds him on video: “You stupid fucking, naive child!  What have you done?”

The novelty of the unrealistic over documented training video delivered deadpan style runs its freshness quite early in the film.  But it is thanks to both actors O’Donnell and Keach for putting in their 100% in believing in the material and saving the comedy.