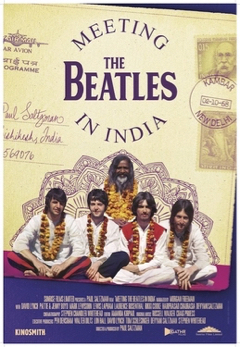 The Beatles did not go to India to perform.  In February 1968, the English rock band the Beatles travelled to Rishikesh in northern India to take part in a Transcendental Meditation (TM) training course at the ashram of Maharishi Mahesh Yogi.  The visit followed the group's denunciation of drugs in favour of TM and received widespread media attention.  The band's interest in the Maharishi's teachings was led by George Harrison's commitment, and it changed Western attitudes about Indian spirituality and encouraged the study of Transcendental Meditation. The visit was also the most productive period for the Beatles' songwriting.  In India they met Paul Salesman, the director of this film.  The film MEETING THE BEATLES IN INDIA focuses on this meeting and its outcome.

Filmmaker Paul Saltzman retraces his journey of 50 years ago when he spent a life-changing time with the Beatles at the Maharishi Mahesh Yogi's ashram on the banks of the Ganges River. In 1968, he discovered his own soul, learned meditation, which changed his life, and hung out with John, Paul, George and Ringo.  Fifty years later, he finds "Bungalow Bill" in Hawaii; connects with David Lynch about his own inner journey; as well as preeminent Beatles historian, Mark Lewisohn; Academy Award nominated film composer, Laurence Rosenthal.: and Pattie and Jenny Boyd. And much of this is due to Saltzman's own daughter, Devyani, reminding him that he had put away and forgotten these remarkably intimate photographs of that time in 1968.

The doc does not contain much archive footage or current interviews.  Most of the shots on the Beatles are from old photographs.  The main interview is with David Lynch, immediately recognizable from his fluffed up white hair, hairstyle.

Like most religious organizations, there is always the fall from grace,  The doc should have examined the Yogi’s fall, which would have at least made the doc a bit more interesting.  rumours of the Maharishi's inappropriate behaviour towards Farrow (other celebrities also attended the meetings including Mia Farrow, Donovan, Mike Love and Paul Horn) and another of his female students.  Dirty Yogi! The divisive influence of the Beatles' Greek friend Alexis Mardas, financial disagreements, and suspicions that their teacher was taking advantage of the band's fame have also been cited by biographers and witnesses.

To note, there is also a documentary called THE BEATLES AND INDIA.  That is a 2021 documentary film directed by Indian author and political journalist Ajoy Bose, based on his 2018 book.  It covers the Beatles' immersion in Indian culture and philosophy during the 1960s and the band's influence on India.`

The only plus of the film is to observe The Beatles in a more relaxed light.

MEETING THE BEATLES IN INDIA is a very slight film - more of a curiosity piece than anything else - lasting less than 90 minutes on the Beatles.  Not much about the music of the Beatles but more on Saltzman and TM.  The results in a boring piece unless one is interested in Yogis and TM.