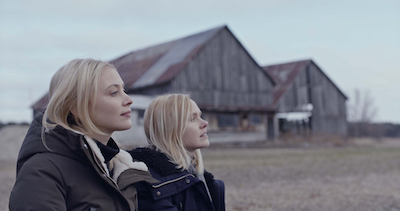 ALL MY PUNY SORROWS added up might mean so much to oneself that suicide might be the best option to take.  There are two suicides in the film - one that has already happened as witnessed in the film’s opening scene and another pending one, a failed suicide attempt by the daughter of the first victim.

The best thing about these suicides is that both persons are not (outwardly showing, anyway) suffering from mental illness, though there is mental anguish and depression.  This implies that suicide can be an option to many a sane person and one should watch for signs that one’s loved ones might have, if they fall into this situation.  This is all very serious matter, but the subject is infused with lots of wry humour in the immensely watchable, heart-wrenching story of two sisters (Alison Pill and Sarah Gadon).   Needless to say, Pill and Gadon both deliver stellar performances, as evident in their confrontational scene in the hospital room.

Yoli (Pill)’s writing career is tanking, she’s getting a divorce and making dubious relationship choices.  This is really humorously depicted - credit to director McGowan for his keen sense of humour and the excellent way his scenes play out.  Yoli is seen dating a man that looks like an accountant (though he is a lawyer) who her daughter scoffs at.  Even her mother (Mare Winningham) and daughter (Amybeth McNulty) sense Yoli’s unhappiness.  There is much humour between the interaction between mother and the smart-talking daughter who seems too smart for her own good.  Whenever the daughter appears, some biting dialogue always occurs.  One wishes there be more scenes with the daughter.  McNulty is excellent, and one hopes to see more of her in the future films.  In contrast, Yoli’s sister Elf (Gadon) is a world-renowned pianist, adored both by audiences and by her husband (Aly Mawji).  And yet, Elf is obsessed with ending her life, just as their father (Donal Logue) did 10 years ago.   Haunted by their father’s choice – and their oppressive Mennonite upbringing – the sisters stake their positions, often conversing in quotations.  “Elf wanted to die and I wanted her to live and we were enemies who loved each other,” says Yoli.

The film is clearly a woman’s film, based on the best selling book by female author Miriam Toews, with a story centred on two sisters and a mother.  As would be expected in a female dominated film, the female characters in the story are stronger than the male counterparts.  Yoli’s lover can be laughed upon, and the women have to carry on their lives after the father’s suicide.  Written and directed by a male, Patrick McGowan however, gives a male’s perspective to the proceedings offering a good balance.

The film was shot in and around North Bay, Ontario standing in for East Village, the fictional town that author Toews has used in the novel.

ALL MY PUNY SORROWS debuted at TIFF 2021, and has since earned many accolades, including four Vancouver Film Critics Circle Canadian Awards (best picture, screenplay, lead actor/female Pill and supporting actor/female Gadon), together with a spoton TIFF’s “Canada’s Top Ten” and Outstanding Canadian Feature at Cinéfest.   The is one of the Best Canadian Films of the year, a surprise that the film got overlooked by the Toronto Film Critics Association for Best Canadian Feature.

Watch the video and die!   If this sentence from a Japanese horror flick (THE RING) sounds familiar, a similar premise utilized in the new Netflix horror film CHOOSE OR DIE.  In a retro 80’s video game, the player has one choice: CHOOSE OR DIE.  But the choice always results in some horrific act like a victim getting his tongue cut off or one eating broken glass.

The film begins with a mother, Laura (Kate Fleetwood) and son, Gabe (Peter MacHale) yelling at each other before the mother complains about the useless father in his 80’s world playing with shit.  The camera shots to the father playing the deadly game in his basement.  It is revealed that the father, Hal, is played by Eddie Marson, one of the best English actors today, having made a great impression way back when in Mike Leigh’s HAPPY-GO-LUCKY playing the crazy driving instructor of Sally Hawkins.  Unfortunately this is the only scene the film has of Marson.  The film also hosts another English actor - the young Asa Butterfield who plays Isaac, another gamer who first gets hold of the deadly game, who fortunately does not play it.  The voice on the video game belongs to Robert Englund as he announces himself.  Almost every horror fan knows that Robert England plays Freddy Krueger in the NIGHTMARE IN ELM STREET franchise, though this is not mentioned in the film.  The director also happens to be British, Maekins, this being his first feature.

The first time the game is played is quite the attention grabber.  The words on the screen read:  You are in a cave.  Prove yourself worthy of the prize.  (The prize is $25,000).  The player has to choose and answer or some electronic sound will appear that would kill the player.  Hal is first asked:  ‘“His tongue or her ears?”   Hal has to choose or die.  Then, the words on the monitor reads:  “Play again tomorrow for more terror.”  When Kayla plays the game in a diner; it is:  “You are in a  diner.  Prove yourself worthy of the prize.”

The script written by no fewer than 3 authors (Simon AllenToby Meakins and Matthew James Wilkinson) personalizes the horror by setting Kayla up with a monotonous and low paying job at some company called Kismet.  She looks after her sick mother in their dingy apartment.  There is aluminium foil on the living room table, indicating that the meter is doing crack, supplied by a seedy character named Lance (Ryan Gage).  But the script never explains anything - like how it originated, how it chooses its victims and who wrote it.

If CHOOSE OR DIE sounds cheesy, it is but the scares are still plentiful, and quite nasty.  This Netflix horror flick achieves its aims and is worthy of the horror flicks that have appeared recently at Shudder, the horror streaming network.  CHOOSE OR DIE opens today, Good Friday April the 15th on Netflix. 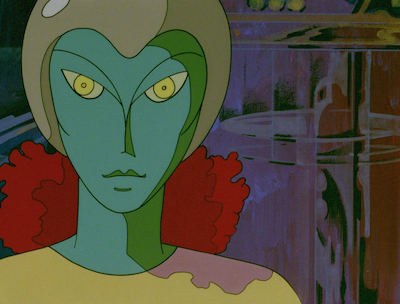 DELTA SPACE MISSION arrives touted as the first animated feature from Romania  The story started from the idea of a Romanian poem from the late 1800s by Mihai Eminescu, ‘Luceafărul,’ which talks about the impossible love between Luceafăr (Evening Star) and an emperor's daughter, “ said co-director Călin Cazan of the film. “Then we slipped in the story of the relationship between the computer and the alien journalist Alma, linking the action to what everyone had seen in 2001: A SPACE ODYSSEY.” 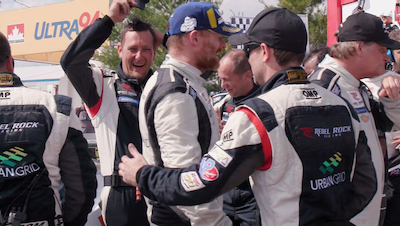 Director Bonvento plunges the audience right into the driver’s seat in his no-nonsense documentary on auto racing, as his lengthy introduction of the film’s 3 main characters are introduced via 3 paragraphs of words on screen, summarized in the paragraph following.

After achieving success in amateur  racing businessman Frank DePew purchased the assets of Rebel Rock Racing with the goal of testing himself in professional racing.  DePew hired professional driver and IMSA champion Robin Lidell to co-drive and manage.  Alongside is Joe Hall, the crew team chief.

Bonvento’s film follows the three characters, Frank, Robin and Joe together with other members of the team as they race 10 rounds aboard their Chevrolet Camaro GT4R.

Even if one is not a racing enthusiast, there is much to appreciate in the film as the three talk about getting their team working and not failing.  In this respect, ROOKIE SEASON feels like a sports drama.  Robin goes on, during the times of his failure, how this affects his feelings and emotions in life and what life lessons he has learnt on the way.  The races are all very exciting, a camera attached to the side of the car so that the audience has a first hand feeling of what it looks like from the driver’s point of view.  It is also added that the temperature inside the vehicle could reach up to 120 Fahrenheit.  One can see the driver sweating and feel the tension and stress he feels.  The advice and words he hears in the car is also heard by the audience.  At times, the racing jargon might not all be understood.  Prepare for the restart; first comes hello; greenfly, green flag…… though it is not necessary to understand all the dialogue in order to appreciate the action.

The audience is also informed, in the words of Robin, how difficult it is to win a race owing to the multiple unknowns involved in the equation.  Not only must the car be in top racing form, but so must the driver.  Then there are the other unaccountable factors like chance, weather, action at the pit stop and more.  The film follows a total of 10 races.  Frank’s team lost most of the initial races only winning from 5th one.  The ups and downs of the team are recorded by director Bonvento so that the audience is able to feel as the team feels.  Overall, Frank’s team came out in position 9 out of 42 and was the only team to win two races.

Again, if the racing team does not win and come out number one, just like the Olympics and other sports, director Bonvento is quick to mention that no one would remember you.  It is the number one that gets the champagne, the TV, the congratulations and the glory.

Director Bonvento has created a tense and exciting racing documentary capturing all the glory and woes of the sport.  The doc is concise and effective running at less than 90 minutes.