Series Review: Kids in the Hall 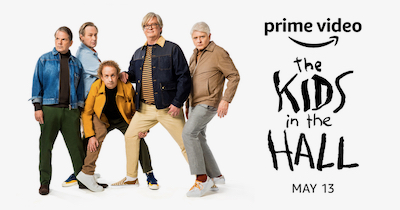 Indeed it is time to celebrate.  The KIDS IN THE HALL are back.

The iconic Canadian comedy troupe—Dave Foley, Bruce McCulloch, Kevin McDonald, Mark McKinney, and Scott Thompson— is back with a new season of their groundbreaking sketch series, featuring a fresh batch of fun offbeat characters and beloved favourites, with sketches that pack a satirical punch, laced with the hilarious, edgy, and fearless comedy The Kids are famous for.  The Amazon Prime Original series The Kids in the Hall are already available exclusively on Prime Video since May 13 in more than 240 countries and territories worldwide.

A bit of history: First premiering in 1989, the original Emmy-nominated The Kids in the Hall was an alternative comedy sensation that developed a die-hard fan base while influencing countless comedians and performers. The new season marks the return of The Kids, with eight new episodes featuring all-new sketches from the beloved comedy troupe.  The group also made a 1996 movie entitled KIDS IN THE HALL: BRAIN CANDY.

For those unfamiliar with the comedy troupe, they are truly Canadian - something Canadians can be really proud of, as they are simply hilarious to watch.  This review will just feature two episodes of  the new 8 episodes, episode 4 and 5, which are the reviewer's favourite.  The final skit in Episode 8 is also quite inventive and needless to say, also hilarious.  It promises more of the good that is yet to come.  It is best to watch the series with another as laughter is catching and even better to watch under the influence.  There are surprise guests who appear, as 'friedns of the kids', among them Mark Hamill from STAR WARS.

Here are the brief descriptions of each episode with elaboration on the 4th and 5th.

Episode 102: A doctor calms anxious new parents with his near perfect record; Buddy discovers a mythic landmark; A company policy is challenged during a Zoom meeting.

Episode 103: Morning DJ perseveres in a chaotic world; The Bard lives on with a super fan; A pair of shoes create controversy at the office.

In this episode the kids take on the super action heroes.  The unique superpower is first introduced by a young girl talking to her father asking him if he had ever been drunk.  It is soon revealed that the father is a superhero called SUPER DRUNK, aided by his trusty bartender who fights villains in the city of Toronto - like the one trying to destroy the CN Tower, Toronto’s landmark.  As in many of the series, the other members also appear, often in drag, and adding their individual brand of humour.  There are lots of swearing including the ‘f’ and ‘mf’ works but this episode is one of the funniest of the 8.

This episode gets my vote as second best.  The first couple is a gay male couple imeeting in Paris arguing about having sex and sex on the floor.  Another couple has the husband buying a million dollar house he cannot afford causing a disruption in their marriage.  The reason these two segments are so funny is that whether gay or straight, the premise hits close to home.

Episode 108: Restaurant staff question the logic behind a hygiene sign; Victorian dandy attempts to make friends; The Kids struggle to end the show.

Something more serious to look forward to:  A documentary on the KIDS IN THE HALL is already completed.  But one thing can be certain that the kids will ensure the doc is hilariously funny.