The Lavazza Inclucity Film Festival is part of the ICFF (Italian Contemporary Film Festival).  The venue is Toronto's Distillery District where one will watch the films under the stars while seated on large comfy sofas. 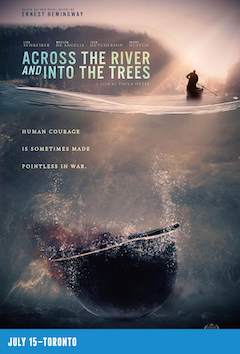 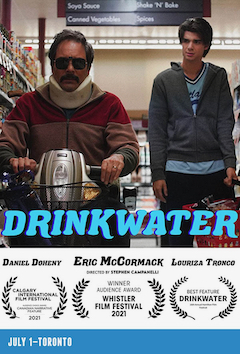 If there is any film that achieves the ‘honour’ of having the largest number of cliches,  DRINKWATER is it.  But director Campanelli tries so hard and his two performers are so good that one can forgive his errors.  The film, to his credit does have some fresh ideas though predictability is his weak point.  The protagonist of the film is an outsider in a remote British Columbian town.  While his jobless father, Hank, makes money from insurance fraud schemes,  Mike has to navigate the awkward teenage experience alone. To make matters worse, high school bully Luke Ryan and his father Wesley are a constant source of problems for the Drinkwaters.  However, when Wallace, a young American girl, moves in next door Mike’s life is changed forever. Deciding to help Mike train for an upcoming cross-country race provides Wallace with the perfect opportunity to learn about life in remote British Columbia. Through their shared experiences of feeling like outsiders, Mike and Wallace discover what it really means to belong. 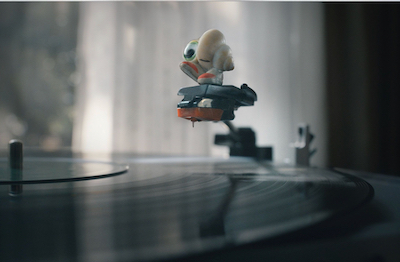 The protagonist of this stop-motion animation is a shell that looks dis-proportionate as he has an eye on one side and a mouth on the other.  The shell, supposedly a snail, has shoes on.  Though classified as a ‘he’ in the film, Marcel, short for Marcello, as the audience learns later on in the film, is locked bya female, Jenny Slate.  The result is that the shell sounds like a young male boy, a boy that is searching for his lost parents as a result of an adult couple quarrel.

Marcel is an adorable one-inch-tall shell who ekes out a colourful existence with his grandmother Connie and their pet lint, Alan.  Once part of a sprawling community of shells, they now live alone as the sole survivors of a mysterious tragedy.  But when a documentary filmmaker discovers them amongst the clutter of his Airbnb, the short film he posts online brings Marcel millions of passionate fans, as well as unprecedented dangers and new hope at finding his long-lost family.

The idea of MARCEL in reality began as a short film about Marcel, an anthropomorphic seashell outfitted with a single googly eye and a pair of miniature shoes. It is a collaboration between director Dean Fleischer-Camp and writer/actress Jenny Slate.  The film premiered theatrically at AFI FEST 2010, where it was awarded Best Animated Short and was an official selection of the 2011 Sundance Film Festival. It won the Grand Jury and Audience Awards at the New York International Children's Film Festival.

The plot of the full length feature follows the end of a marriage.  Documentary filmmaker Dean moves into an Airbnb and discovers Marcel, a one-inch-tall talking shell living in the home with his grandmother, Nanna Connie and Alan, his pet ball of lint. Inspired by Marcel's whimsicality, resourcefulness, and fascination with the world, Dean begins filming Marcel's daily activities, most of which consist of gathering resources from the backyard in order to support himself and Connie, who tends to her garden and is beginning to show signs of dementia. Marcel and Connie bond over their mutual love of 60 Minutes and Lesley Stahl. Dean uploads his first video about Marcel to YouTube, where it quickly becomes a cultural phenomenon. Marcel is both flattered and overwhelmed with his newfound popularity, lamenting that his family is not around to celebrate it with him.

However, the expansion into a full length feature suffers a few problems.  The film takes the already over-used mockumentary path and has a predictable ending of Marcel finding his family amidst the typical obstacles.  A really fresh idea that is stretched a bit too long its a full length feature, the film still has its charm, mild humour and odd-like animation, thus garnishing it at the time of writing a 100% approval on Rotten Tomatoes. 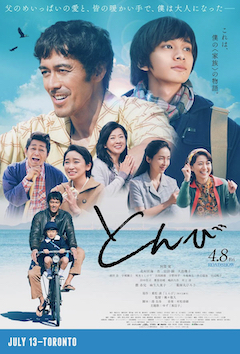 The film running at over two hours, which concentrates on the life of a father Yasuo and then with the relationship with his son, among other relationships feels like a family epic.  There is a lot of hurt, misunderstandings, skeletons in the closet as well as a lot of life lessons to be learnt.  Yasuo grew up an orphan so he knows the importance of a loving family and wants to provide his son, Akira, with the best life possible.  Happily married to the love of his life, working a steady job and raising a son are Yasuo’s greatest accomplishments. However, when a tragic accident changes everything and leaves Yasuo with a devastated son and a life turned upside down he must rise to the occasion and provide a stable life for Akira, as he always promised he would.  Director Zeze’s film, to his credit, tries its best to stay away from sentimentality and melodrama, though not always successfully.    There are a few really moving scenes like when Yasuo’s sister’s daughter comes into her restaurant to meet her mother for the first time.  Little dialogue in this scene but  otherwise overflowing in emotions. 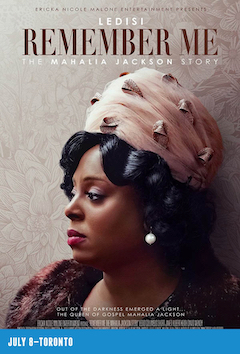 Mahalia Jackson (October 26, 1911 – January 27, 1972) was an American gospel singer, widely considered one of the most influential vocalists of the 20th century.  With a career spanning 40 years, Jackson was integral to the development and spread of gospel blues in black churches throughout the U.S.  The film emphasizes key issues like racial segregation, coloured rights, the recording industry and religion as were pervasive in American society.  She met considerable and unexpected success in a recording career, selling an estimated 22 million records and performing in front of integrated and secular audiences in concert halls around the world.  Jackson’s iconic voice helped to spread the message of the civil rights movement.  In a world full of mounting pressure in her career and the social-political landscape of America, Jackson will face challenges like no other and overcome them the only way she knows how: with her voice.  An occasional moving film that feels like a doc, the film’s best parts are the music, singing and dancing with the best scene shot in the jazz night club that Mahalia enters for the very first time.