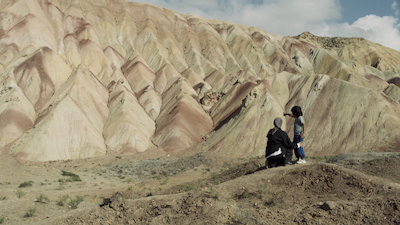 HIT THE ROAD is an Iranian film that arrives with accolades after winning Best Film at the London Film Festival.  If the director’s name Panahi sounds familiar, it is because Panah is the son of famed Iranian director Jafar Pnahi who was jailed in Iran and banned from making films for a period of 20 years.  Yet Jafar made TAXI TEHRAN and THIS IS NOT A FILM, smuggling these films out of the country.  Needless to say, Panah has gained lots of his experience from his father’s filmmaking and HIT THE ROAD shows it.  Like his father’s films, HIT THE ROAD is simple, entertaining and full of meaning.  But the film is not without flaws.

The film follows a family’s road trip in a borrowed car.  A chaotic, tender family is on a road trip across a rugged landscape, but where to?  In the back seat, Dad (Hassan Madjooni) has a broken leg, but is it really broken? Mother (Pantea Panahiha) tries to laugh when she is not holding back tears. The kid (Rayan Sarlak) keeps exploding into choreographed car karaoke. All of them are fussing over the sick dog and getting on each others’ nerves.  Only the mysterious older brother (Amin Simiar) is quiet.  There are no names given to the family members, indicating that what transpires could happen to any family.  It is a sort of road trip from hell, in which no one seems to be having a good time.  They argue about everything from the kid bringing his cell phone when told not to, to the mother confiscating it and hiding it under a rock.  But all they have is each other and have to make the best of the situation.

Director Panahi keeps a lot of the film’s story ambiguous.  This can be quite frustrating.   The audience learns through the family dialogue in the car, that the family has lost their house and borrowed this car.  Borrowed the car from whom?  And the reason for the family losing the house is never addressed.  All that can be guessed, owing to the quiet nature of the driver and older son, is that he could have done soothing against the Iranian government - a government not known to be tolerant to criticism.  Perhaps director Panahi is addressing his father’s problems with the government being extra cautious so that he will not run into trouble himself.

It can be noticed that as the family in their vehicle comes closer to the border, the landscape becomes more inviting.  There is more green and less desert, though director Panahi also celebrates the beauty of the desert at the film’s beginning.  This could be a sign that things are looking up for the family, but again Panahi keeps the film’s ambiguity.

HIT THE ROAD, not a bad movie for a first time director, succeeds in demonstrating the family’s odd dynamics.  The actors portraying the family are convincing enough, and the actor playing the boy is annoyingly charming.  If only the director would have made clearer what the family or film’s aim is. 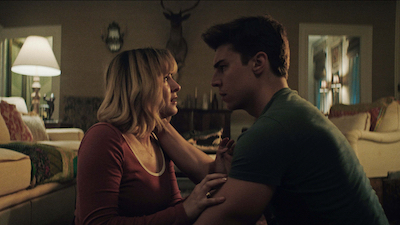 During A LONG NIGHT of the weekend, a devoted couple's quiet weekend takes a bizarre turn when a nightmarish cult and their maniacal leader come to fulfill an apocalyptic prophecy.

Grace (Scout Tylor-Compton) needs to see out her parents she never knew from the south.   She gets hope from someone who tells her to meet him in a house and if he is not present, to find the keys under the doormat out front.  Grace goes, accompanied by her Ivy-League boy friend, Jack (Nolan Gerard Funk).  Arriving at the house, there is no one present so they let themselves in and settle in for what appears to be a very long night of horror.  They discover a cult.  The house has a few references to Hitchcock’s PSYCHO.  “Is the placer by Nrman Bates?” is Jack’s initial remark on the house.  The house comes complete with at the head of a moose having on the wall and a rocking chair, like the one Bates rocked on in PSYCHO.

Cult films have always been interesting, the most famous ones being the British 1973 cult classic THE WICKER MAN directed by Robin Hardy and the more recent MIDSOMMAR (2019) directed by Ari Aster.  THE LONG NIGHT aims to be one.  Told in six chapters, with titles like ‘Seduction’, Encounter’ and ‘Experience’, THE LONG NIGHT is not bad even though it never reaches the heights of the two aforementioned films  Most of the action takes place at night, with the exteriors lit often just from the fire of forces and the darkness adds to the creepiness of the film’s subject and atmosphere.  Director Ragsdale has built up a couple that the audience cares about, despite little arguments they have, being of different backgrounds.  When the cult members appear. Jack remarks to Grace: “These are your people!”   When she rebukes him for the outrageous remark he says, hilariously though in a  dead serious tone: “They don’t teach you this at Princeton”.  Still, he says to her early in the film: “Don’t worry - everything is going to be fine.” which in cinematic language means: “Watch out, something is going to go wrong.”

The special effects regarding the snakes/serpents are scary and convincing and the totem pole prop is also impressive.

Director Ragsdale (a noted film score composer, EIGHT-LEGGED FREAKS) and writers Robert Sheppe and Mark Young reverse the roles of the male and female occasionally in the star.  It is the male, Jack who does the shower scene.  Jack is quite a looker, with a handsome face and well-built physique.   Other than the female being the damsel in distress, Grace is seen to take control of the situation.  In one scene he hacks an attacking cult member to each at the top of the stairs, much to the surprise of Jack.  The Master of the cult is also female, played by Canadian actress Deborah Kara Unger (CRASH, SILENT HILL) though her performance is a bit laughable and over-the-top.

The cult horror chiller debuts on Shudder this week. 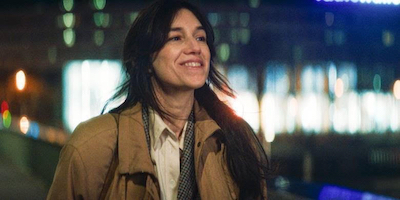 The film begins with  celebration on the streets of Paris.  The date May 10, 1981 flashes on the screen.  To those unfamiliar with that, it is election might and the Parisiennes are celebrating a new air of hope and change.

But it is a different change in store for the film’s protagonist.  For Elisabeth (Charlotte Gainsbourg), her marriage is coming to an end and she will now have to support herself and her two teenage children.   As she tells her father, she now has to look for work.  She (not too tech-savvy) is first hired and fired on the same day because she forgets to save a file after entering all the inventory data.  Her daughter tells her that she should have remembered what she taught her - using autosave.  There is a slight problem in timing of this scenario, as in 1984 there were little or no PC’s around.  How could the daughter be familiar with computers and most data entry were done on main frames.  The auto-save feature in 1984 was unlikely to be invented yet.  But other props like the older looking television set look authentic for the year 1984.

At the time, radio talks shows were still popular.  She finds work at a late-night radio show and encounters a troubled teenager (interviewed for the program PASSENGERS OF THE NIGHT, named Talulah whom she invites into her home. With them, Talulah experiences the warmth of a family for the first time.  Although she suddenly disappears, her free spirit has a lasting influence. Elisabeth and her children grow in confidence and begin to mature.

Emmanuelle Baert who rose to fame after MANON DES SOURCES has an important supporting role as Vanda, Elisabeth’s chain smoking radio boss.  Vanda shows strength and vulnerability, often controlled by her moods affected by forces beyond her control.  Beart is a pleasure to watch, especially when she is delivering her performance demonstrating strong screen presence, especially stealing the club scene where she is seen still with a cigarette in her mouth while grooving on the dance floor.

Cinema plays a big part in the film’s narrative.  The first instance he two teenage children learn about independence is when they go for an evening at the cinema.  They’re taught and shown how to sneak into the theatre after not being allowed in, after being more than 5 minutes late.  Talulah also tells them that he loves the cinema and it makes her forget who she is.

Director Hers moves his film at a casual pace, allowing his audience  to let the events of the story of the action and behaviours of the characters sink in.

Major classics stories include a stranger that comes into the lives of a family, then disappears while making a distinct impact.  Among these are of course MARY POPPINS and the stranger in George Stevens’ classic SHANE.  In this film, Talulah is the stranger who disappears right after having a sexual encounter with Elisabeth’s son.

PASSENGERS OF THE NIGHT is an easy flowing yet effective family drama in which a family hears and grows from a stranger in their lives.