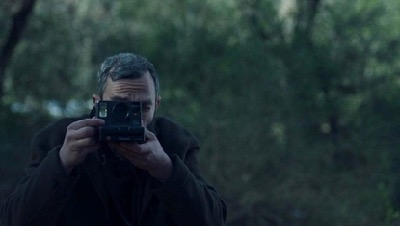 Director Christos Nikou worked as the assistant director on Yorgos Lanthimos’s absurdist surreal comedy DOGTOOTH in 2009.  His debut film, APPLES, first screened at the Venice Film Festival,obviously draws many similarities to Lanthimos’s style of direction.  The film premiered in Toronto to critics only at the Toronto International Film Festival 2020 when the festival was done on-line due to the Covid pandemic.

APPLES, however is a drama rather than a comedy making it a much harder and slower watch.  The film opens with the main character played by Aris Servetalis being awoken on a bus, not remembering anything including who he is.  He is brought to a hospital for examination.  Apparently there is an epidemic going around where many are suffering amnesia out of the blue and for no reason.  The character eats an apple and is seen eating apples which is the reason the film is so called.  Nothing really happens except that the film visualizes the pain and suffering due to the unexplained illness.

Given cassette tapes outlining tasks that move from bike riding to more risky stuff, he has to record his experiences with a Polaroid camera, thus creating a photo album of new memories.  Then he meets a young woman (Sofia Georgovasili) who is also in recovery.  Things develop, but very slowly - which is director Nikou’s style.

The character is offered a new identity by the hospital to survive as his memory is not improving at all, as evident in the tests (again, very slow ones) conducted.  The film might feel more relevant due to the Pandemic Covid-19 virus, but Nikou's film requires patience and director Nikou takes his time to tell his story.  The film also has a sort of Kafka-ish feel, which might interest those who like this sort of atmosphere.  However, many will find the film frustrating as the film has the feel that it leading nowhere.  The trouble is that director Lanthimos has tread this territory before and has done much better, 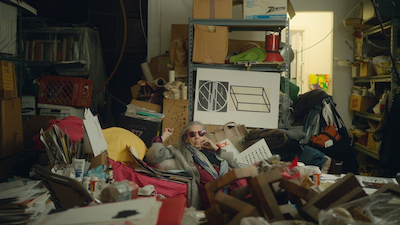 DREAMING WALLS: INSIDE THE CHELSEA HOTEL is a nostalgic documentary of the iconic Chelsea Hotel, a haven for famous artists like Dylan Thomas, Janis Joplin and the superstars of Warhol’s Factory.  But new owners want to transform it into a luxury hotel.  Dozens of long-term residents, most of them elderly, have lived amidst constant construction for close to a decade.  The doc tells their story.

Among those featured is choreographer Merle Lister who roams the hotel with her walker, side-stepping lumber and ladders.  Another resident shows how his apartment has been reduced from several rooms to a studio size.  Yet another artist Bettina Grossman, the hotel’s oldest tenant, says she thinks the owners would like to see her die.

The Hotel Chelsea is a hotel (250 units) in Manhattan, New York City, built between 1883 and 1885.  Famous for the fact that it has been the home of numerous writers, musicians, artists and actors.  Though the Chelsea no longer accepts new long-term residents, the building is still home to many who lived there before the change in policy.  Arthur C. Clarke wrote 2001: A Space Odyssey while staying at the Chelsea, and poets Allen Ginsberg and Gregory Corso chose it as a place for philosophical and artistic exchange.

In the doc, one resident claim that the hotel was home to a suicide and a stabbing, both of which are true.  It is also known as the place where the writer Dylan Thomas was staying in room 205 when he became ill and died several days later, in a local hospital, of pneumonia on November 9, 1953, and where Nancy Spungen, girlfriend of Sid Vicious of the Sex Pistols, was found stabbed to death on October 12, 1978.

DREAMING WALLS begins with blurred images of celebrities of the past (Marilyn Monroe, Salvador Dali) superimposed on a bricked wall, assumed to be a wall in the famous Chelsea Hotel.  The images give the impression that the wall is dreaming of the people that have walked past it, who have at one time or other lived at the Chelsea.

One construction worker talks about ghosts in the Chelsea Hotel and how he can feel them.  He says that the ghosts are either dead or trying to get out.  One wonders at the choice of subjects the director have picked for the doc as this worker nearly talks a lot of rot, often not making much sense.  The lady with the walker talking to him ends up dancing with him in an arguably irrelevant scene.

Like the recent documentary on the NYC subway END OF THE LINE, DREAMING WALLS is a doc about a structure in a city.  For Canadians, a doc set in a city a ways away might not be of as much interest unless one had lived or perhaps stayed in NYC.  This problem exists for both these docs, END OF THE LINE and DREAMING WALLS - about a subway and hotel in NYC.  For the former doc at least, most cities share travel through subway lines, so the problems faced in END Of thE CITY are also relevant.  However, the same cannot be said about the Chelsea Hotel.  The filmmakers make no attempt to make their doc or the hotel more relevant to non-NYC dwellers.  It would also help that the Chelsea be shown in all its splendour and glory using archive footage but there is little of this safe, for mention that it was one of the tallest  buildings in the city  at the time of construction.  What the audience sees for the most part of the doc is a dilapidated building full of elderly complaining residents in a depressing atmosphere.  The doc should be more interesting to those who live or have lived in a hotel or have stayed at one time or other at the Chelsea. 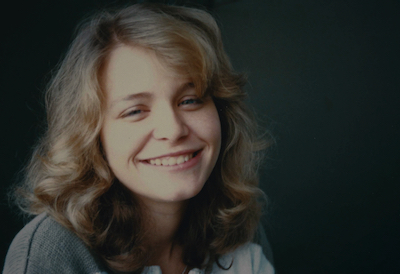 True crime documentaries have been quite the hit these days on today’s streaming services.  GIRL IN THE PICTURE follows the same route and thankfully is one of the more memorable ones.  The question is who is the GIRL IN THE PICTURE as seen midway in the film?  Is it Sharon Marshall?  Whoever she is, she is going by many names such as Tonya Hughes and Suzanne Sevekis.

The film begins with a hit-and-run and the victim dead in hospital.  Three guys driving at night see some debris on the road.  The debis turns out to be a body.  Her body was found with a severe head injury on the side of an Oklahoma City road in April 1990. The nurses discover bruises on her body indicating physical abuse.  When it is discovered that she has left behind Michael, her two-year-old son, the plot thickens.  Sharon's death was shrouded in mystery for decades, before her real identity was revealed in 2014, over two decades after she died - thanks to the brilliant and dedicated FBI agents assigned to the case.

Though classified as a doc, director Borgman’s film unfolds like a top-notch mystery thriller that is an absorbing watch from start to finish.  Director Borgman weaves his tale with finesse and brilliance creating a compelling film.  It helps that his story is already a solid mystery thriller but Borgman knows how to milk his material.   Using re-enactments, archive footage, interviews with the investigators and family, workers and friends and photos from school year-books, Borgman crafts a mischievous tale that should not only entertain but scare.  After all, the greatest of horrors are often so close that one does not often realize the fact.

Sharon Marshall is recognized by her working colleagues in a strip club (Mons Venus) as Tonya.  Later on in the film, it is discovered that she was born Suzanne Marie Sevekis on September 9, 1969.   So the story is as gripping as it is true.  The story has a villain in it as well - the one who had inflicted the bruises  on the supposedly hit-and-run victim.  He is Franklyn Floyd, but again that is one of the names used by the villain.  The least said the better as a large part of the enjoyment of the doc is the multiple twists in the story.

GIRL IN THE PICTURE serves as both a doc and a true to life horror movie.  It is really disturbing to know that a story like this one had actually happened in real life and a woman had suffered so much under such an evil man.  The doc shows her to be a really pretty and intelligent teen who had won a scholarship to Georgia Tech to fulfil her dream of becoming an aerospace engineer.  But her step-father destroyed and murdered her.  If you want to see a real horror film, GIRL IN THE PICTURE is the one.  It is now playing on Netflix. 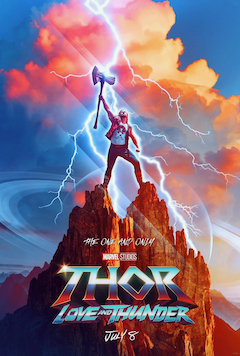 THOR: LOVE AND THUNDER is a 2022 American superhero film based on the Marvel Comics character Thor, produced by Marvel Studios and distributed by Walt Disney Studios Motion Pictures.  It is surprising the film opens after July the 4th as it would have helped the film industry if this obvious crowd-drawing blockbuster opened during the American long weekend.  Time flies in the Marvel Universe.  This is actually the third sequel to the original THOR (which means this is THOR 4) and the 29th film in the Marvel Cinematic Universes (MCU).

THOR: LOVE AND THUNDER is the direct sequel to Thor: Ragnarok (2017). The film is directed by Taika Waititi, who co-wrote the script with Jennifer Kaytin Robinson.

With the often very funny Chris Hemsworth as the lead star and with New Zealander Taika Wiatiki with his odd sense of humour, the latest THOR turns out to be quite funnier, funnier than most films in the MCU and far too funny for its own good.  The story seems all over the place, and the hilarity compromises the action set-prices which are supposed to put audiences at the edge of their seats in Hollywood blockbusters such as this one.  Take the funniest segment where Thor argues his case in the court with the high and mighty Zeus (Russell Crowe, the funniest that one has seen him before).  To add to the humour is the appearance of the members of the GUARDIANS OF THE GALAXY.  The only actor who takes the enterprise seriously is Christian Bale who plays the main villain, Gorr  growling and angry all the time.

Those who love MCU films will have a field day.  There are dozens of cameos.  Additionally, the Guardians of the Galaxy are featured in the film, with Chris Pratt, Pom Klementieff, Dave Bautista, Karen Gillan, Vin Diesel, and Bradley Cooper reprising their respective MCU roles as Peter Quill / Star-Lord, Mantis, Drax the Destroyer, Nebula, Groot, and Rocket,[3] alongside Sean Gunn as Kraglin Obfonteri. Matt Damon, Sam Neill, and Luke Hemsworth reprise their roles as Asgardian actors respectively playing Loki, Odin, and Thor, with Melissa McCarthy joining them as an actress playing Hela.Akosia Sabet appears as the goddess Bast. McCarthy's husband Ben Falcone, singer Jenny Morris, and Simon Russell Beale have been cast in undisclosed roles.

The film also contains too much sentimentality for its own good.  Thor attempts to find inner peace, but must return to action and recruit Valkyrie (Thompson), Korg (Waititi), and Jane Foster (Portman)—who is now the Mighty Thor—to stop Gorr the God Butcher (Bale) from eliminating all gods.

As in all MCU films, one has to stay to the end of the closing credits for a surprise.  Indeed, there is one in this film as well, which will not be revealed, even though it makes little sense to the plot or story.

THOR: LOVE AND THUNDER ends up an action pic with no love and all noise.