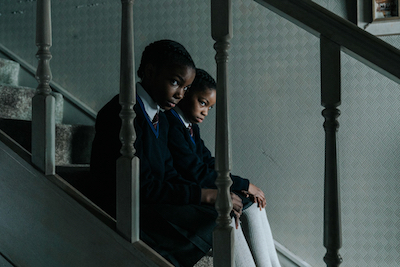 After the press screening of THE SILENT TWINS, I turned to a fellow colleague film critic and said:”I thought it was all rubbish and am surprised to find out at the end from the end credits that everything that transpired is true.”  My colleague replied: “You can’t make this shit up.

THE SILENT TWINS is the true story, unfolding in chronological order of twin sisters, who communicate with one another but with no one else.   As a result, extreme problems are created and they are taken out of school to attend a special one till more mishaps occur.  The film is based on the best-seller THE SILENT TWINS and adapted to the screen by Andrea Siegel.  It stars Letitia Wright and Tamara Lawrence as the grown up pair.   They grew up in Wales, Both women were committed to Broadmoor Mental Health Hospital for a period of 14 years.

Feeling isolated from that unwelcoming community, June and Jennifer Gibbons turn inward and reject communication with everyone but each other, retreating into their own fantasy world of artistic inspiration and adolescent desires.   The reason is speculated and assumed from the incidents that unfold as the doctors and professionals are unable to determine the cause of their isolation with the outside world.  The film traces the beginnings as children leading in the last third of the film when trouble and trauma escalate.  The twins take their anger to the outside.  After a spree of vandalism inspired by an American boy they both idolize - a wealthy snot of a kid - who abuses them, the girls, now teenagers, are summarily sentenced to Broadmoor Hospital, an infamous psychiatric hospital, where they face the choice to separate and survive or die together.

Director Smoczynska (her debut film is the 2017 THE LURE) never if seldom attempts to offer any explanation of the girls’ actions or behaviour.  The  weird incidents are mostly revealed on screen leaving the audience to decide and to judge or to sympathize with the twins.  The result is quite a puzzling film, which seems to stretch credibility at the same time.  The film has the feel of a psychological horror film , especially from the many settings in the mental institutions.    The film also contains dramatic confrontations with the twins fighting each other and the one compelling segment where their elder sister tells them off during a family dinner.

This is not the first film based on the twins.  In 1986 it was first seen as a television film directed by Jon Amiel, broadcast as Season 2, Episode 2 of Screen Two.  I have not seen this version but it was written by Marjorie Wallace, the author of the novel.

THE SILENT TWINS, a Poland/UK co-production, which premiered in the Un Certain Regard section at Cannes, opens in theatres on September the 16th. 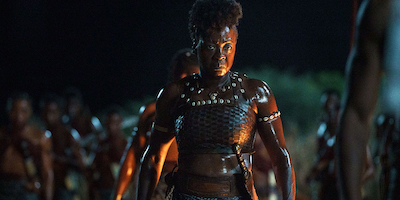 Beware the wrath of Viola Davis (See image inset).  You do not want to mess with her.  Oscar Winner Davis the star of this rather ridiculous epic, based on true events as the audience is led to believe follows a woman warrior as she leads a whole bunch of fighting African amazons to conquer their enemies while fighting for human rights like demolishing slavery in a film so overdone that it is unintentionally hilarious from the costumes, African chanting and choreography.  The audience is also given a glimpse of token safari animals like the giraffe.  If white filmmakers were to make a film like this, the film would be considered totally racist.

Though Viola Davis as THE WOMAN KING is the main draw, the story actually centres on a young girl training to become a warrior. She eventually succeeds to become the best one in the group.  The year is 1823. Orphaned at birth and raised by an abusive guardian who seeks only to marry her off for money, young Nawi (Mbedu) petitions for entry into the Agojie, led by the single-minded Nanisca (Davis). To defend their people against the oppressive and heavily armed Oyo Empire, the Agojie run candidates through an arduous training program. Nawi proves herself an outstanding, ferocious soldier, though she questions the Agojie rules, which state that no one in their ranks shall marry or have children. As the Agojie prepare for the fight of their lives against both the Oyo and the Portuguese slave traders with whom they are in league, long-buried secrets come to light, revealing harrowing stories of personal sacrifice that will only strengthen the bonds between these unstoppable warrior women.

THE WOMAN KING contains some great fight scenes though enhanced a bit too much with CGI.  At least the audience can see the faces of the warriors unlike films like LORD OF THE RINGS, which look like thousands of animated cartoon characters fighting each other on a large scale.  One might expect that the actors needed to perform some fancy gymnastics or at least nimble movements to get the fight scenes done.

The film includes an awkward romance between Nawi and a Portuguese trader that just does not cut it.  She is so tiny compared to the hunk, the romance not helped by being inter-racial.

The warrior training scenes looks something right out of a martial-arts movie complete with an obstacle course modified from the one used in army training.

THE WOMAN KING is directed by a female  who has a few solid films under her belt.  She displays in her film the glories and independence of women - even with an evil queen has her say.  The film is the exact opposite of the typical Hollywood film that stars a white male hero fighting and conquering all.  The film does the complete opposite posing the question, looking from the other point of view whether the female black biased film is falling into the same trap.  The film premiered at the Toronto International Film Festival to general favourable reviews and opens this weekend world wide.

her film the glories and independence of women - even with an evil queen has her say.  The film is the exact opposite of the typical Hollywood film that stars a white male hero fighting and conquering all. 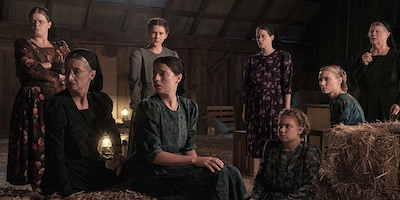 Probably the most talked about film at TIFF this year, writer/director Sarah Polly tackles the ardent task of adapting Miriam Toews’ acclaimed novel about a cloistered world of a religious commune where women struggle with an epidemic of abuse.  Many have been put under the influence of cow tranquilizer and sexually attacked by men.  The women hold a meeting to decide one of three options which are to do nothing, stay and fight or leave the men and fight.  Regardless of the outcome of the vote, there will be dire consequences.  They debate and argue all the points and hence we have WOMEN TALKING.  Shot in back and white, this is a powerful film in these times of sexual abuse with a fine cast of actors including Rooney Mara, Claire Foy, Jessie Buckley, and Judith Ivey, with Ben Wishaw and Frances McDormand all delivering unforgettable performances.