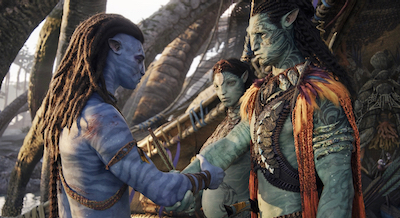 AVATAR: THE WAY OF WATER is the long awaited sequel to AVATAR way back was the film that would have made or broken 20th Century Fox.  A whole lot have happened since then including the fact that Disney bought over 20th Century Fox.  One thing is for sure - James Cameron, the director of blockbusters like AVATAR and TITANIC has not lost it.  THE WAY OF WATER is blockbuster entertainment at its best - with special effects, heroics, a fight to the death at the climax between hero and villain with death not shy-ed away.  Forget Marvel super heroes.  Cameron’s characters are the next best thing.

Set more than a decade after the events of the first film, AVATAR: THE WAY OF WATER tells the story of the Sully family, the trouble that follows them, the lengths they go to keep each other safe, the battles they fight to stay alive, and the tragedies they endure.  It is a safe story that contains all the elements that make commercially satisfactory film.  The film begins with the intro to the Sully family - how he is outlawed and then the story introduces the 4 children, two males and two females, all of them radically different.  It is the young boy that catalyzes the events that take place.  The villain is the hunter.  The film comes complete with an Alfred Hitchcock type climax where the hero and villain fight and to hand combat whether be it .t the Statue of Liberty in FOREIGN CORRESPONDENT or Mount Rushmore in NORTH BY NORTHWEST,  In this film, the fight takes place amidst a Titanic-like sinking military vessel.

There are many carefully crafted moments when director Cameron’s film soars.  Cameron knows how to make films that move audiences.  The best moments include the teen boys taming their sea creatures (as in HOW TO TRAIN YOU DRAGON) before taking them into battle.  Cameron also brings in the environmental element in, with the introduction of the majestic coon creatures.  His film includes, adventure, coming-of-age and rites-of-passage, old-fashioned good vs evil with a few messages to boot.

The film has shades of TITANIC, unsurprising since Cameron directed that major success hit TITANIC.  The scenes of the crew abandoning the battle ships during the climatic battle between good and evil are reminiscent of the sinking Titanic.

The actors in the film include heavyweights like Sigourney Weaver, Sam Worthington and Kate Winslet.  Sigourney Weaver has the third star billing though she appears for less than 3 minutes and has only  few line of dialogue to say.  The characters speak with different accents - Cameron makes no effort to disguise these.  The characters speak with American, Australian and French accents.

AVATAR: THE WAY OF WATER is best seen in 3-D IMAX.  It has been a while since I had put on the 3-D glasses.  But it is well worth the wait.  THE WAY OF WARER is the best action blockbuster film of 2022- hands down. 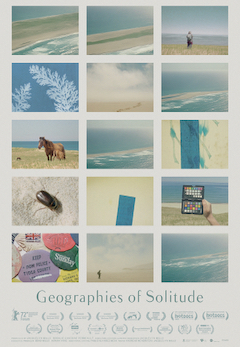 GEOGRAPHIES OF SOLITUDE is an immersion into the rich ecosystem of Sable Island, guided by naturalist and environmentalist Zoe Lucas who has lived over 40 years on this remote sliver of land in the Northwest Atlantic Ocean.  Sable is the French word for ‘sand’ and Sable Island is translated to be ‘Island of Sand’, primarily because the little island is 20 miles long and 1 mile wide and has lots of sand dunes.    Geographically, it is a small Canadian island situated 300 km (190 mi) southeast of Halifax, Nova Scotia, and about 175 km (109 mi) southeast of the closest point of mainland Nova Scotia in the North Atlantic Ocean.  The island is staffed year round by three federal government staff, rising during summer months when research projects and tourism increase.  Notable for its role in early Canadian history and the Sable Island horse, the island is protected and managed by Parks Canada, which must grant permission prior to any visit. Sable Island is part of District 7 of the Halifax Regional Municipality  in Nova Scotia. The island is also a protected National Park Reserve and an Important Bird Area.  This documentary heralds the beauty of the island’s natural environment and would definitely serve as a tourist promotion for the place.

The film is shot on 16mm and created using a scope of innovative eco-friendly filmmaking techniques, this feature-length experimental documentary is a playful and reverent collaboration with the natural world.  There are beautiful shots of the sands of the island, the free range horses as well as the bugs and scans of Zoe going through the horses’ dug.  She can find valuable information from the shit, she says, like where the horses have been and their pregnancy history.  There is one scene where she captures a spider that is spinning a web amidst  chunks of dung.

Zoe also leads the audience among wild horses, seals and bugs, through peaks, valleys, roots, sands, weathers, seasons and stars. The intangible is evoked with hidden sounds and vanishing light. Much like a field book, the film tracks its protagonist's labor to collect, clean and document marine litter that persistently washes up on the island shores.

The sight of seals coming on to the shores make the film’s most moving moments, especially in the segment where the other loses a pup.

Pollution also comes into the picture, unfortunately.  Zoe collects samples of all the trash and litter washed on the shores which comes from all over the world.  She logs the litter - what it is, where it comes from (Canada, the U.S. Russia etc), the company that makes it and the quantity.    The plastic found in the bellies of dead birds and fish is a big problem.  More than 70% of the dead birds have plastic in their bellies. 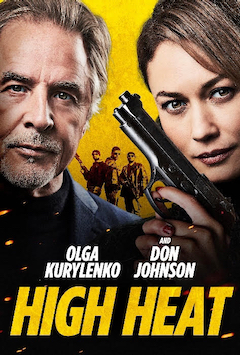 HIGH HEAT the film is so-called because there is a lot of heat (and tension) in the kitchen of the newly opened restaurant.  An ex-KGB operative turned chef, Ana (Olga Kurylenko) is targeted by the local mafia in a hit on her new restaurant to collect on her husband's (Don Johnson) debt.  Now, Ana must rely upon her lethal skills as she goes on a deadly rampage to take out the entire crime syndicate one-by-one to save her restaurant and survive the night in this action-packed crime thriller.  The reason is the hubby is no fighter.  (He must be quite the lover.)

Pretty females kicking ass have always been favourite and hits among the action crowd.  Every action fan remembers with fondness LA FEMME NIKITA by Luc Besson and HANNAH by Joe Wright,

HIGH HEAT sees an ex-KGB agent, the beautiful Ana (Olga Kurylenko, QUANTUM OF SOLACE) who has quit the service to pursue  a normal life which includes setting up a posh restaurant.  She has put everything she has into her new restaurant, a French one that includes the word ‘etoiles’ and it is opening night.  She has to prove herself.  And with the help of her husband, the  much older man played by Don Johnson.

Where does the action come from and what will prompt Ana to utilize her fighting skills?  Husband is apparently quite the gambler and has amassed quite the amount of debt that he cannot pay off.  Enter into the equation  John and his son and their heavies.  They want to burn the restaurant and claim the insurance money.  Ana is unaware.  Her husband is unaware that she was a former KGB.

All this makes quite interesting fare with the added bonus of an assortment of interesting supporting characters that includes a pair of twins constantly complaining about their parents; Mimi's best friend with a grudge and the villain’s idiot son.  Add in the romance between Ana and her husband and the true love they have for each other, and what we might have is a different and more interesting action comedy.

Unfortunately, HIGH HEAT is executed without much flair and everyone appears to be going through the motions.  The fighting scenes are nothing out of the ordinary, even the fight in the restaurant kitchen, similar to the one seen in the recent film, THE MENU.  Even the catfight between Ana and Mimi lacks excitement and could have been done away with.

HIGH HEAT opens in theatres and on demand and VOD December the 16th.

REVIVAL 69: THE CONCERT THAT ROCKED THE WORLD (Canada/France 2022) ***
Directed by Ron Chapman 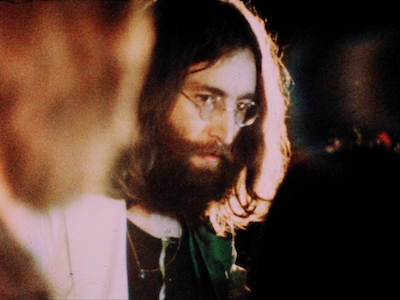 Spectators around the number of 100,000 with lots of celebrities that show up, under the radar.  Was John Lennon present?  One scene had Alice Copper throwing his guitar right out at the spectators.  This is a concert for Toronto that took place in September of 1969 that turned out to be a major world event.

Coined "the second most important event in rock & roll history," the Toronto Rock & Roll Revival was a one-day event held at Toronto's Varsity Stadium.  With a lineup that included Little Richard, The Doors and Alice Cooper, Revival was expected to be a can't-miss event. But, when ticket sales unexpectedly fizzled, resulting in a near cancellation, promoters John Brower panicked and needed a solution.  .He has already borrowed a huge sum of money from a biker gang head. At the 11th hour, he invited John Lennon to perform.  Astonishingly, he said yes.  Featuring the first-ever performance of John Lennon and The Plastic Yoko Ono Band, this priceless cinematic archive transports the viewer directly to that legendary day in 1969. Delight in this faithful documentation of the legends on stage, the mavericks behind the scenes and the audience who witnessed history in the making.

The doc looks into the purpose of organizing such a concert.  The scene and purpose of the rock and roll revival is to put all the celebrities out on stage at the same time.  Chuck Berry, Jerry Lee Lewis, Bo Diddley would sell out the tickets.  Alice Cooper was not a well known name at the time.  But things do not happen as planned.

The film mixes animation when it can.  For example, trying to convince Yoko and John Lennon to come to Toronto, animation shows the couple with a 20-year old arts critic in conversation.   Animation also shows their arrival at the Toronto airport and escorted by the biker gang to the Varsity stadium where they performed.

Besides all the glamour of the rock and rollers, the doc also examines the business side of promoting and execution of such a huge event.  For the second big Revival 69 of the fall, the tickets were just not selling.  Close to the concert date, they had sold only 2,000 while 9,000 needed to be sold.  That was then when Lennon and Ono were needed to be present to sell the tickets and draw the crowds.  John Brower and Ken Walker were the promoters faced with many obstacles.  Few docs show the behind the scene troubles of putting up a concert.

The best moments are the archive footage of live performances at the concert by Bo Diddley, Jerry Lee Lewis and Chuck Berry.  The sight of the spectators just dancing and getting high also creates the spirit and liveliness of the event.  The doc also shows Lennon puking just before performing on stage and Ono’s weird performance under a bed sheet.

REVIVAL 69 has played at many doc festivals around the world.  It finally gets an opening in Toronto.