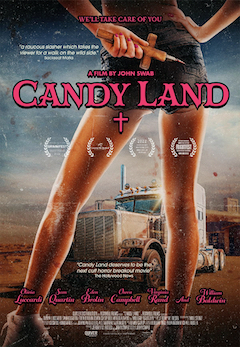 Director John Swab begins his film CANDY LAND and establishes the film setting surely with nasty scenes of blow jobs, riding and toilet sex as the audience is first introduced to young, pretty Riley (Eden Brolin) and the other ladies of the truck stop who have no qualms at satisfying men, no matter what shape or size they may be.  Riley appears to be the film’s protagonist but soon, the lead character shifts from her to Remy (Olivia Luccardi) the newbie and youngest girl.

That is not the only thing that is shifted in the film.  Director John Swab also shifts his film to a slasher horror flick in the second half.

However, in truth, the audience soon learns that Remy is a seemingly naive and devout young woman, who finds herself cast out from her religious cult.  With no place to turn, she immerses herself into the underground world of truck stop sex workers a.k.a. "lot lizards," courtesy of her hosts, Sadie (Sam Quartin), Riley (Eden Brolin), Liv (Virginia Rand) and Levi (Owen Campbell, X).  Under the watchful eye of their matriarch, Nora (Guinevere Turner, from AMERICAN PSYCHO), and enigmatic local lawman, Sheriff Rex (William Baldwin).  Remy navigates between her strained belief system and the lot lizard code to find her true calling in life.   Remy looks innocent enough but the innocence soon fades away as she turns to become the slasher killer of the story.  The ladies, Levi included, encounter the occasional vicious asshole customer that director Swab quickly delivers a violent penance.

A native of Tulsa, Oklahoma, John Swab delivers films (the soon to be released LITTLE DIXIE and BODY BROKERS) that are based upon prevalent themes from his life, including addiction, abuse, crime and redemption.  CANDY LAND is a weird one.  It is hard to see where the film is heading.  This is a good thing as predictability seems to be the main flaw for most films lately.   Fresh and unpredictable turns are always welcome in films.

There is also the question of how the audience relates to Remy, whether she will be a likeable character or the opposite.  It turns out that director Swab does not really bother nor has a message in his film.  His film just moves towards its violent end.

Despite the controversial subject, director Swab notes his film merrily though violently, making his film an intriguing watch interspersed with the frequent sex encounters of the lot lizard.   Despite the straight sex that is on sale, the film contains a lot of gay content and gay related content.  Levi is a guy who also provides service to the truckers.  Sheriff Rex appears to be in love with this straight man who is able to provide services to men.

The cast perform well and deliver credible performances with William Baldwin being the most well-known of the cast.   The atmosphere and mood of the destructive environment is also effectively created by director Swab.

CANDY LAND Opens on January 6th on Digital and in Select Theatres. 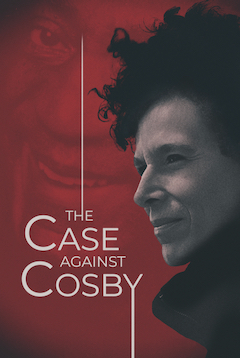 Like the recent SHE SAID, THE CASE AGAINST COSBY is a film that riles the audiences anger against sexual perpetuators who abuse and rape young women.   While SHE SAID has the villain Harvey Weinstein under examination, this doc features an equally abusive offender.  It is interesting to observe the different methods these two offenders use to abuse their victims.

William Henry Cosby Jr. (widely known as Bill Cosby from the popular THE COSBY SHOW) is an American stand-up comedian, actor, and media personality. He made significant contributions to American and African-American culture, and is well known in the United States for his eccentric image, and gained a reputation as "America's Dad" for his portrayal of Cliff Huxtable on The Cosby Show until…….

The doc appropriately titled, shows Cosby, the subject of numerous sexual assault allegations which became highly publicized in 2014, after stand-up comic Hannibal Buress brought the allegations back into the public spotlight during a stand-up routine.  Following the allegations, media organizations pulled reruns of The Cosby Show and other television programs featuring Cosby from syndication. In 2018, he was convicted of aggravated indecent assault against Andrea Constand. He was imprisoned until the conviction was vacated in June 2021 by the Supreme Court of Pennsylvania, for violations of Cosby's 5th Amendment and 14th Amendment due process rights.  Cosby’s legal issues have continued following his release from prison.

But THE CASE AGAINST COSBY tells more of the extraordinary story of Andrea Constand, the only Cosby survivor to gain a conviction out of the sixty-three women who have come forward to accuse Bill Cosby of sexual assault. This is her story. In her own words: "The Andrea that walked in the door that night, was not the Andrea who walked out the door … and my life has never been the same.”  Andrea, a female gay basketball player, came across Cosby who championed basketball in her college.  One thing led to Cosby eventually raping her.  The doc follows Andrea’s use closely, with interspersed interviews with her sister and mother.  The trauma is narrowed upon by director Wookey who follows  Andrea’s road to recovery from the trauma after going through counselling with 4 other victims who  have come forward, under world-renowned physician and best-selling author Gabor Matéo her fellow victims.  The doc shows the strengths of the victims as they share their personal emotions.  But the system basically allows the sexual perpetrators to be jailed for a short period of time and then let go, as in the case of Cosby.

“The following program contains mature subject matter.  Viewer discretion is advised.”  These words appear on a black background around a dozen times during the documentary.  One understands the message and it is puzzling the reason the message is repeatedly broadcast.  The words can be said to be used to separate segments from each other.

The documentary airs on CBC and CBC Gem on Sunday, January 8th, 2023.